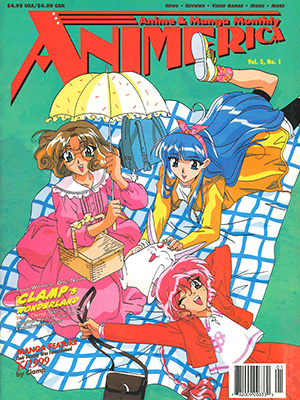 The prospect of an anime series dubbed and edited for American children’s TV is, now more than ever, a touchy subject for today’s demanding otaku. Balanced against the appeal of “free” anime, fans have often had to contend with bizarre name changes, the obscuring or even destruction of entire plotlines, and the cutting of crucial footage for the least bit of violence or lewd conduct. But despite the inevitable plot alterations (and the omission of creator Akira Toriyama’s notorious dirty jokes and puns), the enormously popular DRAGON BALL animation managed to remain almost completely intact for its American TV debut.

As many may know, DRAGON BALL is Toriyama’s own bizarre take on the classic Chinese tale, “The Journey to the West.” In actuality, DRAGON BALL bears little resemblance to the original story, save for monkey-like main character Son Goku and his extending staff. I’m told that many aspects of the original tale are subtly hinted at, but it’s fairly obvious that no effort is being made to be particularly true to it.

In CURSE OF THE BLOOD RUBIES1, the story begins quite simply–the bloated king of a small country is cursed, unable to satisfy his appetite, and so is doomed to a life of nonstop eating. To keep food stockpiles high, he has his army constantly deployed, harrying the citizens into mining the valuable blood rubies underground. Not only that, the king’s soldiers are looking for the dragon balls, mystical gemstones which, when all seven are gathered, can call forth the Eternal Dragon to grant a single wish.

Meanwhile, Goku, having finished beating a predatory fish several times his size into submission, is dragging the carcass back to his hut for dinner. Quite literally, he has a run-in with a blue-haired teenage girl…she crashes her car into him. Her name is Bulma, and it turns out that she has built a special radar for locating dragon balls, hoping to gather them all and wish for the perfect boyfriend. Impressed with the plucky kid’s seemingly indestructibility, as well as the fact that he owns one of the balls, she invites him along for the ride.

After that, the rest of the supporting cast are introduced at warp speed–after all, it IS a pilot movie. Goku and Bulma meet inept desert bandits Yamcha and Puar, quickly followed by shape-changing pig Oolong, as well as Penny, a little girl who fled the land of the blood rubies for help after watching her father being beaten by the soldiers. After meeting Master Roshi and his drawling turtle, the group makes a beeline for the kingdom, where the rest of the dragon balls are located.

First of all, the dubbing is absolutely superb–longtime fans will notice virtually no change in voice characterization from the Japanese. Goku comes across as wide-eyed and innocent; Bulma, a gung-ho airhead; Yamcha, brash and bashful, Oolong is irritating and cowardly, and Master Roshi is a nutty old man, if not quite so lewd as in the Japanese version. Aside from that, Toriyama’s sleek, distinctive, almost cartoony character designs (you’ll recognize his style from the video RPG Chrono Trigger) make the jump from anime to manga [sic] very well. There’s even new music (although the new theme song leaves a bit to be desired, lyrics-wise).

Finally, despite the central motif of the dragon balls, the story itself is not about wish-fulfillment–it’s about the dizzy joy of watching Goku gleefully kick the stuffing out of bad guys the size of small buildings, and the sheer amusement of seeing Toriyama’s bizarre vision of earth unfold, replete with all its strange architecture, hilariously out-of-place stereotypes (cowboys and indians?), and anthropomorphic animals.

All told, DRAGON BALL is incredibly entertaining. It’s suitable for the whole family, with a great story and an engaging cast of characters. CURSE OF THE BLOOD RUBIES itself is entirely self-contained, making it an excellent way to introduce new fans to DRAGON BALL or to anime in general. 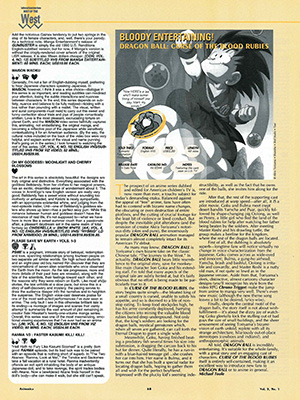 The following historical notes are included for the benefit of the reader as supplemental information and were not originally published in the book.
1 The first theatrical Dragon Ball film, which debuted in Japan in December 1986. After this initial edited/dub-only release, the film would not see an uncut/bilingual release in America until 2010!
Transcription & Notes: VegettoEX
« Previous Page
Press Archive