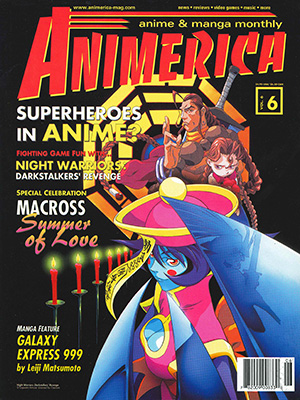 Are There No Superheroes in Anime?

It may seem like a silly question to ask. Superheroes are the exclusive domain of America, you might say. In contrast to American comics’ marching legions of crayon-colored, spandex-clad characters, anime seems so, well… realistic, even counting its own ranks of psychic teenagers, aliens, and demonic invasions. But a superhero encompasses more than just a set of inhuman powers, a pair of tights and an outrageous name–it evokes a state of mind. And looking at anime from that perspective, without even touching on Japan’s hordes of fictional (and real) samurai swordsmen or TV’s live-action hero teams, it’s obvious that the superhero is alive and well and thriving in Japan.

Akira Toriyama’s Dragon Ball offers the most obvious example. Although inspired by the Chinese legend of the Monkey King, Dragon Ball‘s main character, Goku, has an origin nearly identical to that of Superman (sent from his soon-to-be-destroyed planet to Earth in a space life pod, although with a whole different set of motivations), and as the series progresses into Dragon Ball Z, the story focuses more and more on fighting–not just fisticuffs and martial arts, but energy blast-a-thons that rival the most pyrotechnic superhero battle. Throughout DBZ, Goku and his ever-increasing cast of friends fight the endless universe-shaking battles against ever-increasingly powerful enemies. Show Dragon Ball Z episodes to any hardcore fan of superhero comics, and something close to Nirvana is the inevitable result.

Games, especially fighting games, are another avenue to power for the anime superhero. Anime adapted from fighting games are wholly different creatures from more traditional anime genres such as sci-fi, romance, or giant robots. In game anime, the heroes are not so much characters as icons, just like in superhero comics–their powers and appearances are the most important things about them. They exist as immutable concepts–they can be drawn by different artists, and their personalities may change depending on the writer, but as long as they retain their essential iconic nature, all is well. By that token, Superthief Lupin III and his cronies, Goemon, Jigen, Fujiko…even Zenigata, also qualify–not only do they each have clearly defined “powers,” they’ve long since become more icons than individual characters, written and animated by a wide variety of creative teams, each with their own take on the Lupin legend.

Given this definition of game-based characters as a starting point, it’s no wonder that so few anime adaptations of games are really successful. It’s no easy task to take characters whose very purpose is to be the tabula rasa onto which the game player projects and translate them into beings that walk and talk like you or me. Often, in their anime versions, game characters become too human…or too anime. The Street Fighter II V and Virtua Fighter anime TV series are both highly enjoyable, but as anime series rather than adaptations of their respective games. Conversely, Street Fighter II: The Animated Movie is more in tune with a gamer’s qualifications for the perfect anime rendition–the characters look as you expect them to look, behave as you expect them to behave, and perform their signature moves, all in gorgeous animation.

“There’s this Street Fighter II poster that’s given me a lasting impression,” said Gisaburo Sugii, director of Street Fighter II: The Animated Movie, in his 1996 ANIMERICA interview. “They all had these military planes, but then they just had the fighters from all the various countries standing in front of them, not even facing each other…I wanted the characters [in the movie] to be just standing there, unchangeable, including their clothes, just like they seemed in the poster.”

If that’s not iconic, what is?

Of recent productions, Night Warriors: Darkstalkers’ Revenge (Japanese title: Vampire Hunter) gives us perhaps the most clear-cut case of anime superheroism yet. With its larger-than-life heroes and villains (forming team-ups throughout the series, no less), bizarre power displayers against smash-’em-up drones, and existential overtones, Night Warriors seems like a mad microcosm of a platinum-age comic book universe. Scratch Night Warriors deeply enough, and you’ll find The Uncanny X-Men just below the surface. Even the “Humans vs. The Darkstalkers” plotline shimmers up at the viewer like a reflection of X-Men‘s Homo sapiens vs. Homo superior. Game-based anime may have gotten its first real taste of comic book-style angst with Terry Bogard’s tortured-soul characterization in Fatal Fury, but Night Warriors‘ half-breed Vampire Hunter Donovan elevates existential trauma to a whole new level. “I must admit some fascination to the sight of my own blood,” he intones. “It is tainted. Let it drain away.”

But how does this all qualify as different from the Japanese hero tradition? As noted previously, Japan’s historical samurai warriors have frequently been elevated to superhero status in anime and manga (as any anime production featuring ninja proves) and live-action costumed heroes such as the Mighty Morphin Power Rangers are still going strong. But despite this abundance of local heroes, American comics such as X-Men and Spawn have been gaining a fan following in Japan over the past few years. Popular artists such as Jim Lee are inspiring manga imitations of American comics (such as the X-Men manga now being imported back to the U.S.!) and–dare we say it?–maybe even influencing the direction of some anime productions. The X-Men animated series familiar to American Saturday morning-viewers airs in Japan as well, although with a new, anime-style opening credit sequence that has been known to make X-Men fans green with envy. (One wonders why no Street Fighter vs. X-Men animation has been produced…at least not yet.)

What’s the future of super-powered anime? Given the trend toward U.S./Japan co-productions and Japanese studios being hired to animate American comics such as Warrior Nun Areala and Satanika, the anime superhero seems to be on the rise. For fans who want to see their favorite games and comics animated the way they’ve always dreamed, this is a very good thing. Game-based anime may be only a tiny portion of all anime available, and an even tinier portion of all that’s ever been produced…but when Japanese animators do decide to put on the mask and tights of the superhero, the result is really something to see. 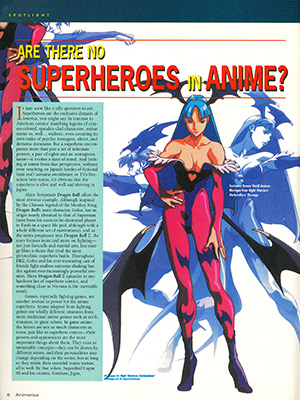 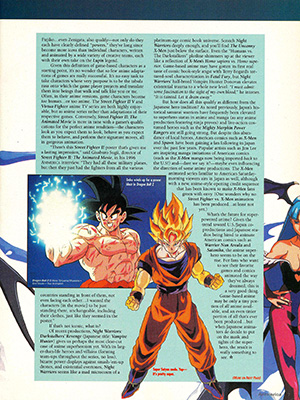