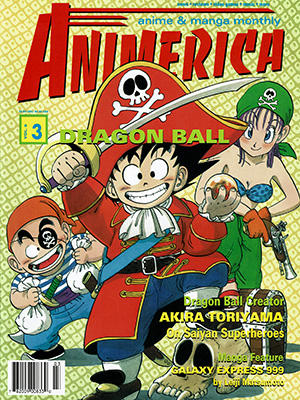 This month’s cover story: see what you can get

Akira Toriyama’s manga debuts this month in English from Viz Comics, in two separate comics–Dragon Ball and Dragon Ball Z. Dragon Ball starts right at the beginning with the manga story, just like the Dragon Ball TV show aired in the U.S. It’s the story of the monkey-tailed child Goku, and his companions Bulma, Oolong, and Yamcha on their quest to find the seven Dragon Balls. Meanwhile, the more action-oriented Dragon Ball Z leaps ahead of the “Saiyan” saga, as seen on TV, beginning with the introduction of (now adult) Goku’s brother Raditz. Each contains 32 b&w pages, and retails for US$2.95. The English adaptation for Dragon Ball is by Gerard Jones, with lettering by Wayne Truman (X/1999). Editing duties on both series are performed by longtime Dragon Ball fan Trish Ledoux; you can expect to see many tidbits and cultural notes on the story and its many in-jokes as the series continues.

Aside from Toriyama’s manga, Dragon Ball fans can look forward to seeing more merchandise from Bandai America, such as action figures, trading cards, and a Super Nintendo video game1, plus Dragon Ball GT: Final Bout for the Sony PlayStation. Deluxe Dragon Ball T-shirts are also available in a variety of designs from Oleas, on sale in most Miller’s Outpost stores and in many mail order catalogs for US$12.00 to US$18.00 retail, in sizes from medium to extra-large. Last but not least, don’t forget the Dragon Ball and Dragon Ball Z video series, available from Pioneer Entertainment in the TV version (for the younguns) and as uncut episodes and movies, on English VHS and DVD…even subtitled! 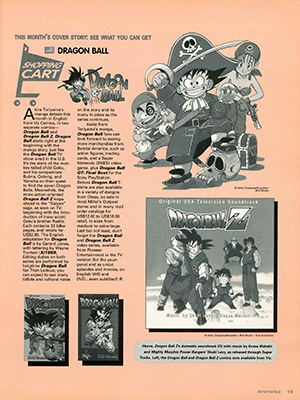 The following historical notes are included for the benefit of the reader as supplemental information and were not originally published in the book.
1 Outside of this and one other article, we know of no announcement or indication that any Super Nintendo/Famicom Dragon Ball game was planned for an American release (though several did see the light of day localized in Europe).
Transcription & Notes: VegettoEX
« Previous Page
Press Archive