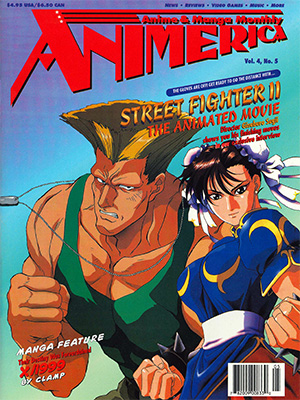 Best of the East – The Import Report

“Hi! I’m Mai Anime™. This section is where I get my smart-alecky friends to give you advice–whether you need it or not–on the latest import-only anime TV shows, OAVs, and movies (plus the occasional live-action show). While I’ve got your attention, has anyone noticed that the Major’s actin’ even weirder than usual lately…?”

Dragon Ball GT
Based on DRAGON BALL by Akira Toriyama

This newest addition to the series takes us back to more like what the beginning of the story felt like. If you’ve never seen any DRAGON BALL, start now. No, I mean RIGHT NOW. Action, fighting, silly stuff and a blast from the past (I never thought I’d see those guys again!). Watch it! The kids are all right.

Hey, this is great! DRAGON BALL returns to its roots–those like me who’ve only seen DB in English2 can pick this one up from the beginning without (more or less) skipping a beat. I like Pan a lot–tough chicks like her are still a little hard to come by in any medium. DRAGON BALL in space? Looks like good, zany fun!

I somehow missed the entire DBZ phenomenon, but I did see the English version2 and found it most adorable. Watching the first GT episode, it really bugged me to see adult Goku still sporting the same big googly eyes and squeaky little-boy voice, and I heaved a huge sigh of relief when we reverted to its original kiddie form. This could be quite fun, but I dunno what DBZ loyalists will make of it.

Goku–now little again!–has one year to assemble the dragon balls now scattered throughout the universe or it’s zetsumetsu5 time. There’s enough charm to make even Piccolo smile (you’re gonna love the returning “guest villains” in Ep. 1), and fierce yet girlish Pan (Goku’s granddaughter!) is a wonderful addition to the roster of heroes. Frankly, when DB ended in JUMP, I was skeptical this could prove worthy. Happily, I was wrong.

Cha-la, head cha– Aw, you know the tune. Two X/1999-like destinies stretch out before this one: worthy successor to one of the world’s most popular anime series ever, or half-hearted merchandising machine that will not die. I’m hoping for the former.7 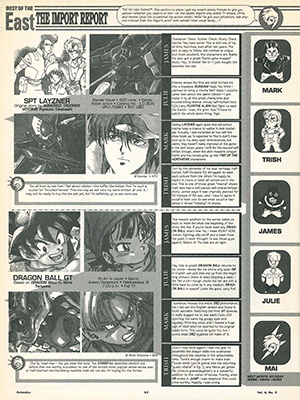 The following historical notes are included for the benefit of the reader as supplemental information and were not originally published in the book.
1 James S. Taylor
2 (Both citations:) At this point, just the original Dragon Ball TV series; FUNimation’s Dragon Ball Z English dub would not debut on syndicated broadcast television until later that year in September.
3 Julie Davis
4 Mark Simmons
5 絶滅 (zetsumetsu); “extinction” or “eradicate” or “exterminate”
6 Trish Ledoux
7 This quote on the page is designated with an icon for and attributed to “Mai,” the section’s mascot character.
Transcription & Notes: VegettoEX
« Previous Page
Press Archive