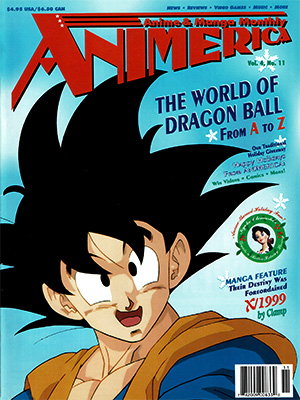 Posters! Toys! Action figures! In the history of the world, few anime or manga series indeed have created such a tide of merchandise, or such a number of fans who were eager to buy anything and everything associated with it. Presenting a quick look at the DRAGON BALL merchandise craze from a man who’s living on the front lines, anime merchandise retailer (and ANIMERICA Mascot 1/2) Brad “Trunks” Diederichs

As anyone who’s ever traveled to Japan (or Asia in general, for that matter) know [sic], if you were to go into just about any shop or toy store during the time that DRAGON BALL was on the air, you would find the show’s logo on almost everything from DRAGON BALL action figures, dolls, playing cards, trading cards, school supplies, snack foods, gumball machines, clothing, even DRAGON BALL cooking utensils! Comparing the DRAGON BALL craze in Japan with the current American passion for MIGHTY MORPHIN POWER RANGERS, the closest stateside equivalent, doesn’t even come close.

In addition to all of the above items, the products that have perhaps enjoyed the most success are the video games (see this issue’s AV Interface for more info). Many RPG or role-playing games based on DRAGON BALL and DRAGON BALL Z have been released in Japan, and with the current rage for fighting games of any stripe, a very successful series of DRAGON BALL Z fighting games for virtually every game platform ever designed have sold like hotcakes in both Japan and Asia in general.

Even here in the U.S., if you go to just about any anime/manga convention in the country, you can find DRAGON BALL Z video game tournaments (just look for the huge crowds!), where the DBZ-addicted go head-to-head for the Tenka-Ichi Budôkai crown. Bandai–the company that owns the rights to all DRAGON BALL merchandise, and almost all other toys produced in Japan–is still producing new DRAGON BALL games for such systems as the Sony PlayStation and Sega Saturn, and their popularity show no sign of slowing down any time soon.

Now that Akira Toriyama’s DRAGON BALL comic and the animated show DRAGON BALL Z have both finally come to an end in Japan, the popularity of its merchandise may taper off somewhat, but here in the U.S., where the animated show has only barely begun to find its audience, DRAGON BALL is still a hot seller, both at anime/manga conventions, and in stores that feature Japanese merchandise. I recently spoke to the owner of one such store (Comic Anime in Woodbridge, VA), who tells me that DRAGON BALL merchandise is so popular in his area, his store now specializes in DRAGON BALL. Reportedly, some of the more frequently purchased items are the DRAGON BALL Z action figures, wall banners and, of course, video games. (Here’s a word to the wise: If you go to a store that sells used video games, look for a Nintendo game called Dragonquest. It’s the American version of the DB Famicom or NES game, and the best thing is, if you can manage to find it, is that it’s cheap.1)

So far, in terms of merchandise created to promote the U.S. version of the show, the selection is mostly limited to action figures and small figurines. However, more loot is on the way, and with DRAGON BALL Z finally on-air in America, perhaps it won’t be long until we experience our own version of “merchandise madness.” 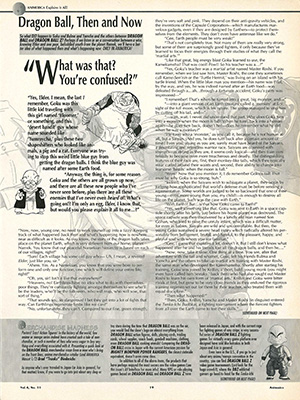 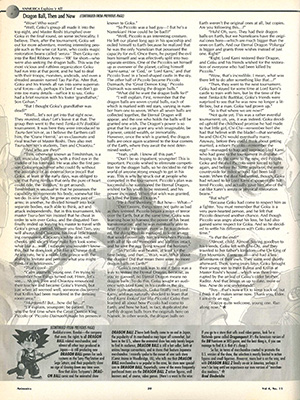 The following historical notes are included for the benefit of the reader as supplemental information and were not originally published in the book.
1 The article’s author appears to have confused Dragon Warrior (the domestic version of the role-playing game Dragon Quest, which Toriyama did in fact contribute character designs to) with Dragon Power (the domestic version of the action-adventure game Dragon Ball: The Legend of Shenlong).
Transcription & Notes: VegettoEX
« Previous Page
Press Archive