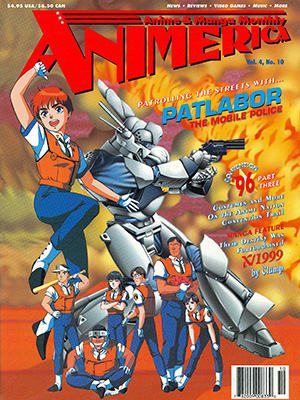 Yes, it’s true. The new fall TV season may have seen SAILOR MOON leaving U.S. syndication in many parts of the U.S., but not all news is bad news. There’s new anime to be found on TV these days–DRAGON BALL Z and EAGLE RIDERS! Saban Entertainment, distributor of both shows, is perhaps best known for live-action series such as MIGHTY MORPHIN POWER RANGERS (and its next-generation sequel POWER RANGERS ZEO, with footage drawn from the Japanese sentai or “hero-team” show O-RANGER), MASKED RIDER (KAMEN RIDER) and the new BEETLEBORGS (B-FIGHTER), but the company also produces or distributes quite a lot of animation, including X-MEN and TEKNOMAN (a.k.a. TEKKAMAN BLADE).

DRAGON BALL Z continues the story begun with DRAGON BALL, as seen recently on U.S. TV, though much farther into the future.1 Goku is now a full-grown man, with a wife (remember Chi-Chi, she of the ULTRAMAN-like axe-blade helmet and metal bikini?) and a monkey-tailed son, Gohan. With a handful of friends, Goku has to face the mance of the Saiyans, super-powered begins so strong that it only takes one Saiyan to destroy the populace of an entire planet. But oddly enough, Goku himself belatedly realizes that he himself is a Saiyan as well, one who was sent to Earth as a baby, programmed to destroy the planet on maturity. But a near-fatal head injury scrambled his programming, allowing him to grow up as the pure-hearted innocent he came to be. Goku’s team of adventurers (along with his family) includes Master Roshi, the former “Turtle Hermit,” Krillin, Piccolo, Yamcha, Bulma, Tien, Chiaotzu and Yajirobe. Will their combined powers be enough to face the villains of the piece, including Raditz, Vegeta, Nappa and Saibaimen2? [Look to next month’s feature for more info on the DRAGON BALL universe–Ed.] Like DRAGON BALL, the U.S. TV version of DRAGON BALL Z is produced by FUNimation, and–voice-actor fans take note–English voice-work is handled by Ocean “RANMA 1/2” Studios. Keep your ears open for some familiar anime-in-English voices!3

EAGLE RIDERS adapts the Japanese TV series GATCHAMAN II, the animated sequel to SCIENCE NINJA TEAM GATCHAMAN, seen on American TV in the 1980s as BATTLE OF THE PLANETS. In EAGLE RIDERS, the Gatchaman team are, of course, called the “Eagle Riders,” and fight against the nefarious “Vorak,” aliens who are dedicated to the total domination of Earth, and the enslavement of its inhabitants. With the help of the Global Security Council’s Dr. Thadeaus Keane, and their ship, the Ultra Eagle, the Riders are ready to fly into action instantly to anywhere on Earth or space. But unknown to the Eagle Riders, the Vorak’s evil leader, Mallanox, is nothing but a hired gun for another, more powerful organization, Cybercon!

The Eagle Riders are led by the brave and handsome Hunter Harris (in Japanese, Ken the Eagle). Hunter’s father died a hero’s death in the military, and following in his footsteps, his son is now a serious and dedicated man, with no time for fun. Second in command is Joe Thax (Joe the Condor), whose tragic death was the highlight of the first GATCHAMAN series. Resurrected as a cyborg, Joe is as much the angst-ridden loner as ever. The beautiful Kelly Jenar (Jun the Swan), is the Eagle Riders’ mechanical engineer. She also runs a coffee shop where the heroes hang out in their spare time. Ollie Keeawani (Ryu the Owl) is the Riders’ truly navigator, with a hearty laugh and a wry sense of humor, while Mickey Dugan (Jinpei the Swallow) is a high-spirited teenager. As a team, they possess unparalleled fighting skills (remember, it’s “Science Ninja Team”), as well as a lot of nifty gadgets, such as the G-1 “Superhawk,” G-2 “Falcon Tracker,” G-3 “Dove Cycle,” G-4 “Bird of Paradise” and G-5 “Owl Cat.” 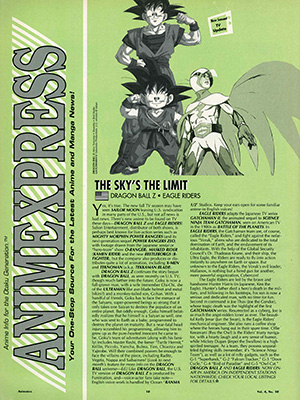 The following historical notes are included for the benefit of the reader as supplemental information and were not originally published in the book.
1 FUNimation produced 13 episodes of the original Dragon Ball TV series in English for the fall 1995 syndication season. They moved on to Dragon Ball Z for fall 1996.
2 Interestingly, the article uses the correct “Saibaimen” transliteration here, rather than the “Saibamen” spelling/pronunciation that FUNimation went with, despite the rest of the article also using FUNimation’s dub names and spellings.
3 Viz, the publisher of Animerica, was also responsible for the English translation and adaptation of both the RANMA 1/2 manga and anime in America.
Transcription & Notes: VegettoEX
« Previous Page
Press Archive