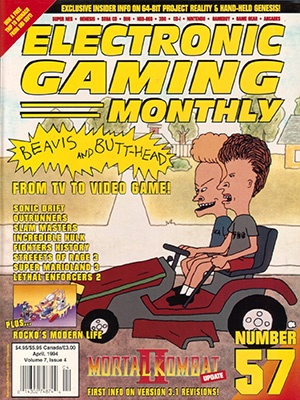 It’s back and better than before! Dragon Ball Z Super Futoden [sic] 2 offers the same action and fun as the first game, but now has new characters, more detail in the backgrounds and the Ultimate Power Moves pack even more wallop! There isn’t much need to go into detail over character moves since there is a handy Command Help Mode where you can see the moves to any character in the game. So this time around, we’re going to focus more on super strategies and special tips you won’t find anywhere else.

Dragon Ball Z 2 features the same premise as other fighting games, but has enough interesting features to make it stand out above the crowd. First, the stars are from a very popular manga and anime series in Japan. Not surprisingly, the series’ popularity is really catching on here.

Engage in one-on-one combat with other characters from the series. Those who’ve played the first game can remember the huge playing field. Well, it’s still here but now the Ultimate Power Moves can be performed anywhere on the screen!

Each new character has a new arsenal of standard moves as well. If you’ve got the original, or you’re looking for something new, Dragon Ball Z 2 will, without a doubt, offer new thrills that wimpy street fighting games can’t match!

■ Photo
Don’t you just hate people who love to throw? This game lets you extract [sic] your revenge. At the moment your opponent grabs you, tap the L or R button, then press it again and hold it. You’ll get a nice attack out of it and really make ‘em think twice.

Check out these game choices. The Butoden Mode lets you take part in an involving storyline; the Versus Mode lets one or two players engage in battle, while the Budokai Mode is a tournament with eight chosen characters fighting to win.

The Meteo attacks are very hard to whip out, but can be quite devastating. All these moves are accomplished by standing very close to your opponent. The Power Bar has no effect on damage or strength of the moves.

At any time during the fighting, press start and then select. Choose which character you wish to learn by pressing A. Look at the names below for help in figuring out what their names look like.

Move down and highlight the choice shown. Now change the name by moving left or right and hit.

■ Photo
Select the move you wish to see and press A. Now it’s easy to learn all the special moves.

The Ultimate Power Moves are your worst threat in the game. Learning to block these moves is essential to winning. Follow the guide below to give yourself the advantage.

The Ultimate Power Moves are the most deadly attacks in the game. One good blast can really wreak havoc with your strategy.

When a player uses his Ultimate Power, you can retaliate with your own power. Just perform the move shown above and keep hitting the A button to overpower the blast! The Block is hard to pull off.

Now that you’ve seen what you’re capable of, get out there and fight. You’ll find out why Dragon Ball Z 2 is so hot.

You want a game packed with tons of cool tricks to spice up the action? Dragon Ball Z 2 is it! One of the most exciting codes is being able to play as Son Goku and Brawley, two hidden characters. There’s also a Speed-up Code, surrendering and even playing as the radar map man.

At the opening demo, enter this sequence on controller 1:

If you hear a voice, you did the code correctly. Now you’re able to play as Son Goku and Brawley!

On the talking scene right before a fight, press DOWN on the pad five times to play as the man icon in the radar. Now try to play without getting confused.

Hold L and R on controller 2 while turning on the game for turbo speed that’s 1.5 times faster than normal.

Enter the Budokai mode and on the character select screen, hold X and press Select for random choices.

To exit out of a fight quickly, just press A, B, X, Y and Select buttons at the same time to end the match.

■ The Good:
This version is even better than the first. Improved graphics, sound and game play really make it great!

■ The Bad:
Alas, this terrific sequel may never make it to the U.S. It’s a crying shame.

■ The Ugly:
Feeling your thumb turn to hamburger to block the Ultimate Power Moves. 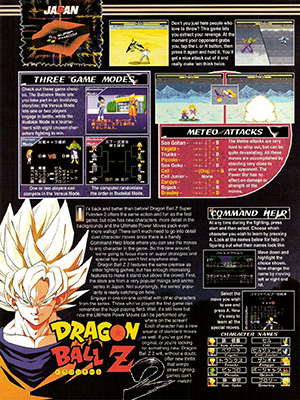 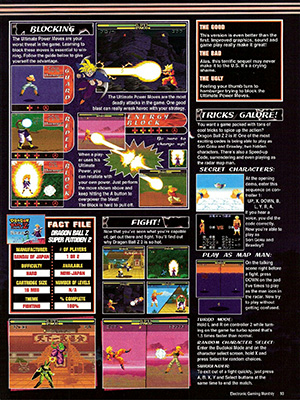