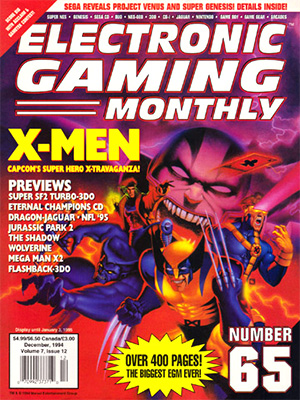 Are you ready for fighting action unlike any other game on the market? Dragon Ball Z 3 takes over where the previous versions left off. It is now much later in the Dragon Ball Z story. However, because the story is still going on in Japan, there is no Story Mode in this game like there was in Dragon Ball Z 2. That’s unfortunate, as the story was a great change of pace from all the hectic fighting.

Dragon Ball Z 3 has a few new cast members. There’s Son Gohan, now fully grown; 18 Gou, a character from DBZ1; Son Goku’s second son, Son Goten, fights alongside his older brother, Gohan; Trunks, the young son of Burma makes his appearance; Kaoshin, one of the four Ultimate Gods holding the Universe together, is here and who could forget the new villains, Dabula and Boo. Of course, there’s still the heroic Son Goku, and the wickedly powerful Vegeta. A winning lineup by anyone’s opinion.

There aren’t a whole lot of new options in DBZ3, but there are some new attacks to be mastered, like the Meteo Smash which replaces the basic Meteo Attacks from the second game, and some new basic maneuvers for several characters.

The combat system still works the same way, meaning that the screens are huge and combat can take place miles away! The ability to crank out combos has been improved with better game play and a faster game speed.

Overall, Dragon Ball Z 3 features some nice improvements and is a worthy purchase.

■ THE GOOD:
The play control has been tweaked even more for better control. Plus, this game is still way too cool!

■ THE BAD:
It almost seems as if this game was rushed. There aren’t a lot of differences between DBZ2 and this one.

■ THE UGLY:
Boo’s fascination with turning people into cookies and eating them. If I’m gonna go, there’s no better way.

The Meteo Attacks from DBZ2 are not in this version. They have been replaced by a new attack called the Meteo Smash! All of the characters, except 18 Gou and Kaoshin, have their own attacks.

These attacks have no effect on the Power Bar so you can do them over and over. To do them, you must be right next to your opponent.

Note: The moves shown are for characters facing right. Reverse them for left-facing characters.

Ah, cheating. There’s nothing quite like it, especially when you can get away with it. Dragon Ball Z 3 has a nifty way to gain the advantage during a fight! All you need to do is enter one of the codes shown on the right of the screen where the two characters are talking, right before the fight takes place.

If the code worked, you’ll see your character perform his or her charge move. Then get set for some real fun. These codes boost your offensive and defensive abilities during the right. The first code improves you a little bit while the sixth code boosts you to the extreme!

Enter one of these codes:

THE STORY SO FAR…

Dragon Ball Z 3 takes place much later in the Dragon Ball Z story than DBZ2 does. The most notable change in this version is that Son Gohan is now grown up, tying the game into the story of the television show that is still on the air in Japan.

Although, Son Goku disappeared from Dragon Ball Z 2 and could only be accessed by entering a code, Goku returns for more fighting action. He is the most powerful character overall, and he has learned a few new tricks while on his leave of absence.

In addition, Goku can dish out some nasty moves like the Slash Down Kick, Jump Knee Life, his infamous Kamehame Ha and his ultimate move, the Super Kamehame Ha. Son Goku has always been a favorite character, so it’s good to see that he made a comeback, Heck, do you think you could survive a battle with Cell?

Like all the Dragon Ball Z games before it, DBZ3 has a few tricks thrown in to make it more exciting.

To begin, there is a Turbo Mode to make the game two times faster than normal–and it’s quite simple.

Before you turn the game on, hold down the A, B, X and Y buttons on controller one. Turn the power on and as you hear the voices, perform clockwise 360 degree motions on the pad while still holding down the buttons. Then, press START on the controller and at the Title Screen. The green ball should now be orange.

Best of all, there’s a hidden character in the game! It’s the grown-up version of Trunks. To access him, enter the following code at the Intro screen where you see Son Goku’s face: Up, X, Down, B, L, Y, R, A. Seasoned DBZ players will recognize this as the same code that brought Son Goku and Brawley to life in DBZ2. The grown-up Trunks can perform the Meteo Smash like the other characters do. His controller movements are unique. You do the motion like the original Meteo Attacks from Dragon Ball Z 2 (i.e., Toward, Away, Down, Up and Y). Have fun, boys and girls.

If you’ve played through Dragon Ball Z 1 and 2, you’re in for a treat. There were some aspects of the game that got frustrating, and thankfully, many of those needed changes have been implemented into Dragon Ball Z 3.

First off, the charge times. As anyone who has played DBZ2 will tell you, charging up your Power Bar was an exercise in patience. DBZ2 required you to wait 15 seconds to become fully charged when you held down the Y and B buttons. Now that time has been reduced to a miniscule five seconds. A big difference in the heat of battle.

Another problem many gamers may have experienced in DBZ2 was that you could only zip to the upper or lower levels of the playing field when the dividing bar was showing on the screen. In other words, if you were getting pummeled in the corner, you could zip up or down to escape the conflict. In DBZ3, that problem has been resolved, and it too makes a big difference in battle.

Although this is a minor nitpick, after you fired off an Ultimate Power Move in DBZ2, you couldn’t move your character for almost two seconds. Whether or not this was intentional, it did throw off the feel of the game. Again, this problem has been resolved in DBZ3, making the combo abilities much greater than ever before.

Credit should be given to DBZ3 for the background details, though. They are very sharp and detailed. DBZ2’s backgrounds look pixelated and have a noticeable lack of color.

Now we turn our attention to what could be in store for Dragon Ball Z 4. First off, there will most likely be new characters to play as, new special moves to learn and new backgrounds, but what about the story? Two characters, Vegeta and Dabula, are killed by Boo in the story line of this game, but that doesn’t mean they won’t be back. And what about the marriage between 18 Gou and Kuririn, and their son?1 It seems that there is more to DBZ than outrageous fighting!

FOR ALL YOU TRIVIA BUFFS…

Those of you who have played all three DBZ games many remember that when you turn the game on, there is a conversation that takes place on the black screen. Did you ever wonder what they were saying? Well, all you trivia buffs, now you can quiz your friends and enemies!

What is a Kakarot you ask? That’s Son Goku’s real name! You get a bonus point if you already knew the answer.

At this time, Son Gohan is now grown up and takes a pseudo lead role in the game. Gohan uses a lot of brute force for his moves, rather than the finesse that many of the other fighters employ.

Some of Gohan’s moves include a Jet Upper that knocks opponents out of the air, the Bakuretsu Punch which will stun you if all six punches hit, plus many more. Gohan is one of the best characters to learn to play with.

The second son of Son Goku, Goten has a look and fighting style that closely resembles his father’s. Son Gohan may be small, but don’t let his size fool you. He packs some strong moves like the Rolling Bomber, Spinning Cannon and the Strike Elboy, a tasty little move to perform while struggling in a battle.

Goten is still young, but he’s already learning what it takes to be a man in battle. Goten is a worthy choice for battle.

Kaoshin is one of the four gods holding the Universe together. As the story goes, Kaoshin killed a creature named Babidi’s Father (read more about that below) and now he must fight again.

Kaoshin is no slouch in the combat department. With knowledge of techniques such as the Shirenkyaku, Kienjin and Crazy Rush where Kaoshin unreleased a fury of punches, Kaoshin seems to be the master of the sneak attacks.

Boo is the result of one creature’s desire for revenge. Babidi, Boo’s master, conjured him up so that he could kill Kaoshin, the killer of Babidi’s father. Boo may look like a cute little baby, but his desire for cookies and combat far outweigh this oversized killing machine.

Boo utilizes powers like the Hip Crash, Power Saito and the Planet Attack which he uses to careen into his opponents. Boo is one of the strongest characters.

Not to be confused with the older version of Trunks, this younger Trunks is the son that Burma gave birth to after the big Cell battle. Trunks grew up with Goten which explains their similar fighting styles. Special moves like the Splashsault, Grand Furl and the Sonic Knuckle, which is a rapid fury of punches make Trunks a fun fighter to use. When fighting against Goten, it’s a pretty even match.

Dabula is Babidi’s faithful sidekick–at least he was until Boo turned him into a cookie and ate him in one of the episodes. Anyway, Dabula’s main weapon is his sword, which he uses with his Meteo Smash attack and his Sword Kiyanos.

This powerful warrior has it all–speed, strength and a hip outfit. While being turned into a cookie must be a bummer, Dabula is a great character for those who demand strength.

Vegeta is a familiar face to Dragon Ball Z players and fans of the show. This compassionless warrior lives for the fight and has the coolest attitude. Vegeta packs a wallop with his Super Dash, Driving Elbow and his Dokuhoha that surprises opponents by striking them from underneath.

Vegeta is the perfect character for those who believe in his no-holds-barred attitude. He has got to be the most fun character to play as.

18 Gou is the only female warrior in the group but she has what it takes to battle with the boy boys. Her arsenal of destruction includes the Hip Attack, Triangle Kick and the Palm Smash in which she smacks you in the head and follows it up with a flurry of repeated hits. It’s very reminiscent of the Zenretsuken attack in Art of Fighting.

18 Gou’s advantage of speed and sneak attacks make her a viable ally in battle. 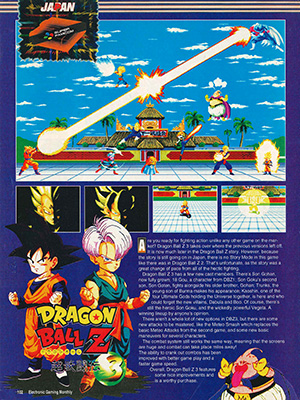 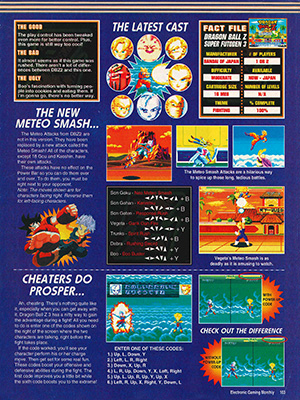 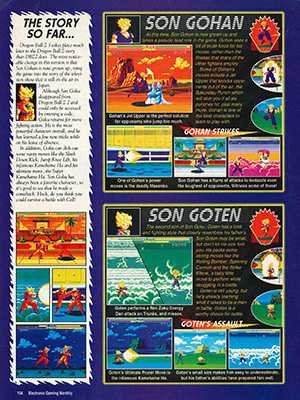 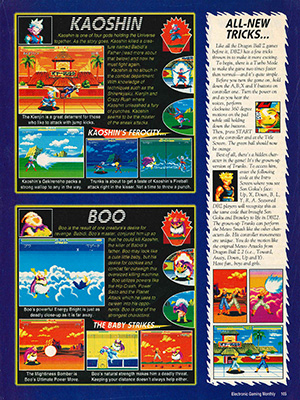 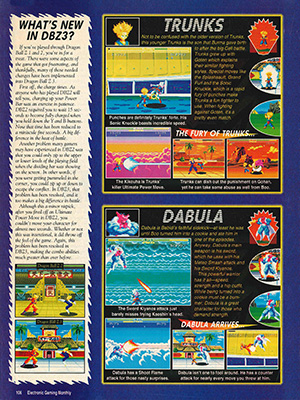 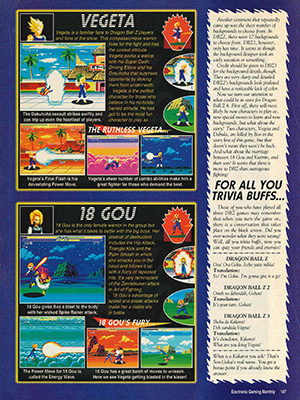 The following historical notes are included for the benefit of the reader as supplemental information and were not originally published in the book.
1 It is unknown why the author refers to a son when the characters have a daughter together. Perhaps their source material in Japanese simply noted a “child” and they made an uneducated guess?
Transcription & Notes: VegettoEX
« Previous Page
Press Archive