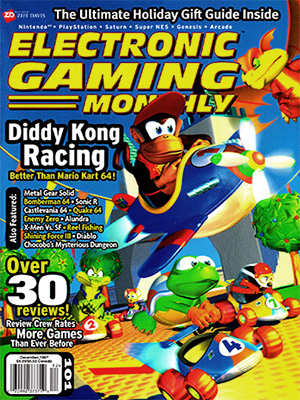 Once in a while, we are graced with a “guru game,” a game that stretches our abilities with a game engine so complex to master, yet simple enough for a beginner, and Dragon Ball GT is one such game. Anyone can pick up the controller and play a few rounds into the game. It will take true fighting masters to unlock the hidden characters, discover the super techniques, and truly beat the game. Modeled after the Dragon Ball anime series, it’s no wonder that the programmers put such great detail into the character personalities. Every character has signature moves and hilarious taunts based on how bad you trounced your foe. Some may turn from the straightforward game, which is essentially, punch, kick, fireball for every character. Dragon Ball GT really gets fun when you learn the various tricks and techniques. To help you along, you can play the Build-up Mode. In this mode, you get to build your fighter’s strength slowly, starting with simple fighters, and working your way up to a real Dragon Ball Master. This approach, rather than the straightforward “Practice” Mode used by other games, seems more effective as you can easily judge your advancement by how many opponents you can defeat. This is also one of the few games available with great voice acting! This is also due to the important link to the anime.

Most fighting games can be put into two categories: Street Fighter-types and Virtua Fighter-types. DBGT dares to break the molds. It’s different, but frankly, most of you won’t like it. The wide-open stages and sluggish controls don’t make for many exciting moments. Knockouts are fun and interesting, but even they get monotonous. The best part of DBGT is the fantastic art (in the game and in the manual). For DB fans only.

Being a Dragon Ball fan for years, it’s good to see Bandai continue to make games specifically for their followers. Compared to the earlier DB games, Dragon Ball GT features smoother animation, more moves, better technique and my favorite, the Build-up Mode. I like the fact that Bandai didn’t sell out and make some Tekken close for the masses with the DB license slapped on it. Dragon Ball GT is the best Dragon Ball game ever.

Dragon Ball GT is…different. Like prior DB fighting games on the Super Famicom, the gameplay is very complex and takes time to get used to–it sure ain’t Street Fighter. Once you do get used to it though, DBGT turns out to be a solid fighter, with loads of technique and depth. If you can get past the sluggish control, and you don’t mind reading a manual to learn a fighting game, you’ll enjoy it. Just know that it’s an acquired taste. 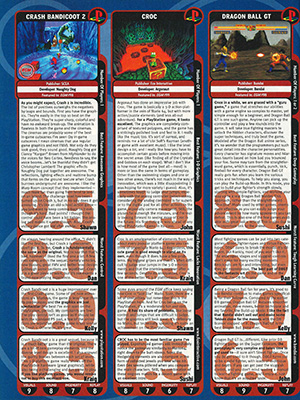 The following historical notes are included for the benefit of the reader as supplemental information and were not originally published in the book.
1 The role of “Sushi-X” was passed down to various staff members and writers over the years.
Transcription & Notes: VegettoEX
« Previous Page
Press Archive