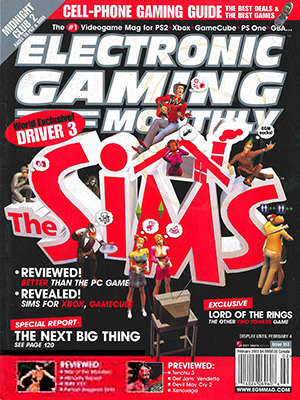 Publisher: Infogrames
Developer: Dimps
Players: 1-2
Also On: None
Featured In: EGM #162
Best Feature: Stays true to the story in every way
Worst Feature: Cinema screens are a little too long
Website: www.dragonballz.com

If every DBZ fan collected all seven Dragon Balls and wished for a good Z fighter, Budokai might be the result: a good fighting game starring everyone’s favorite monkey-boy, Goku, and an ever-increasing horde of powerful alien challengers. Its Story mode follows an abridged version of the Saiyan, Namekian, and Android sagas, pitting you against such memorable foes as Raditz, Frieza, Cell, and the Androids. (If you understood that last sentence, odds are this game’s for you.) In Budokai, you’ll be tossing giant fireballs through the air with ease, just like in the hit TV show.

Once you and your buddies have earned enough skills and mastered Z‘s Story and World Tournament modes, you can customize your fave fighter to be even more powerful. Some of the best strategies? If you’re better at defense, give yourself a life-giving Senzu Bean. Then, when your life bar’s been dreamed, bam–you can use the bean, and you’ll have more energy and time to lay the smack down on your shocked opponent. Or, if you’ve gained the Viral Heart Disease, you can add it to your skills, and it’ll gradually drain your opponent’s life. But if you’re gonna do that, make sure you also equip the antidote; otherwise, your life’ll drain, too.

■ PHOTOS:
All the stuff you like from the show, from King Kai’s monkey bud (above) to lightning-quick combo attacks (below) are in Budokai.

■ PHOTOS:
One of the mainstays of the Dragon Ball series is the projectile energy attack. And Budokai has no shortage of it, as you can see in these screenshots (below and left). But while this attack is powerful, it won’t kill you in one hit–you’ve got multiple life bars that must be depleted before you’re finished.

You might think that in order to enjoy Budokai, you’d have to know all the characters, their powers, and the whole convoluted mess of a story known as DBZ. But that’s not the case. Even if you don’t know Kakarot from Goku (hint: they’re the same person), you’ll appreciate Budokai‘s surprisingly slick, intuitive, and customizable fighting system. At the very least, you’ll be able to tolerate it for a few rounds with your DBZ-fanatic younger brother without hoping someone would just Kamehameha your ass already. Of course, if you’ve legally changed your name to Goku and plan to name your firstborn Gohan, you’ll be in fanboy heaven from the moment you see the show’s intro via the game’s incredibly cool 3D engine. You can tell that the developers themselves are DBZ fans. From the attention to detail in rendering Akira Toriyama’s character designs (including fan-favorite, the oddball Hercule, in his own Survival mode), to the long, episodic-style Story mode and its alternate paths, Budokai stands above any of the previous attempts to turn the series into a fighter. And it’s not just good when playing solo. Customizing your attack repertoire by buying, trading, and earning skills gives the multiplayer Duel mode more replay value than most fighters could hope for. You can even collect the seven Dragon Balls to earn more ultrapowerful, rare skills. As if it wasn’t already obvious, DBZ fans, this is your game.

I feel bad for Dragon Ball Z fans. For so long, if they wanted to play a good fighting game based on their favorite manga/anime, they had to fool themselves into thinking the PS1’s Dragon Ball GT Final Bout wasn’t a steaming pile of dung. Lucky for them, Budokai is actually pretty good. As far as gameplay goes, it doesn’t have the depth or technique of, say, Dreamcast’s Soul Calibur, but the ability to upgrade your fighters with earned moves adds a bit of strategy to this game. Between the terrific cinemas, TV voice actors, and perfectly re-created story lines, you’ll really feel like you’re playing the show. And isn’t that what you’ve wanted all along?

Let the Kamehameha rejoicing commence. DBZ fans will devour this surprisingly solid fighting game. Personally, I’m not entranced by the insanely long cinemas of spiky-haired dudes questing to bring one another back to life, but for fans of the show, the episodic Story mode does the cartoon justice. This mode’s difficulty is a bit uneven, though. The default Easy is a total cakewalk, but bumping it up to Normal makes the game surprisingly tough. Overall, DBZ fans will adore the game, and even gamers who don’t dig the source material will have fun. Budokai offers oodles of unlockable characters and moves, and the fighting engine boasts unexpected depth. 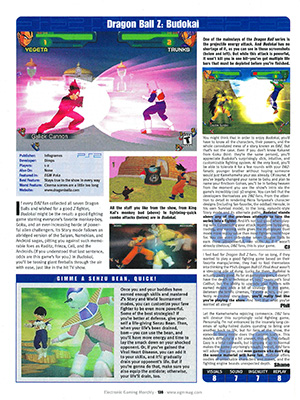