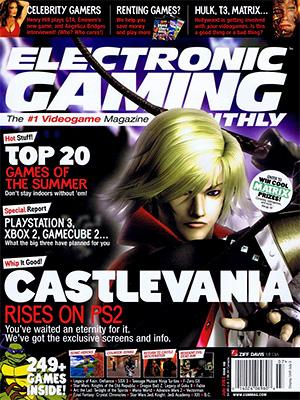 More of the same, if you know what I’m Saiyan

■ PHOTO:
Gohan hones his martial arts skills against a dastardly band of wild bears and snakes.

■ PHOTO:
(Left) Saddened by our mediocre reviews of his new adventure, Goku jumps off a cliff

■ Good:
Play as five of the most popular DBZ characters

■ Bad:
Too much random wandering and boring fighting

Like its predecessor, Legacy of Goku II has a lot going for it–impressive visuals, a decent soundtrack, and boatloads of beloved DB characters that will no doubt endear it to the Z hardcore. But underneath the surface, it suffers from a few annoying problems. For starters, while this is a longer quest than the original Legacy, its length is mostly due to having to level up via lots of repetitive, random battles. Would a Saiyan warrior like Piccolo really spend half an hour killing woodland creatures to gain experience? I don’t think so. And the combat stinks–attacks often look like they’re striking the air, yet they still somehow manage to connect. Bah! Padding out the gameplay even further is a boatload of fetch quests, like the unbelievably complicated task of getting Gohan past a crowd of people, which involves finding a sandwich, a newspaper, an antique record, and a crashed school bus in order to start a parade. Hey, wait…couldn’t Gohan just, ya know, fly over? Unless you’re a huge DBZ fan already, you’ll probably want to skip this Legacy.

Why are Super Saiyans running endless errands for every schmuck they encounter? Every minute squandered fetching autographs and snack food is time I couldn’t spent saving the world. And if I really do possess the power to annihilate whole planets, why couldn’t I keep a few stray dogs at bay? Seriously, for most of the game, if I wasn’t being someone’s bitch, I was running scared from pissant critters. The overarching plot is fittingly epic and the graphics are fine, but plebian puzzles and problem-fraught combat guarantee frustration in this humdrum quest.

Despite its numerous flaws and ridiculously short length, I somehow managed not to utterly despite the first Legacy game. This sequel is definitely better, yet it still suffers from many of the same fundamental problems. Most notably, the shoddy hit detection makes fighting enemies highly frustrating. On the good side, the graphics and sound are very solid, and the controls much better. As a DBZ RPG it suffices, but doesn’t particularly impress. 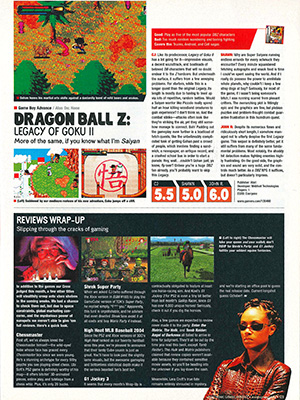