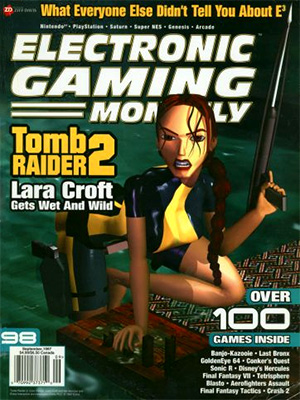 You probably have heard of it, even though the games are all in Japanese. You probably have seen it; almost every month you can see examples of it in the envelope art section of EGM. What is it? Dragon Ball. This international phenomenon started off as a Japanese manga and has evolved into over 450 TV show episodes (across three series), countless Dragon Ball toys and action figures, and now, an 11th video game.

Despite their legendary cult-hit status, Dragon Ball video games have always eluded the American audience, until now.1 Dragon Ball GT, soon to be completed in Japan, is going to be the first-ever game of the series to be officially released in the U.S. The gaming community asked and asked, and now they shall receive.

The gameplay can be considered a cross between a typical 2-D fighter like Street Fighter and Psychic Force, Acclaim’s 3-D fighting game. Although the Dragon Ball GT combatants are polygon rendered, all of the battles take place on a two-dimensional plane. Each fighter has a Punch, Kick, Block and Beam button. Performing Street Fighter, or Mortal Kombat-style moves will execute one of several attacks and/or combos.

But a few things separate DBGT from the masses. First, each character can fly almost anywhere he/she wants on the map. This leads to some interesting fighting strategies when your opponent can move anywhere around you. Second, all DB fighters have a super move that can be blocked or countered. If someone attempts to counter a super with another super, then the two powers will lock up, and an ensuing tug-of-war battle (which you win by tapping the Beam button as fast as possible) will determine whose super gets through, and of course, who gets hurt.

This new fighting style is like nothing you’ve seen before. It will be interesting to see how the American audience accepts Dragon Ball GT. Players in love with Street Fighter or Tekken might hold it in disdain, but the Dragon Ball fans will welcome it. Dragon Ball GT is almost a guaranteed winner, sales-wise. Hopefully, this will mean more Dragon Ball games in the future for us.

The Dragon Ball anime tells the story of your young hero Goku and went for over 100 episodes in Japan. The few that were shown in the United States during 1995 really didn’t make an impression ratings-wise. Dragon Ball Z, however, is a new story both figuratively and literally. This series tells the tales of an adult Goku. Over 300 episodes airing in Japan, and they are now being broadcast in the U.S. by Saban Entertainment of Power Rangers fame. If you haven’t heard of Dragon Ball Z before, you will soon, as this weekly cartoon series is seriously taking off. In fact Dragon Ball Z has had higher sweeps ratings than Friends or X-Files in certain parts of the country despite its non-primetime slot. Currently the series has moved on to Dragon Ball GT in Japan. Cindy Fukunaga, half owner of the broad licensing rights to Dragon Ball Z, told us that in all likelihood, Dragon Ball GT will eventually be shown here in the U.S. (but it won’t be for a while, since they have plenty Dragon Ball Z episodes to show yet). 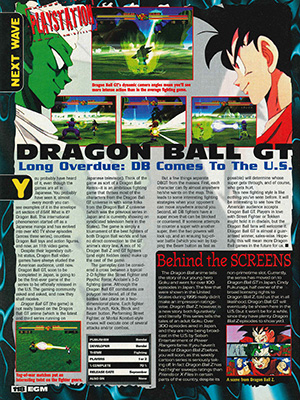 The following historical notes are included for the benefit of the reader as supplemental information and were not originally published in the book.
1 We technically received the first Dragon Ball game on the Nintendo Famicom, The Legend of Shenlong, as an edited Dragon Power on the NES in 1986.
Transcription & Notes: VegettoEX
« Previous Page
Press Archive