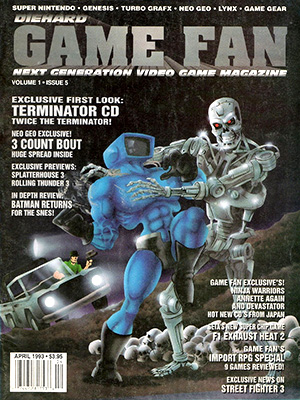 Dragon Ball Z is based on the popular Japanese comic and cartoon series. There are 7 balls spread throughout the world. Obtain all 7 and the white dragon will appear and make your wishes come true. Our main character “Son Goku” and his friends are in a race against time to find these balls and keep them out of the hands of the evil freezers [sic], who plan to use their powers to control the entire universe. What sets DBZ apart from other RPG’s is the “card battle system”, Where, [sic] instead of buying weapons and armour with money, you receive 5 cards before each battle displaying 2 sets of numbers and one big letter in the center. To do more damage in battle the attack number on your card must be higher than your enemies (the defense mechanism works the same way). The center letters represent martial arts styles used in battle. The animated battles in DBZ are spectacular, it’s like watching a cartoon! This is an RPG experience DBZ fans must have, but even if you’ve never seen DBZ, it’s still an interesting game due to the unique fighting scenes and the ability to fly around the map. If you’re a pro at import RPG’s it’s worth a look, but for novice RPG players, it may be a bit too complex… Hope for a US. [sic] release. 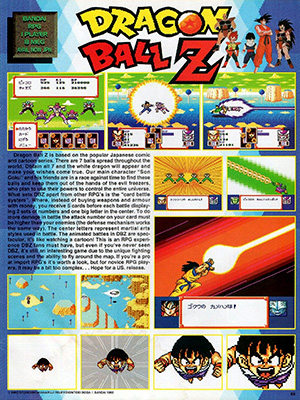