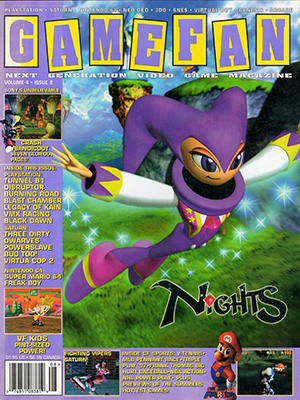 The ever-popular Dragon Ball Z series has finally made it to 32-bit! Yeah, yeah. I know Ultimate Battle 22 was released a while ago, but it was so bad I don’t consider it to be part of the series. I know what all you non-Dragon Ball fans are thinking… just why is the DB series so popular? One has to but watch a single hyper-kinetic, ultra-destructive, insane, hundred-mile-an-hour battle from the series to be hooked for life. Unfortunately, no DB game yet has recreated the fury of the average Dragon Ball battle… until now. Furthermore, nearly all of the characters from the series have made it into the game, hence the name Dragon Ball Z “Legends.”

There are two game modes: story and versus. In the story mode you’ll fight rivals like Vegeta, Freeza, Cell, Majin Boo… the list goes on and on. In versus mode you’ll only have four characters to choose from, but as you progress in story mode, all of the defeated enemies will be playable ala Guardian Heroes.

During the battles, there’s a power balance meter that determines who has the initiative to whip out an all-destroying special attack. From Goku’s Super Kamehameha to Gotenks’ Super Kamikaze Ghost Attack [sic], it’s a real rush to watch the DBZ characters annihilate each other into oblivion.

At first, the play mechanics are a bit hard to get used to. However, if you’re a hard-core DBZ fanatic such as I, your determination will become most useful at figuring them out. Once you get the hang of how to link the rush combos, everything else should be a piece of cake.

As you can see, the graphics are phenomenal, with beautiful light-sourcing and transparency effects on the PlayStation, and a higher-resolution ground texture on the Saturn. The music gets a tad repetitive, but hey… the anime recycled the same tunes for about 8 years, so go figure.

In closing I must say that this game should not be missed by any DBZ fan, nor even the slight enthusiast. 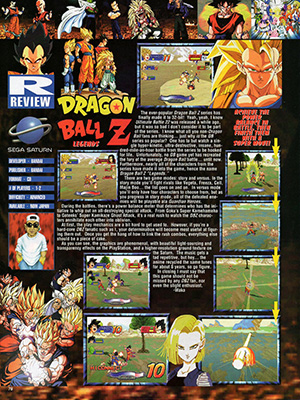