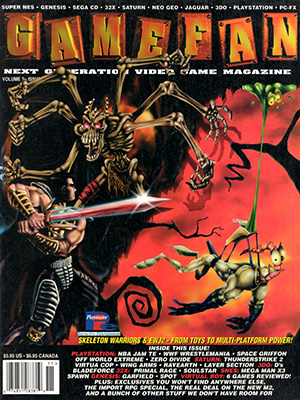 The Dragonball Z series of “Super Butoden” fighting games on the SNES has been fair to middling at best, with the second edition easily the leader of the pack. Though they were not the greatest fighters, I loved them ’cause I’m a Dragonball FREAK. Happily, Bandai has updated the game engine given the animation and backgrounds a serious overhaul for the PlayStation incarnation of the Super Butoden series, Ultimate Battle 22.

The “22” in the title refers to the amount of selectable characters. This would be a scant four characters short of the fighting game with the most players so far, KOF ’95, if not for the code (see below) that upgrades Ultimate Battle 22 to Ultimate Battle 27, effectively making DBZ the most-populated fighter ever. Luckily, many of the characters have exactly the same moves… mainly because several of them are actually the same person. There are four incarnations of the main character, Songoku, alone – young Goku, Super Goku, Super Saiyan 3 Goku, and the character featured in the latest DBZ theatrical release, “Gekitotsu no Fusion,” [sic] Gogeta.

Most fighters’ attacks are done with identical motions – probably to cater to young children. The actual game system is somewhat changed from the 16-bit versions – the game no longer goes split screen – it just scales WAY out. If you haven’t already noticed, all the backgrounds in the game are in total 3-D. Some are extremely boring, while other [sic] are quite impressive – Trunks’ ruined city, or the Tenkaichi Budokai backdrop, for instance. The actual fighting is based around a punch button, a kick button, a fireball button (no kidding!) and the L and R dash buttons. To play effectively, you simply have to release your massive special attacks, block or reserve the enemies’, run away and charge your power back up, then repeat. Though obviously not the greatest fighting system, it does fit the DBZ storyline, in which most battles are fought with massive bursts of planet-shattering energy and hand-to-hand combat so fast it can’t even be seen. Each character does have close-up SFII-style moves, but you honestly hardly ever use them.

The graphics are fairly good… but, as I’ve said before, many of the backgrounds are SERIOUSLY lacking in visual power. Though they never pixelize or break up, they’re just so BORING. Why waste your powerful polygonal background engine on a field of grass or cliff scene? The best part of DBZ’s visuals is the character animation–all of it was done by actual animators from the TV show’s staff. It’s about 150% smoother than the 16-bit versions, but still not up to par with the latest Capcom and SNK fighters… but then, what is? The before- and after-game cinemas, also done by TV animators, are entirely voiced by the actual actors from the DBZ TV series, as are the in-game wails and special moves. While on the subject of sound, let me briefly mention the BGM… it is depressingly run-of-the-mill, non-descript fighting game music, with a couple of somewhat-memorable tracks but nothing at all exciting.

Unfortunately, I would recommend Dragon Ball Z: Ultimate Battle 22 only to Dragonball fans… there are no particularly exciting technical leads to be found here and the game itself is almost painfully average. After recently experiencing the despair of the 10-year-old Dragonball series concluding, must the point be rammed home with this slipshod offering? I can only hope the Saturn version will be better.

(SIDEBAR) Play as the hidden characters in Ultimate Battle 22!

To play as young Songoku, Kame Sennin, Mr.Satan and Super Saiyan 3 Songoku and Vegeta, enter the following code at the title screen on pad one: Up, Triangle, Down, X, Left, L1, Right, R1. You’ll hear a tone, and the game will load intro FMV for each new fighter. The title screen will now change to read “Dragon Ball Z: Ultimate Battle 27!” 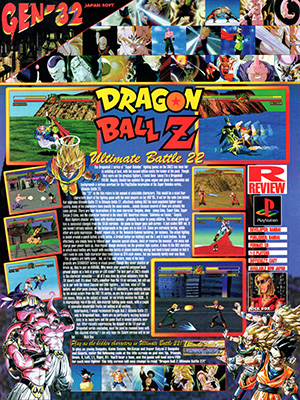