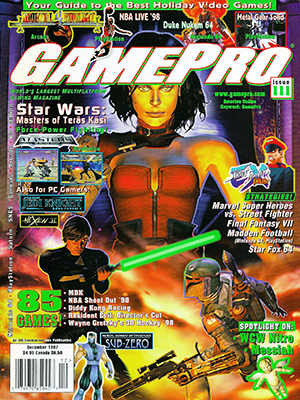 Dragon Ball Z is without a doubt one of the most popular anime series ever. But as far as U.S. consumers are concerned, Dragon Ball is still a niche market, and anime fans/video gamers were the only ones looking forward to this title. They should not stop looking.

To some extent, Dragon Ball GT suffers from the same problem that plagued Bushido Blade–trying to customize a very eclectic fighting game for the fight-hungry U.S. market. But Dragon Ball is no Tekken 2: You have to build up fighters, you’re allowed immediate access to life-bar-draining Meteo moves (one of the cheapest, longest-lasting special moves in fighting history), and the fights take place in the air and on the ground. Beyond that, the game doesn’t offer much to fighting-game freaks.

The graphics are polygon-heavy, with some breakup in the fighters. The backgrounds are as bland and sparse as can be, and the super moves are little more than huge fireballs. Even the Meteo moves are simply multiple-hit moves that you perform with two-button presses.

The sound, which is straight from the TV series, is lame and childish. Even the taunts sound ridiculous, and there’s a definite lack of sparkle in the music and other sound effects.

■ Protip
Almost everyone has a projectile. Use them while in the air, and they’ll target an opponent on the ground.

■ Protip
Against this impossible boss, try to fly and attack its upper torso first.

■ Protip
Some characters crouch after the first shot, like Majin Boo. Use this defensive maneuver to gear up for a Meteo attack. 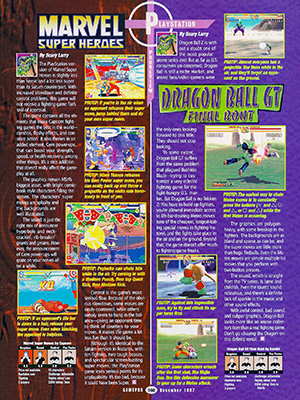