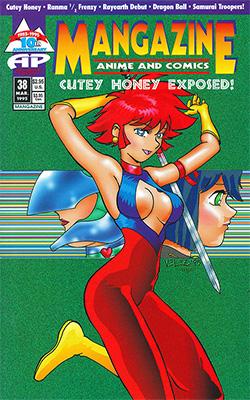 At last report, the U.S. license for Dragon Ball was held by Nippon Shuppan Hanbai (Japan Publishing & Sales), the corporation that is perhaps better known to anime fans for its bookselling division, Books Nippan, and its anime distribution division, U.S. Renditions. That has since changed. The license is now in the hands of FUNimation Productions, Inc., a company based in Fort Worth, Texas, which plans to have the show on the air as a weekly series, syndicated through SeaGull Entertainment, by this fall.

As some of you readers may know, Dragon Ball is Akira Toriyama‘s immensely popular and incredibly long-lived take on Journey to the West, the Chinese legend of Son Gokû the Monkey King. The basis of the early series, which appears to be what FUNimation will be adapting, are the adventures of a young boy named Son Gokû, who is apparently the grandson of the original Monkey King.1 (Actually, he’s an alien, but we don’t discover that until much later.) Gokû gets caught up in the recurring quest by various parties (both good and evil) for the seven Dragon Balls, seven orbs that can summon the dragon god Suen-Long when brought together. The dragon will grant any one wish to the first person to voice one, then disappear, returning to its slumber. The balls then scatter across the land, and the search begins anew.

Toriyama approached the legend with a no-holds-barred sense of wild humor aimed primarily at grade-school boys. However, his brand of insanity appealed to people well outside the target audience, perpetuating the manga and the TV series far beyond the lifespans of most of the competition. A few early Dragon Ball episodes and a combination of two episode-compiler movies were dubbed by Harmony Gold and shown in certain areas of the country a few years ago, but nothing else ever came of that project. The series has already proven to be a top-rated children’s animated series in France, Spain and Hong Kong, as well as Japan, and now FUNimation plans to let the whole United States in on the full Dragon Ball phenomenon.

Although only in existence since last year, the principal members of the company–Gen Fukunaga, Cindy Brennan Fukunaga and Daniel Cocanougher–have been involved in the broadcasting industry at various times over the past thirty years, through ownership of a string of television and radio stations throughout the United States. As with the original Dragon Ball, the U.S. version will be marketed as a mainstream property aimed at the 4-11 age group. FUNimation promises that it will be careful to maintain Toriyama’s storyline, but naturally it will need to censor some aspects of the show for the U.S. market.

Among the currently listed staff are writing team head Cliff MacGillifray, Story Editor and lead writer for Mutant League; director Michael Donovan, who has directed over 300 episodes of various series and most recently played the lead role in Conan; and music creators Griffiths, Gibson and Ramsey, whose most recent project was doing all the music for ABC’s Reboot. Post-production coordination is being done by BLT Productions, who have also showcased their talents on Reboot, while final mixing is in the hands of Dick and Roger’s Sound Studio, whose credits include Platoon and (once again) Reboot. Computer-generated technology will doubtless be the order of the day. Leading a cast that has a combined experience of 6,000 episodes (Take that to mean what you will.) is Gary Chalk, known for his work as He-Man on the most recent version of that show.

The master merchandising license for the show has gone, of course, to Bandai America. The company will be introducing action figures, trading cards, and a Super Nintendo video game2 in their initial wave of products. However, other companies have been quick to want in on the project. According to Gen Fukunaga, “We are enthused about the many unsolicited calls we are receiving to license Dragon Ball merchandise. So many companies are familiar with the property due to its overseas success, and they are anxious to be a part of the U.S. launch.” 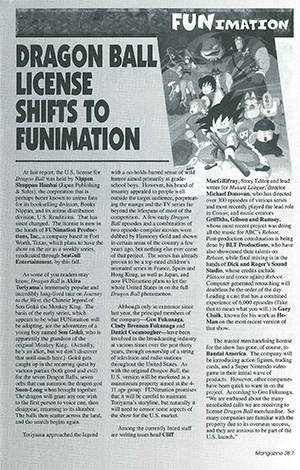 The following historical notes are included for the benefit of the reader as supplemental information and were not originally published in the book.
1 This is really the only piece of inaccurate information in the article. Totally unrelated, but perhaps slightly related: the character SonSon in Marvel vs. Capcom 2 is the granddaughter of the character of the same name from Capcom’s own 1984 arcade game.
2 An article in the March 1998 issue of Animerica seems to be the only other reference to Bandai’s plans for a Super Nintendo game release in America.
Transcription & Notes: VegettoEX
« Previous Page
Press Archive