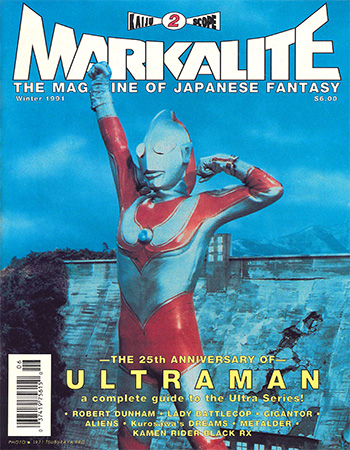 Lately, a lot of Japanese animation has been dubbed into English. This is a trend that I’m sure most Japanime fans, like me, welcome. Nevertheless, with the exception of a few standouts like AKIRA or MEGAZONE 23 II, something always seems to get lost in the translation. And thus, for the chance to better understand a particular film or show, we must put up with lame and inadequate translation an[sic]/or lousy voice acting. Happily, I can tell you of one feature that made the transition to English rather nicely.

DRAGONBALL is a compact and very well put together story about the quest for seven magic Dragonballs. From the film’s prologue, we learn that by gathering all seven of these balls, the finder is granted one wish by the Dragon God. Once done, the seven balls are again scattered, until another brave soul is able to find them all.

The very likeable hero of this adventure is Zero1 (aka Goku, or “Monkey”), a strange little boy-like character sporting a long, skinny tail. He is as brave to face the world outside of his own valley as he is naive about it. Zero’s most cherished possession is a single magic Dragonball, a gift from his late grandfather. Of course, there are others who want this treasure as well. It is through his “accidental” meeting with Lena2, an attractive and perky freelancer out to snag Zero’s Dragonball, that he learns about its true nature and the existence of six others.

Until Zero met Lena, he was at peace and blissfully unaware of things not affecting him. But that was to change soon. All was not well in the valley of King Gurumi3, a grotesque Jabba the Hut-like creature, who was already out searching for the magic balls, so that he may get his one wish–to eliminate his all-consuming hunger. Through his henchmen, King Gurumi recovers all of the Dragonballs, including Zero’s. Naturally, Zero can’t let the King get away with this, so with the aid of the weirdest assortment of allies, Zero goes head to head against King Gurumi and his men.

In a truly wild climax, the ever-hungry king mutates into a hideously fat salamander creature and chows down on all of the Dragonballs. He meets his end with the last bite, but in the process calls forth the legendary Dragon God. Zero’s group’s request for peace in the valley is granted, and the seven magic Dragonballs are scattered, hiding and waiting until Zero and his friends can find them all once again (but that’s another story).

I found the English-language DRAGONBALL movie to be fun and extremely enjoyable. All the great visual sight-gags remained intact. But what made the an [sic] impression was the sharp, witty dialogue and the “character” allowed the supporting players–in fact, some of the more clever dialogue comes from these, including Mao-Mao4, a little pig dressed in a Chinese military uniform who has the ability to transform into other animals. There’s also master Roshi5, a wise old hermit who likes to wear Raybans and aloha shirts. He gives Zero his Flying Nimbus6, a cloud that allows Zero to zip along the skyways. For anti-macho ninja-lovers, there’s Sadaki7, a ninja-thief for hire, who becomes paralyzed with fear everytime he’s near an attractive woman.

Harmony Gold deserves credit for putting this little gem together. Though I’m sure it’s no easy thing, it may be easier to translate an action-adventure film because the stress must be on the visuals. But DRAGONBALL, which also concentrates on characterization and humor, must have been a more difficult job. The task becomes even more perplexing when you take in account that it’s Japanese humor that needs to be successfully translated into humor that we Americans can understand and appreciate. Fortunately for us, Harmony Gold manages to pull it off beautifully.

Try to catch this one if you can–it’ll be worth it! 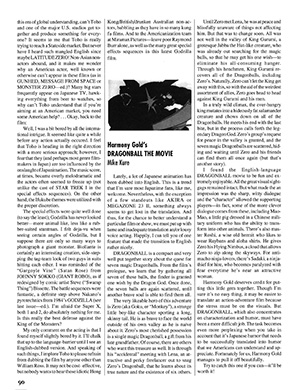