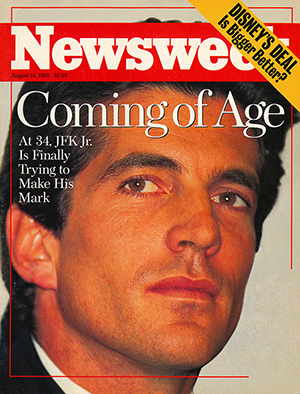 Hushidor Mortezaie is bored with being human. He’s ready to mutate. He’s got a tattoo on his leg of a battery pack and a bar code stamped MADE IN JAPAN. He’s had a nose job, some lipo. His close-cropped hair changes color like a mood ring. Even among the freaky salesclerks he works with at Patricia Field–a store servicing the fashion fetishes of New York’s downtown club scene–Hushi sticks out. In his Japanese clogs and plaid Bermudas, he doesn’t just look like a cartoon. He wants to be one. Not just any cartoon: a Japanese cartoon like Speed Racer or Astro Boy! He’s getting contact lenses that’ll simulate little ‘toon twinkles in the corner of his eyes. “That black sparkle,” Hushi says. “To me, it’s the ultimate in being a posthuman android.”

OK, so maybe this kid’s not your typical 23-year-old. But he is typical of something: the Japanimation invasion. Imported by cultists since the ’60s, Japanese animation, or “anime,” is infiltrating the mainstream. Michael Jackson’s “Scream” video lifts images from the anime (pronounced ANNI-may) classic “Akira.” Next month, two Japanese children’s shows, “Sailor Moon” and “Dragon Ball,” will hit Saturday-morning TV here and could ignite the next big merchandising frenzy this Christmas. Anime videos sold in the $75 million range last year. They’ve become an emblem of cool, with club kids like Hushi obsessing over anime-inspired attire. And this week, MTV debuts “Aeon Flux,” an anime-influenced sci-fi serial about a fatal femme with a killer bod and matching attitude.

Ms. Flux wasn’t born bad; she’s just drawn that way. Minimally clad in black leather, this dominatrix warrior’s harsh beauty nicely complements the cruel wasteland she calls home. “Aeon” was created by Korean-American Peter Chung, but most of the animation is done in Japan. It’s typical of the adult-oriented anime that’s grabbed American fans: postapocalyptic, violent, intensely sexual. “Japan’s animated futuristic fantasies carry on a mad love affair with the threats–and possibilities–of technology,” observed a recent article in Wired magazine, the techno-bible. Anime may be finally taking off here because America is finally catching up to Japan’s postindustrical society. We’ve consumed their cars and camcorders for years. We love their hardware; now we’re ready for the pop-cultural software that goes with it. What they’re sending us is a weird hybrid of “Blade Runner,” H. P. Lovecraft and Godzilla, only with characters that look like extras from “The Archies.” Little pug noses. Big round Western eyes with that posthuman sparkle.

Stalking monster: MTV saw the anime monster stalking America a year ago. “Aeon Flux” was getting heavy response as part of MTV’s “Liquid Television,” the animation grab bag that spawned “Beavis and Butt-head.” And “Speed Racer” had become the network’s late-night staple. First shown in this country in 1967, this mind-numbing repetitive Japanese cartoon about a boy and his car is a nostalgia fix for Gen-X viewers and a brand-new trip for Generation Y. Some of the younger kids might also have watched “Robotech,” a Japanese-based series about F-14 fighters that transformed into robots and set off the “transformer” toy mania of the mid-’80s. But for the most part Japanimation remained until recently a cult phenom. The Japanese have a word for these anime addicts: otaku, meaning “obsessive geek.” Their American counterparts traded bootlegs, communed at conventions and on the Internet. In 1988 they started reading a Marvel comic called “Akira,” adapted from a Japanese manga, or comic book. The movie version was released in the United States the following year and became an art-house sensation.

“Akira” was “like nothing people had seen before,” says Carl Horn, an editor at Animerica magazine. Set after World War III, “Akira” thrusts a juvenile-delinquent biker into a government experiment that gives him apocalyptic powers–and an overwhelming desire to blow up Tokyo. Director Katsuhiro Otomo painted his bleak vision of the future with virtuoso artwork and awesome special effects. “I think American fans who latched onto this stuff are entranced by the fact that in the animation medium, anything is possible,” says Matt Greenfield, vice president of AD Vision, a Houston-based anime distributor. “Japanese writers and directors will push that medium to the edge.” And past it.

‘Japornimation’: Take, for instance, a repellent piece of NC-17 “Japornimation” titled “Urotsukidoji: Legend of the Overfiend.” This nonstop murder-and-rape fantasy belongs to a subgenre of anime known, for reasons too disgusting to describe, as “naughty tentacles.” Disdained in Japan, they’re hot sellers here. At Anime Crash, a Manhattan video/clothing/toy emporium that opened in March, letter carrier Frank Koch, 36, spends $300 a month on these hard-core cartoons: “You can only take so much of Disney’s cute, fuzzy animals,” he explains. “This is about death, sex, love and war.” The NOT FOR KIDS warning labels are guaranteed to make kids even more curious.

In Japan, anime does enormous business. Unequipped to compete with Hollywood’s live-action product, the Japanese turned animation into a megaindustry that churns out 30 to 40 films and TV programs a week. Pioneered by the late Osamu Tezuka–the so-called “God Emperor” of anime, whose “Kimba, the White Lion” series may have been plagiarized by Disney’s “The Lion King”–Japanimation encompasses everything from sophisticated soap operas to ecoconscious racoons. “There’s more to it than just babes with big boobs and a raygun jumping around in outer space blasting bug-eyed monsters,” says Carl Macek, who introduced “Robotech” and “Akira” to the United States. “For every one of those B-movie girlie films there’s a film like ‘Barefoot Gen,’ which deals with the aftermath of Hiroshima.” The smart supergirl star of “Sailor Moon,” far from being a sex kitten, is an empowering heroine to her schoolgirl fans. She also moves $250 million a year in tie-in toys in Japan–five times the sales for the once mighty Power Rangers. “The bottom line is merchandising,” says Macek. “When Japanese animation hits big is when it becomes a premium in a Happy Meal at McDonald’s.” Will that be to stay or to go? 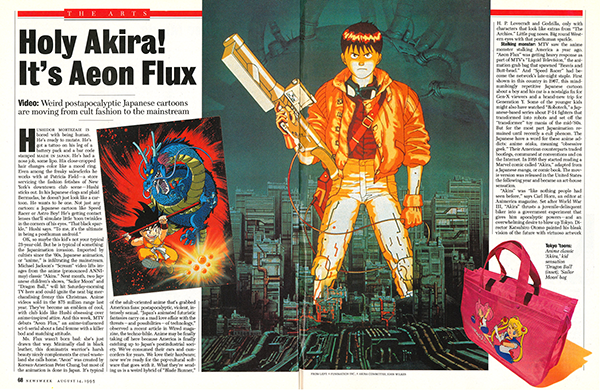