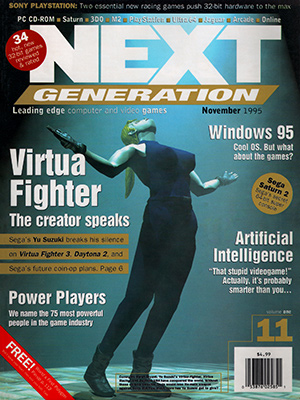 Based on a popular Japanese animation series, Dragon Ball Z made its debut on the 16-bit systems1 and was hugely successful with those fans familiar with the series. What this 2D fighter has going for it beyond name recognition, however, is not easy to identify.

Boasting nothing by way of real innovation, Dragon Ball Z is an instant disappointment to those looking for something new and exciting from the PlayStation. The gameplay is at very best average and the graphics are sub-standard compared to other fighters like Mortal Kombat. About the only thing this one has going for it is the vast selection of characters.

[caption] The characters is Bandai’s new PlayStation title, Dragon Ball Z, may be familiar to game fans in Japan, but in the US they carry very little weight 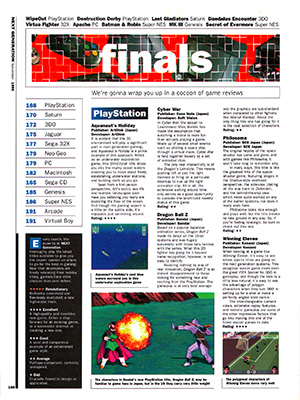 The following translator notes are included for the benefit of the reader as supplemental information.
1 The Dragon Ball Z brand actually made its debut on the 8-bit Nintendo Famicom with Dragon Ball Z: Assault! The Saiyans in 1990 and Dragon Ball Z II: The Violent God, Freeza!! in 1991 before appearing on the 16-bit Nintendo Super Famicom in 1992
Transcription & Notes: VegettoEX
« Previous Page
Press Archive