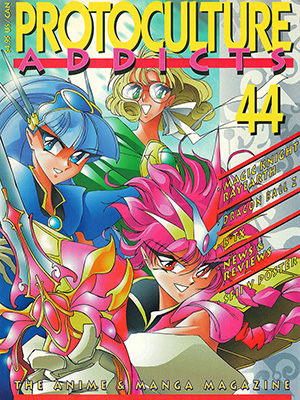 The Saga Continues… Never has there been a dark force so strong and so powerful as the Saiyans. With nothing to conquer on their own planet, the mighty Saiyan’s [sic] sweep across the universe leaving a path of destruction… and now they’ve come to Earth!

DRAGON BALL Z is the story of Goku, his son Gohan and a handful of friends who battle for the Earth and all that’s good against the deadly forces of the most incredible warrior race of all time and space. Warriors so incredible that they only have to send one of their kind to destroy entire planets.

The story unfolds as Raditz, a Saiyan who reveals that he is Goku’s older brother, arrives and interrupts the great peace. The ensuing battle moves mountains, uproots rivers and even changes the Earth’s weather patterns. Raditz reveals that a force of even more powerful Saiyans are coming to Earth.

So now, friends, allies and former enemies must band together to prepare for the invasion. Their best hope rests in their quest to gather the Dragon Balls and wish Goku, the only one even remotely powerful enough to stand against the mighty Saiyans, back to life… if they have enough time. That’s all that’s standing between the Saiyans and the Earth’s total destruction.

DRAGON BALL Z, the international hit animated series, made its U.S. debut Fall 1996. With more than 500 episodes in the overall series which has posted top ratings in both Europe and Asia and over $2.95 billion in related merchandising worldwide, DRAGON BALL Z is ready to explode onto the U.S. market with 26 half-hours filled with all the action and mystery that has captivated audiences the world over. Produced by FUNimation Productions Inc. and syndicated by Saban Domestic Distribution, the series has already cleared stations representing more than 86% of the country.

This epic saga has topped the Japanese ratings charts for more than ten years, consistently remaining the number one children’s show there. In France, the show has dominated the competition as well, and for three years the show was “number one… maintaining a 65% rating since premiering,” according to Nikkei Trendy. The trend continues into Spain as well, where Sofres reported that the show recorded an “average market share topping 75%.”

DRAGON BALL Z have [sic] made $140 million in merchandising in 1994 in Japan alone. What accounts for the amazing success of the television series and merchandising of DRAGON BALL Z is a combination of items including the incredible richness of the story line and the depth and endearing personalities of the vividly portrayed characters. And all that was created by the genius of Akira Toriyama.

Akira Toriyama is often referred to as the successor of Osamu Tezuka who is credited with popularizing manga in Japan. Not only [sic] DRAGON BALL manga has sold over 109 million copies (as of July ’95), but Toriyama’s work appeals to children of all cultures as evidenced by his international success. He broke new ground with DRAGON BALL’s “edgy” drawings and unique battle movement. But Toriyama’s abilities go beyond his pen: he is particularly known for his ability to create strong stories which embody the values of hope for the future, friendship, strength and effort.1 Human nature is the essence of the world of Akira Toriyama.

DRAGON BALL Z has been selected by TV GUIDE as one of its top ten best new shows for kids in its October 26th Parent’s Issue. As TV GUIDE reports, “Japanese animation (anime, to the initiated) is rapidly becoming a full-fledged fad here, and Japan’s top children’s show is riding that wave into the US syndication. An Action epic, DRAGON BALL Z (Check TV GUIDE listings) turns the Superman myth upside down: Its hero, Goku, also came to Earth as an infant with powers far beyond those of mortal men — but he was sent to destroy the planet, not defend it. Fortunately, a wise martial-arts master (along with a bonk on the head) turned him away from evil toward family values…”

For more about DRAGON BALL, look for PROTOCULTURE ADDICTS #23 and 37, and for PA’s web page special feature on http://www.odyssee.net/~flip/PA/PA44TOC.html 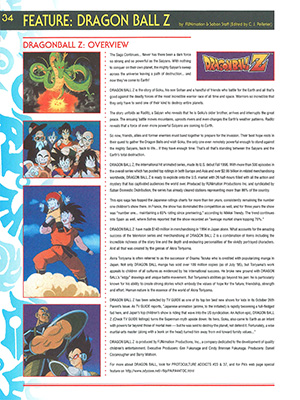 The following historical notes are included for the benefit of the reader as supplemental information and were not originally published in the book.
1 “Friendship, Effort, and Victory” are the three items that make up the motto of Shōnen Jump in Japan
Transcription & Notes: VegettoEX
« Previous Page
Press Archive