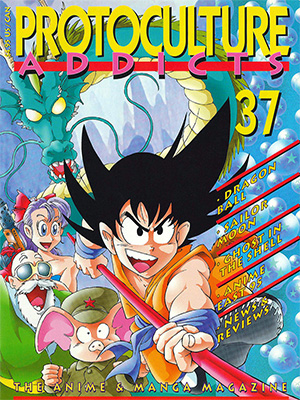 DRAGON BALL is the number one rated television show in the world, with significant international appeal across as multitude of cultures. It has spawned an incredible 500 episodes and 11 specials.

DRAGON BALL has generated billions of dollars in world-wide merchandising revenues. Bandai, the crucial driver in that success, is fully backing this property worldwide.

DRAGON BALL is the greatest creation of Akira Toriyama, Japan’s most famous and popular animation artist. His printed works have a circulation of over 130 million copies and his television works have dominated Japanese television.

DRAGON BALL is the flagship product of Toei Animation, the “Disney of the Orient,” which has produced 131 full-length animated features, 107 animated series for television (6150 episodes), 30 television specials and countless videos over the last 38 years.

DRAGON BALL is a “Mystical Action Adventure” series of riveting stories, driven by extraordinary characters and filled with terrific moments that reveal the wonderful charm, humor and weaknesses of the warriors, adventurers, wise sages and villains that make up its cast.

■ The Genius of Akira Toriyama

Akira Toriyama is often referred to as the successor to Osamu Tezuka (ASTRO BOY, KIMBA THE WHITE LION) who is often credited with popularizing manga (comic books) in Japan and the one artist that best represents the world of manga. Akira followed his great success DR. SLUMP, which sold 28,110,000 copies and spawned a 400-episode animated series which was rated number one in Japan, with an even greater phenomenon — DRAGON BALL — which has sold over 109,300,000 copies (as of 7/95)!!

Akira’s work appeals to children of all cultures, as evidenced by his international success, and to all forms of media, as evidenced by his success in print, television, film video games, and merchandising. Akira broke new ground with DRAGON BALL. With its “edgy” drawings, unique battle movements and vivid characters, DRAGON BALL is his greatest work. But Akira’s abilities go beyond his pen — he is particularly known for his ability to create strong stories which embody the values of hope for the future, friendship strength and effort.1 Human nature is the essence of the world of Akira Toriyama.

DRAGON BALL has not only spawned over 500 episodes of animated shows, but has created a merchandising frenzy with sales of $2.95 billion in DRAGON BALL-related merchandise.

Akira Toriyama has reached a status few artists can hope for. An Akira Toriyama exhibition has recently toured nine public art galleries and other venues, drawing over 3.3 million people. This is the second time in history that a Manga artist has achieved this level of notoriety (the first being Osamu Tezuka and the exhibit was after his death). The National Museum of Western Art in Tokyo has made an unprecedented move by exhibiting a manga artist’s work. The works of Akira Toriyama can be seen displayed with those of artists such as Monet and Miro.

DRAGON BALL is a continuing mystical adventure series whose wonders unfold with every episode. The unique blind of charm, humor, and action is played out in an intensifying saga that builds through the following 26 episodes.

FUNimation Productions is a new company whose principals have owned and operated a string of television and radio stations throughout the southern United States over the last three decades. Dedicated to developing quality children’s entertainment, Dragon Ball is FUNimation’s initial entry into the television marketplace, with several more shows in development for 1996.

From the beginning, FUNimation’s founders — Daniel Cocanougher, Gen Fukunaga and Cindy Fukunaga — have focused on developing creative partnerships with leading individuals in the children’s entertainment industry.

For Dragon Ball, FUNimation called upon a writing team headed by Cliff MacGillivray, the story editor and lead writer for MUTANT LEAGUE, currently the number one weekend animated show.

Michael Donovan, who is best known as the lead voice in CONAN, brought his skills and experience in directing over 300 episodes, to the show.

A terrific and talented cast, headed by Gary Chalk, known for his work as HE-MAN, provided the voices for the show. Combined, the actors have over 6000 episodes worth of experience.

New music was created by Griffiths, Gibson and Ramsey, who have received more than 500 awards for creative excellence over the last 25 years and most recently have created all the music for ABC’s REBOOT.

BLT Productions, whose work on ABC’s REBOOT has been critically acclaimed, coordinated the post-production.

Dick and Roger’s Sound Studio, whose credits include PLATOON and ABC’s REBOOT, performed the final mix.

A. The Animated Series
DRAGON BALL, the series, has over 500 complete episodes that are available for the US syndication market. The cartoon has had remarkable success in Japan, France, Spain, and Hong Kong for many  years, and is now doing fantastic in South America.

C. 1996-7 Broadcast Season
At this time, FUNimation is planning to distribute additional new episodes for the 1996-7 broadcast season.

“Deep within the Earth’s core a fire rages. Within the heart of this fire dwells the Eternal Dragon, a magical beast of limitless power that can be summoned from his fiery lair only when the seven Dragon Balls — now scattered over the face of the Earth — are found and brought together. When the seven magic Dragon Balls are united, the Eternal Dragon will appear before the adventurer who brought them together and grand that person a single wish. Then, once more the balls will be scattered to the four winds, and the dragon beast will return to his fiery lair until another brave or foolish soul rediscovers the balls and tries to bring them together again.”

– “Curse of the Blood Rubies”3

DRAGON BALL is the story of Goku, a brave, innocent young boy with incredible powers who is plunged into a mystical adventure that is played out in exotic lands filled with noble warriors, beautiful princesses, shape-changing monsters, armies of ruthless villains and a kooky, wise old man.

Saddled with a loud, pushy, teenage girl-companion who thinks nagging is something that just has to be done, Goku is thrust wide-eyed into a place where magical powers and futuristic technology exist side by side.

DRAGON BALL is the inescapable, neverending struggle between good versus evil, right versus wrong and pure hearts versus empty souls. It is the continuing saga of the quest for fervent dreams, the realization of secret innermost wishes and the insatiable hunger for a ham sandwich.

This article was entirely made with the press releases and synopses provided by FUNimation Production Inc. We want to thank Cindy Fukunaga (FUNimation), and the Promotion Department of FOX Buffalo (WUTV) for their help getting this information. 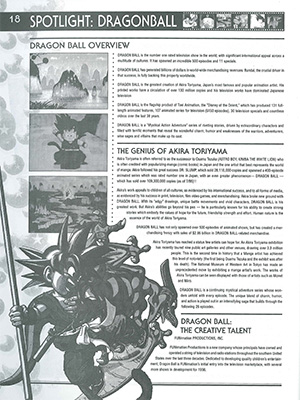 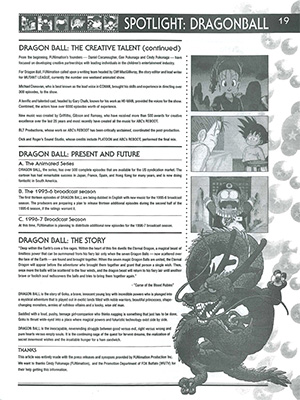 The following historical notes are included for the benefit of the reader as supplemental information and were not originally published in the book.
1 “Friendship, Effort, and Victory” are the three items that make up the motto of Shōnen Jump in Japan
2 This never ended up happening. While early merchandise advertisements showed characters such as Kuririn and Lunch that would appear in these next batch of episodes, FUNimation regrouped after 13 Dragon Ball episodes and instead returned for the 1996-1997 syndication season in September with the first season of Dragon Ball Z‘s English dubbed episodes.
3 English dubbed title of the first theatrical Dragon Ball film, which was released in America on VHS during the same timeframe as FUNimation’s production of the TV series.
Transcription & Notes: VegettoEX
« Previous Page
Press Archive