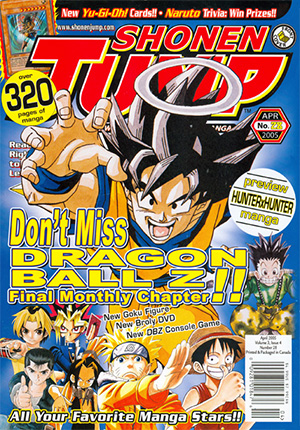 You walloped Buu’s Fury until you bled pink. You’ve rocked Budokai 1, 2, and 3. So what’s next? Why, the first Dragon Ball Z video game for console play — and not just any console. Yeah, Dragon Ball Z: Sagas comes out simultaneously on PS2, Xbox, and GameCube.

Sagas is a straight-up action game, with none of the arcane technical complexity of a high-level fighting title — just power it up, and start pounding. You’ve got 19 levels to work your way through, following the story from the Saiyan Saga through the Cell Games — which, of course, you just read right here in your favorite manga mag, SHONEN JUMP. Pick one of five heroes, including Goku and Gohan; fight it out with Raditz, Cell and other bad guys; visit planet Namek; bodyguard Dende; build a time machine for Trunks; and, of course, track down some of those elusive Dragon Balls.

You can play with a buddy, co-op style, or all by yourself against your merciless console of choice. The name of the game is combat. You can fly, you can kick, you can punch, and if you get strong enough, you can summon a kamehameha. And if you finish level 19, you unlock lots of cool characters, including Broly, and enter the Pendulum Room, which lets you play any level as any hero.

There’s much too much to report on this game, but definitely try out the friendly fire option, in which bad guys can accidentally hurt each other — and you can accidentally hurt your fellow co-op player. Check out some of the unique characters and the opening animated sequence, all of which were created just for this game. And have fun, but remember: the fate of the freakin’ planet rests in your hands!