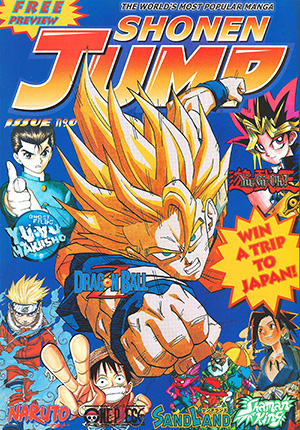 Akira Toriyama created possibly the most popular manga of all time: Dragon Ball. Today, his spiky-haired heroes and fighting storyline have influenced many artists, but no one has ever recaptured the impact of his work when it first appeared.

Toriyama became a household name in 1980 with the smash hit Dr. Slump, a slapstick manga about a cute little robot girl, Arale, and her bumbling inventor. For his next series, being a fan of Jackie Chan movies, he chose a Chinese setting and a kung-fu theme. When his one-shot Dragon Boy was well received, he decided to do more work in that style.

That was the beginning of Dragon Ball, conceived as a short story inspired by the Chinese legend Saiyûki (“Journey to the West”, also known as “The Monkey King” or simply “Monkey”). Goku, a super-strong boy with a monkey’s tail (instead of an actual monkey like in the original legend), joined Bulma, a city girl, on a quest for seven magic Dragon Balls which could grant any wish. But the story took a new direction. “In the beginning, I was planning to end Dragon Ball when all seven Dragon Balls had been collected,” Toriyama said. “The manga wasn’t too popular before the Tenka’Ichi Budôkai (Strongest Under the Heavens Martial Arts Tournament). [My editor] Torishima told me one time: ‘Your main character is too quiet. That’s why it’s not so popular.’ I wanted to win readers with the story this time around…so I was peeved, and I told him, ‘I’ll do some crowd-pleaser material, then.'”1

Thus began the shift away from Dr. Slump-like humor to amazing, superheroic martial arts action. The Dragon Ball anime series went on-air in Japan in 1986, the name of the series changing to Dragon Ball Z in 1989. (In Japan, however, the original manga is all known simply as Dragon Ball.) The series’ popularity led to foreign editions (including the English version), multiple video games, animated movies and a sequel anime series not based directly on Toriyama’s manga, Dragon Ball GT.

As an artist for a weekly magazine, Toriyama drew approximately 15 pages a week; the challenge was coming up with new ideas and maintaining suspense for fights that sometimes last hundreds of pages. “People around me tell me that they all know Goku is going to win. I am so contrary that if people say that, I’ll go out of my way to make him not win.” As the story went on, the “Dragon World” gradually expanded. “I didn’t have in mind that Goku would be an alien when he had a tail or turned into a giant ape. The same for Piccolo. I came up with that when Kami-sama showed up. I usually come up with some retrofitted explanation.”

The Dragon Ball manga concluded in Japan in 1995, spanning a total of 42 volumes, over 7000 pages, and 35 and three generations of in-character time. Since then, Toriyama has produced a few short manga stories, such as SandLand, which show his love of unique science-fiction settings and distinct character designs. His design work has also graced several video games, most notably the Dragon Warrior and Chrono Trigger RPGs and the Tobal fighting games. Perhaps one of the keys to his success is that, no matter how wild the cliffhanger, how intense the fighting, Toriyama’s art always has the friendly expressiveness of a cartoonist. Artist, cartoonist, storyteller, Toriyama will continue to entertain the world for many years to come.

The following historical notes are included for the benefit of the reader as supplemental information and were not originally published in the book.
1 This article is a sort of condensed rewriting of a similar article from the March 1998 issue of Viz’s Animerica magazine. As such, Toriyama’s quotes and anecdotes are still sourced the original seven Daizenshuu interviews; our own translations of each can be found (appropriately enough!) in our “Translations” section.
Transcription & Notes: VegettoEX
« Previous Page
Press Archive