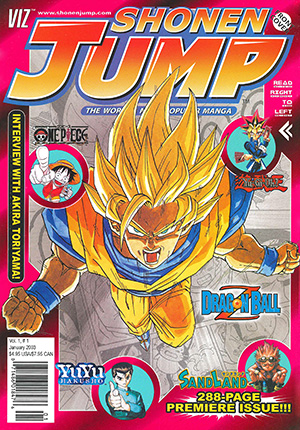 An interview with DRAGON BALL Creator Akira Toriyama
Who made martial artists better than superheroes? Who inspired the power-ups and power blasts that appear in almost every manga, anime, and video game series? Who created shonen manga’s most dramatic heroes and villains, and gave them the funniest names? Akira Toriyama, of course.

In 1984, when he created Dragon Ball (including Dragon Ball Z–in Japan, the “Z” refers only to the second part of the anime series), Akira Toriyama was already famous in Japan for his previous comedy manga series, Dr. Slump. Based on the success of his short story Dragon Boy, about a boy with dragon wings, he decided his new series would be a Chinese-style kung-fu story about a boy with a monkey’s tail. At first, a gag artist working on an action series may have seemed like a novelty, but the individuality of Toriyama’s artwork gave it a charm that more square-jawed, pecs-flexing series couldn’t match.

When the Tenka’ichi Budôkai (“Strongest-Under-the-Heavens Martial Arts Tournament”) storyline proved popular, the series took off like ki-powered wildfire. The hero, Son Goku, grew up; got stronger; saved the world; met the deities, like a hero from Greek myth; and even got married and had children. Toriyama made each new fight interesting (even when the fights last hundreds of pages), made every new character, from Bulma to Vegeta to Majin Buu, different from the ones that came before.

Dragon Ball has spawned anime, video games, and translations around the globe. But while movies and video games are necessarily group efforts (ask Toriyama–he’s designed characters for numerous games, including Dragon Warrior and Chrono Trigger), the power of manga comes from the style and personality of the artist. So with many thanks, we enter the mind of Akira Toriyama, where somewhere, among Jackie Chan and science fiction movies, among costumed heroes and children’s cartoons, is the spark behind his amazing works.

Dragon Ball was originally modeled after the ancient Chinese legend Saiyûki (“Journey to the West”, also known as “The Monkey King” or even “Monkey”). In Saiyûki, Son Goku is a powerful monkey born from a stone. Instead of being asked by Bulma to help find Dragon Balls, he is asked by Sanzo, a priest, to go from China to India in search of sacred sutras (Buddhist religious writings). After the first Dragon Ball quest is over, the stories aren’t too similar…except maybe for the moral that your former enemies can become your best friends.

(SIDEBAR) What’s in a name? 鳥山明

Akira Toriyama’s name is made up of three kanji characters. His first name, Akira, means “bright.” His last name, Toriyama, is made up of two characters: tori, meaning “bird,” and yama, meaning “mountain.” Since Toriyama is fond of using pun names for his characters, it’s not too hard to see why he named his studio “Bird Studio.”

How old were you when you first started drawing? What sorts of things did you draw?
I started copy-drawing other people’s manga characters when I was about 5 years old, but I only started drawing manga with a proper storyline when I was about 22 years old.
What are some of your artistic influences?
I was an avid anime watcher from the age of 7 until I was about 10, when I moved to manga. I think I am influenced by Osamu Tezuka’s and Walt Disney’s works which I watched during that time, such as Tetsuwan Atom (“Astro Boy”) and 101 Dalmations.
How did you become a manga artist?
I submitted a story to a monthly contest for amateur artists in Weekly Shonen Jump. It didn’t win, but afterwards, I was approached by one of the editors [Kazuhiko Torishima, now Weekly Shonen Jump senior director], and after I studied for about a year, I became a pro.
You have an incredible ability to draw anything in the world in your own distinct personal style. Do you often use reference material to draw different objects, places or things?
I almost never use reference material for places, but for objects–for example, if there’s a particular model of car that I like–I’ll use a book as a reference to draw from.
What kind of drawing materials did you use on Dragon Ball? What drawing materials do you work with today?
I’m not sure if these particular brands are available in the USA, but on Dragon Ball I used G-pens [a type of quill pen], Kent paper [a bristol board-like paper made in Japan], waterproof ink, and color inks for coloring. Today, I use a Macintosh for coloring.

I have heard that you are a fan of Jackie Chan. Out of all Jackie Chan’s movies, which is your favorite?
Drunken Master (the first one). If I hadn’t seen this movie, I would never have come up with Dragon Ball.
Are you a fan of pro wrestling? I ask because in Dragon Ball, there are some wrestling-style characters like Mister Satan.
Unfortunately, I’m not really a fan of pro wrestling.
What are your hobbies? How do you spend your spare time?
Actually, I have a lot of hobbies, but I’ve kept up with model-building the longest. In particular, I love military models.
I hear that Dragon Ball was inspired partially by a trip to China. Out of all the places you’ve been, which are particularly memorable? Do you do much sketching when you travel?
I’ve been to many places, but Australia, with what I felt was a pleasant balance between its cities and its magnificent natural spaces, moved me very much. I don’t sketch anything in particular on my trips.

From 1984 to 1995, what was your work schedule like on Dragon Ball?
The majority of manga in Japan are drawn in the shûkan (weekly) format, so I was drawing one episode every week. [Approximately 14 pages, plus a title page–Editor] But for me this pace was very hard, and I really didn’t like it.
Dragon Ball developed from a comedy series to an action/fighting series. Do you feel that your art style changed in the process?
I wasn’t particularly conscious of it, but my art style did change depending on the circumstances. But when it comes down to it, more than anything, I like drawing really silly, absurd comedies.
I’ve heard that many plot developments in Dragon Ball were influenced by letters from readers. Is this true, and if so, can you give us a concrete example?
Parts of it were, yes. For example, take Vegeta–when he first appeared he was just a bad guy, but because he became very popular, he stayed in the series from that point on.
Dragon Ball seems to have influenced many video games and manga. Where did you get the idea for the attacks that appear in Dragon Ball, such as the kamehameha and the whole idea of chi power?
Chi [also spelled “Ki”–Editor] has been used in China since ancient times, but it’s supposed to be formless and invisible. However, in manga, in order to make it easier for any reader to grasp, it was necessary to give it a shape. For the kamehameha, I myself did a lot of different poses and chose the one that I thought would work the best.
Where did you get the idea for the cosmology/mythology/religion of Dragon Ball, with deities like Kami-sama, Kaiô-sama, Kaiôshin-sama, etc.?
To be honest, I wasn’t really thinking about it too deeply. For example, as the story progressed, when it became necessary to have something exist that was greater than Kami-sama [Japanese for “God”–Editor], I created Kaiô-sama [Japanese for “Lord Emperor of the World, or Worlds”–Editor], and so on.
Why did you decide to incorporate science fiction elements in Dragon Ball, such as the Namekians, Saiyans, other alien races and space travel?
I love sci-fi movies. Especially the first Alien movie–that’s my favorite. I incorporated science fiction into Dragon Ball to expand it scope.
How do you come up with ideas for different power-ups and transformations?
When you draw a fighting manga, stronger and stronger enemies keep appearing. If a new enemy is weaker than a previous one, the readers won’t be satisfied. However, the main character is the same Goku, so it becomes necessary to make him power-up quickly and immensely. Transformation is a way of putting that in drawing which is easy for readers to understand.
Who is your favorite Dragon Ball character?
It’s Goku, naturally. For one thing, I’m a very perverse person, so I’m drawn to a pure, innocent character like him.
What is your favorite fight in Dragon Ball?
I don’t remember that well, but probably the battle with Piccolo.

I’ve heard that you are re-coloring, and possibly even re-drawing, parts of Dragon Ball for a new “Perfect Edition.” What is it like drawing Goku and Co. for the first time in a long while?1
I haven’t redrawn any of the actual manga, because then I’d start getting nit-picky about everything.2 Just new cover art. To draw it again for the first time in so long produced a very complicated mix of emotions, combining nostalgia with the feeling that I don’t want to draw Dragon Ball any more.
Dragon Ball has been translated into many different languages around the world, and seems to have an extremely universal appeal. How do you feel about it being translated into more and more languages?
Of course it makes me very happy, but I’m still trying to live like I always have, without really thinking about it.
What new projects or manga are you working on currently?
Right now, I’ve taken a step away from manga,3 and am studying things that I’ve always wanted to do, such as design and book illustration.
What message would you like to give to American fans?
That people in faraway America are fans of Dragon Ball truly makes me happy. The method of producing comics in Japan is very hectic, but it’s also rewarding because it’s possible to do both the story and art all by yourself. In this way, it’s possible to bring out one’s individuality. If this idea appeals to you, I call on you to try drawing your own manga. Because the people who can draw manga that Americans will truly love are other Americans like you.

From 1998 to 2002,4 the DRAGON BALL and DRAGON BALL Z monthly comics received thousands of letters from fans in the U.S., Canada, and around the world. We’ve taken the most interesting questions from the letters and asked Akira Toriyama himself!