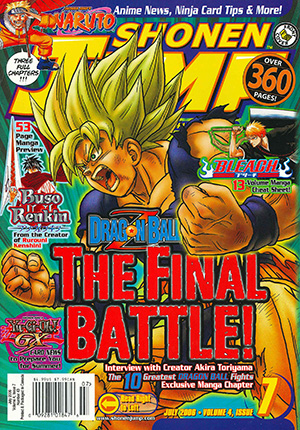 Dragon Ball From A to “Z”

From 1984 to 1995, Akira Toriyama’s Dragon Ball manga blew away readers of Japan’s Weekly Shonen Jump. In 1998, it came to America… and now, finally, the last “Kamehameha” has come! The ultimate volume of Dragon Ball Z is available, so let’s look back on Japan’s greatest martial arts manga.1

Set in a world very different from our own, where hovercraft pop out of tiny capsules and animal-headed people walk the streets, Dragon Ball is the story of Earth’s greatest hero, Son Goku… and of Earth’s greatest treasure, the Dragon Balls, which can grant any wish. When the series begins, Goku is just a young, monkey-tailed boy, good-hearted by half-feral. Through tough kung-fu training, he eventually becomes one of the greatest fighters on the planet, able to shoot blasts of chi energy, such as the mighty “Kamehameha” attack, at will.

Goku later discovers the truth behind his super strength (and monkey tail): he is a space alien, one of the warlike Saiyans, who was sent to the earth as a baby! But Goku fights against the evil schemes of his fellow Saiyans, and in turn saves the planet from one bad guy after another: Piccolo, Vegeta, Freeza, Cell. As the series goes on, the fights become bigger and bigger, until the characters are strong enough to destroy the planet — by accident, if they’re not careful.

But Dragon Ball is a true epic, and after many adventures Goku finally dies, leaving behind two sons, Gohan and Goten. Then the Earth is invaded by a new enemy, Boo the Djinn,2 a magical being who craves pure destruction! Boo gobbles up all of Earth’s heroes, including Gohan and Goten, adding their power to its own.

Desperate, the Lord of Lords (the supreme deity of the Dragon Ball universe) brings Goku back to life and gives him a secret weapon — the magical Potara Earrings which can fuse two fighters into one… permanently! Looking for a suitable partner, Goku chooses his old rival Vegeta, the ruthless prince of the Saiyans. Putting aside their differences, the two fighters merge into the ultimate Saiyan warrior… the almighty Vegerot!3

Now, as the Lord of Lords watches from afar, Vegerot fights Boo’s awesome magical powers. Can Vegerot defeat Boo and use the Dragon Balls to restore the devastated planet Earth? Or does Boo have one last trick up its sleeve…?

No other fighting series — except maybe Knights of the Zodiac (Saint Seiya) — delivers so much action, but Dragon Ball and Dragon Ball Z are funny too. (Remember, Akira Toriyama is also the creator of Dr. Slump.) Just check out this incredible fight scene from the final volume of the series, Dragon Ball Z!

The following historical notes are included for the benefit of the reader as supplemental information and were not originally published in the book.
1 In this magazine issue, Viz is previewing their release of the Dragon Ball Z manga’s twenty-sixth volume (the forty-second volume overall), wrapping up their first ever complete release of the series.
2 Viz’s adaptation of 魔人ブウ (Majin Boo)
3 Viz’s adaptation of ベジット (Bejitto), a fusion of ベジータ (Bejīta) and カカロット (Kakarotto; Goku’s original Saiyan name). This marks the third official name spelling for the character in America, following “Vegetto” in the PlayStation video game Final Bout, and FUNimation’s “Vegito” in their English adaptation of the television series.
Transcription & Notes: VegettoEX
« Previous Page
Press Archive