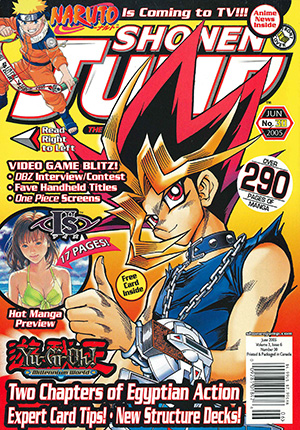 Leading a team of artistic types can be an adventure. Meet Jon Warner: Lead Designer at Avalanche Software in Salt Lake City. His job literally was an adventure — as adventure video game, that is. He and his team helped to develop Dragon Ball Z: Sagas, which was released by Atari in March for the GameCube, Playstation 2 and Xbox.

Sagas is the first multi-console American-designed-and-developed Dragon Ball Z game to hit the market. Jon and his team of 20 took a little over a year to work their magic on this new action/adventure addition to an already long line of DBZ games. As the game’s release date neared he took time to talk about the blood, sweat and code that went into making Sagas.

SHONEN JUMP: What does it take to make a game like this?
JON WARNER: It takes a lot of time and a lot of cooperation with the Japanese licensors, so that you can get the authentic feel and story for the game. It also takes a full staff of very talented artists and programmers to pull it all together.
How are those people selected?
We had a team here who was stoked about doing Dragon Ball Z, so we had a core team pretty much ready to go. And when we had other staff members who rolled off of other projects and helped us out. The team was broken up into artists, world builders and programmers.
What is it like on a typical day leading this team designing Sagas?
It kind of progresses depending on the state of the game. Early on in the design cycle, you’re more involved with writing design documents and brainstorming for different game play ideas. There’s a lot of meetings, writing and thinking out how you want things to behave and flow. Later in the process, once you have that nailed down, my day is more typically spent helping out my team members chasing down issues that need to be solved.
What do world builders do?
They are the level designers. They put together the art assets and lay out a level in the game’s play flow. There were five world builders, roughly 10 artists and the remaining members were programmers.
Did you use the same voice actors from the anime?
We used all the voice actors from the anime. All the characters have unique voice parts that they speak. All the responses the villains have are taunts and replies that they give when you battle them. And your missions are given to you by the voices of Master Roshi, Bulma and Kami.
What did you want to be when you were growing up? And how did you end up getting a job as a game designer?
I wanted to be Indiana Jones when I was growing up. I wanted to somehow find a way to make a living playing video games or telling stories. It took me awhile to get around to it. I was in the military for eight years. Then I obtained my college degree and started working in software.
Was it difficult to get into the software field and did you study that in college?
No, I didn’t study it in college. And it wasn’t too difficult. I started basically as a tester for a software company and moved up from there. In college, I actually studied political science. I got pretty lucky. I developed a lot of the skills I need to have [in game design] in the military. The skill that has helped me the most is being able to think analytically. Also, having a strong interest in storytelling and games has been helpful. And being well read has helped me tremendously.
How has being well read helped you?
The breadth of ideas that are available to you when you do a lot of reading. When you’re thinking up ideas for plot lines in a game or even game play, you’re able to draw on all manner of things, i.e. movies that you’ve watched, books that you’ve read. And so obviously the more that you read, the broader or deeper reservoir you have to draw from.
Transcription & Notes: VegettoEX
« Previous Page
Press Archive