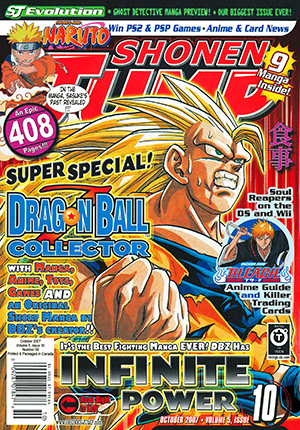 If a cat and Majin Boo had a child and they dressed it up as Son Goku… you’d get something like Nekomajin Z.

When Dragon Ball Z‘s Goku, Vegeta and Majin Boo were busy blasting each other to bits in the manga, they were also making cameo appearances in another series by DBZ creator Akira Toriyama. That series, called Nekomajin (neko = cat, majin = magical being), told the adventures of three different members of a race of cat-like creatures called (surprise!) Nekomajin, including one named Z who is the hero of the chapter you’re about to read.

SHONEN JUMP is proud to bring you the first chapter of Nekomajin ever to be published in English!1 The chapter that follows is one of eight that appeared in Japan’s Shonen Jump between 1999 and 2005, and were compiled into a single volume that was printed on nice, big pages and including snazzy color art.

But before you get started, we’ll answer three questions to give you a head start.

1. What exactly is a Nekomajin?

As Toriyama-sensei tells it, a Nekomajin is “a cat-like creature that can use a bit of magic.” Twenty-eight Nekomajin are confirmed to exist in the world, and while nothing is known of their life cycle, they appear to live in the countryside and enjoy a simple, rustic life. Their so-called magic is nothing special, but Nekomajin seem to excel in martial arts.

2. Who is the cave boy, and why does he offer his koala?

We don’t know the boy’s name2, but he’s a friend of Nekomajin Z’s and hangs out with him. Whenever Nekomajin Z and the boy spot a tourist (especially a Japanese one) they try to extort money by offering a photo opportunity with a fake koala, which is actually Nekomajin Z in disguise! (Why? Er… why not?)

3. What does the writing on the Nekomajin’s shirt say?

The symbol on the front of Z’s shirt is katakana for “ネ” (ne), which stands for “Nekomajin.” And fans of Dragon Ball Z will know that Z’s costume looks a lot like Son Goku’s…

The following historical notes are included for the benefit of the reader as supplemental information and were not originally published in the book.
1 Viz began with and has never published any Neko Majin beyond this chapter: Neko Majin Z 5, the eighth and final chapter released in the overall Neko Majin series. It was published here without a number attached to its title.
2 The character is only ever referred to as shōnen (literally just “young boy”).
Transcription & Notes: VegettoEX
« Previous Page
Press Archive