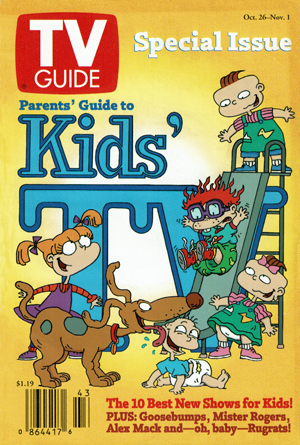 Japanese animation–anime, to the initiated–is rapidly becoming a full-fledged fad here, and Japan’s top children’s show is riding that wave into U.S. syndication. An action epic, Dragon Ball Z (check TV GUIDE listings) turns the Superman myth upside down: Its hero, Goku, also came to Earth as an infant with powers far beyond those of mortal men–but he was sent to destroy the planet, not defend it. Fortunately, a wise martial-arts master (along with a bonk on the head) turned him away from evil toward family values, exemplified by his wife, infant son, and friends, all of whom happen to have mystical abilities. Good thing, too, because supervillains from Goku’s planet have shown up in search of the crystal Dragon Balls that will enable them to conquer the universe. That’s just for starters. Dragon Ball Z‘s blend of complex sci-fi and fantasy concepts, silly cartoon comedy, and well-rendered action may seem strange unless you happen to possess a child’s freedom from preconceptions. After all, Saban Entertainment’s previous Japanese import was a little weird and wacky, too. You may have heard of it. It was called Mighty Morphin Power Rangers. 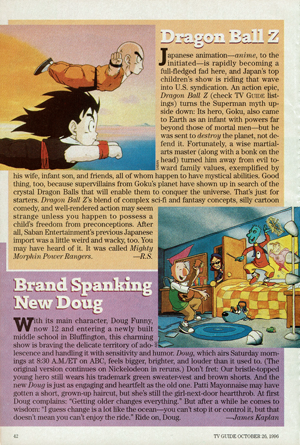