Even with the arrival of DragonBall Kai and its plethora of new themes and insert songs, one constant has remained over on the video game side of things: Hironobu Kageyama. The musical voice of DragonBall Z has contributed new vocal theme songs to nearly every major console release over the last couple generations of games, bringing along what tiny thread of musical familiarity remains before voice and music replacements were the norm even over on the Japanese side of things.

Despite showing up a year earlier for the first Raging Blast with “Progression“, a new vocal theme song from Kageyama was not a sure thing for the sequel. In what may have been the shortest amount of time prior to a game’s release before announcing its theme song, we only learned in September 2010 that he would be back for that November’s Raging Blast 2 with “Battle of Omega” (compared with a July music announcement for a November game release in 2009).

Unlike prior songs with cameos in trailers, fans actually got a taste of the full song in the demo for Raging Blast 2, with it playing during the new “Raging Soul” fighting state.

The past few songs from Kageyama have certainly been above average (if not great), but there has yet to be a song since the PlayStation 2 days that has universally blown fans away. Would this be it?

“Progression” came along in 2009 with an appropriate amount of hype due to it being Hironobu Kageyama’s sole contribution to the franchise since the musical shift in DragonBall Kai a year prior. The anticipation over whether Raging Blast 2 would receive a musical opening at all (or if it would treat Plan to Eradicate the Super Saiyans as its “opening”) brought along an equivalent amount of hype when “Battle of Omega” was finally announced a mere two months before the game’s release.

As noted, while the game’s demo did not feature the opening sequence (which Burst Limit had done a few years prior), the entire song could be heard by entering “Raging Soul” mode during a fight — the song would play in the background until the “Raging Soul” meter ran out, or would loop over and over while the game was paused, which also allowed for noise-free listening. The song certainly provided a sense of adrenaline-running urgency, but before we hit the music, we will first take a look at the CD single release, itself.

Unlike many previous releases for the franchise (especially under Kai), this CD single came only in one version; there was no “Limited Edition” version, and no special pre-order bonuses. Retailing for ¥1200 and containing four tracks (the title song, a b-side, and karaoke versions of both), it fell in line with the standard release style.

Much like the “Progression” CD single cover mirrored its respective game’s artwork, “Battle of Omega” does the same with the cover image of the heroes and villains surrounding Hatchihyack over top a red background. 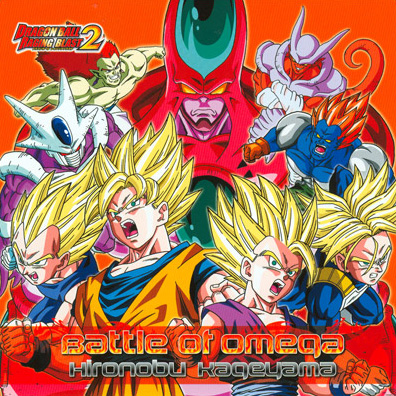 Just as the cover seems to be an appropriate update while following the trend from the first game, the back cover is a retread of last year’s packaging with a standing-pose of Hironobu Kageyama behind the track listing and basic information. 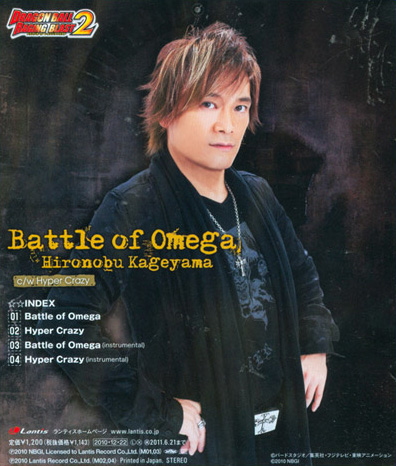 Amazingly enough, this is perhaps the most controversial aspect of the entire release. You may not notice it without being incredibly familiar with Kageyama, but a closer inspection (particularly with last year’s CD single also in hand) reveals a disturbing change: 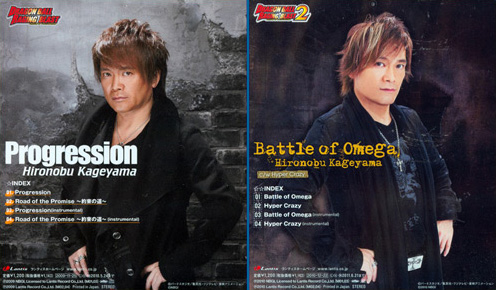 Kageyama’s entire face has been airbrushed clean of any wrinkles and other signs of age. Clearly someone decided that Kageyama looked too old. Well, he is getting older. Embrace it. We all already have. There is no need to hide anything. This was a horrible decision, and one that we hope will never happen again. He looks nothing like himself, and insultingly so.

The inside lyrics follow the standard trend of white text on top of a bold-yet-light background stacked vertically (presented side-by-side below). Images of Trunks and Vegeta can be faintly seen in the background.

The back of the inside booklet lists the production credits with no real surprises anywhere. Kenji Yamamoto (“Kenz”) returns for recording and synthesizer duties at his 59’s Studio, with Yuka Muraishi and “cAnON.” contributing backing vocals. 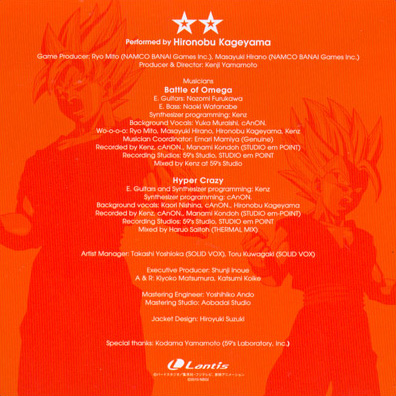 Interestingly, the disc itself has both the Raging Blast 2 logo as well as the DragonBall Kai logo… despite nothing about this game or song being otherwise branded as such. It is not a huge surprise to see it pop up (with Kai becoming almost the de facto branding for anything related to the franchise these days), but is still a somewhat odd and random inclusion.

Whereas “Progression” brought back the triumphant feeling in the music, “Battle of Omega” clearly does a grab-back at the “Super Survivor” style of rockin’ out and getting pumped up. This could not be any more evident than in the animation that accompanies it in the game, which starts off with a shot of Coola and immediately transitions into fighting, rather than the common trope of first introducing the heroes before the villains show up.

The song itself does not tread any particularly new ground for either Kageyama or the franchise, but still manages to feel somewhat fresh. Perhaps my only concern with its arrangement and composition is that since it follows such a traditional song structure down to the finest detail of the chorus lead-ins, I found myself able to sing the lyrics to the DragonBall Z 3 / Budokai 3 opening theme (“Ore wa Tokoton Tomaranai!!“) perfectly in place over top the new song. Sure, one could probably force lyrics on top of any of the various other songs, but this one felt too uncanny of a match to not point out. Perhaps a mash-up is in order…?

If the DB-franchise comparisons are not enough for you, the Raging Blast 2 “Quick Look” preview video from Giant Bomb notes a moderate similarity with the American Sonic CD opening theme, “Sonic Boom“. It is a stretch of a comparison, but one that can definitely be forced upon the song if you try hard enough.

The arrangement is difficult to expand upon in words since it does so little to add to the song. Unlike “Progression” with its horns, “Battle of Omega” sticks with quick synth crashes to transition movements of the song. They do not feel out of place at all, but are just not that interesting.

The standard guitar solo is indeed present in this year’s song, though it is much shorter than one would expect and follows a pretty interesting vocal breakdown from Kageyama and cAnON.

Lyrically the song is the standard fare about power and surviving to the end. There are a few clever bits of rhyming with English words (“dynamite” / “in the night” / “to the fight”), and the sheer amount of English seems far greater than in some of the other recent songs.

This particular song had much more of a chance to get stuck in my head than any other game theme due to its usage for “Raging Soul” in Raging Blast 2. Whether or not that affected my long-term enjoyment of the song significantly is debatable. Nonetheless, it is a fantastically solid song, especially for its purposes in the game, and one that all fans will probably want to add to their library.

“Hyper Crazy” is what one would expect from a b-side on a CD single for a video game opening theme song from Hironobu Kageyama, especially compared to last year’s “ROAD OF THE PROMISE” which, while it was a perfectly fine song, simply did not feel at home with its counterpart.

That being said, something is missing from “Hyper Crazy“.

The song begins with some pounding synth/guitar beats and ever-so-slightly distorted vocals from Kageyama (joined shortly by cAnON.), and sounds like it is heading into fantastic territory. When the song hits the chorus, however, that missing element comes into play. I have no idea what that missing element actually is, but it is not there. Perhaps it is a weak production, the sound just not feeling “full” enough… whatever it is, I am left with a “Huh…” sort of empty feeling, as if the song were never completely finished.

The feet-stamping and chanting breakdown is a fun time, but beyond that, I am unable to pinpoint a truly spectacular portion of the song as a whole… though you will invariably find yourself singing, “Every day, every night, hyper crazy!” to yourself a few times afterward.

The song reminds me of what would have been a filler image song had the Hit Song Collection continued onward into the twenties of volumes. It is an OK song and I will definitely listen to it a few times, but when you consider the package as a whole and the fantastic work that Kageyama has put out on his own elsewhere, it is a tough sell.

As always with karaoke versions, the lack of Kageyama overpowering the song gives a great look at the subtle backing harmonies that build the song up to such great heights. The guitar work from Nozomi Furukawa also gets a chance to shine with some fun shifts between the two channels. Beyond that, this is a standard karaoke track that only those into the scene will make much use of.

With the vocal version of the song already feeling like an incomplete thought, it should be no surprise that the karaoke version feels lifeless. A bit more of Kenji Yamamoto’s synth programming shines through without the vocals on top, but that is the extent of anything interesting here.

“Battle of Omega” is an interesting case. Rarely (if at all) have we been able to listen to the full vocal version of a game’s theme song prior to its respective CD single release — games like DragonBall Z / Budokai 2 & 3 on the PS2 featured full-length versions of their themes, but were instrumental-only with a saxophone taking the place of the human vocals. In Raging Blast 2, the theme song plays during an in-game character technique, and can also be selected from the “Museum” area for general listening. On top of that, a guitar version of the song (similar to the saxophone versions from years past) can be selected in the game, and can actually be used in-game in place of the vocal version.

Due to these inclusions, many fans may have already gotten their fill of the song before its CD single release. Only the most dedicated of fans (and Kageyama enthusiasts) will probably look into purchasing the disc, and without the inclusion of the guitar version from the game in favor of only a standard karaoke version, it feels like a somewhat incomplete package.

We said the exact same thing with last year’s game song CD single, but we mean it more than ever with “Battle of Omega“: this is probably the type of CD you will want to toss in with a larger order to make the best use of your shipping costs from Japan. It is a perfectly good song that we recommend, but if its inclusion in-game has been enough for you and a moderate disappointment of a b-side does not convince you otherwise, this release is shockingly enough a temporary “pass”.

Battle of Omega may be available at the following retailers: