It seemed as if enough was enough: following his dissatisfaction with Dragon Ball Evolution, original manga author Akira Toriyama returned to his most popular franchise in 2013 to overhaul an in-progress Battle of Gods. What once featured a muscular, caped Goku fighting against a lizard became a celebratory reunion with a pared down transformation fighting against a neutral cat god with a job to do. Our own universe was seemingly just the tip of the iceberg for Goku’s future battles.

Toriyama clearly enjoyed getting back in the saddle: Resurrection ‘F’ marks the debut of the author’s first theatrical script, while longtime animation supervisor Tadayoshi Yamamuro gets bumped up to director.

The gang is all here. Including Freeza. And those Battle of Gods guys. And there’s a bunch of fighting.

Review of this film was made possible through a copy provided by FUNimation. If you are interested in contributing to the site, please visit our “Donate” page or contact us directly.

Plenty of people have described it this way, but it’s the most accurate description out there: Resurrection ‘F’ feels like a classic 1990s Toei Dragon Ball film with Akira Toriyama in charge. Longtime fans can probably extrapolate everything they need to know from that one statement; it says a lot without needing to actually say much!

As opposed to Battle of Gods, which expanded the Dragon World with lore and teases of universal exploration, Resurrection ‘F’ falls back into the “inconsequential romp of a good time” style. That is to say, nothing within the confines of the film has any effect on the larger world, but it is a fun time nonetheless. Villain threatens Earth, heroes put up a fight and struggle for a bit, the stronger heroes arrive, they fight for a while, power-ups are revealed, eventually the good guys win, and everyone moves on with their lives. Dragon Ball movies in a nutshell, right?

Yes and no. Resurrection ‘F’ manages to swap up the formula — while somehow adhering to it at the same time — in its own way. With Akira Toriyama in charge of the script, we get a formulaic movie propped up by spot-on character interactions and an attention to detail unrivaled by anything that came before.

Jaco’s inclusion concerned me prior to the film’s release. I love the character, but with him technically only ever being shown to us “before” the series began, would he be able to fit in with the older cast? Would he feel shoehorned in as nothing more than Toriyama’s latest pet character? Perhaps as a testament to the author’s skill, Jaco feels right at home. Fans who have not yet read the 2013 one-shot may feel completely left in the dust (particularly with a reference to Bulma’s sister Tights), but viewers are quickly brought up-to-speed. Even amidst the other fight sequences, Jaco comes close to stealing the show, and is sure to secure a whole new batch of fans. 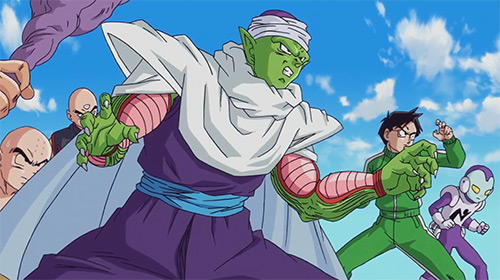 While the movie’s underlying plot is as simple as any prior film, Toriyama’s flourishes help to even it out. The climax can be seen coming a mile away courtesy of Whis’ early training exposition, but — cliché as it may be to say — it is the journey, not the destination, that makes is so much fun.

Bulma screaming at Freeza? Jaco tiptoeing his way through and away from battles? Kuririn fighting crime? Who needs a big, drawn-out fight between superpowers on top of that? Indeed, once Goku shows up and the real fight begins is precisely when the movie begins to drag. Within the confines of a movie, seven minutes of a base-level Goku and fourth-form Freeza fighting and blabbing back at each other feels like a wasted eternity.

“The big fight” is where we lose everything that made the film special: characters. As condensed as the cast is from where it could be (no Goten and Trunks, Majin Boo, Yamcha, etc.), literally plopping them all together in a bubble to watch from the sidelines? They may as well not even be there anymore.

Beerus and Whis may somehow be both the biggest winners and losers in terms of character development. Their introduction and setup in Battle of Gods gave us two of the most engaging characters we have ever seen. While they return in Resurrection ‘F’, they too are reduced to mere caricatures of themselves: Beerus is imposing, neutral, and loves food; Whis is hammy, all-powerful, and loves food. Got it, thanks. In spite of this reduction, they are simply so much fun to have around, it’s almost excusable. 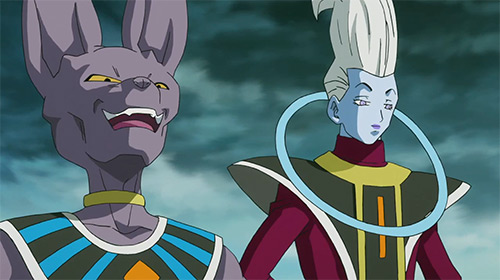 Toriyama’s classic execution comes in the form of character interaction, sure, but also in plot points. Never one for detailed explanations, Toriyama has all but abandoned the Super Saiyan God design work and lore from Battle of Gods by introducing yet another new transformation. While the new “Super Saiyan God Super Saiyan” form (yes, that’s its real name, and no, it’s not given a proper name in the film itself in either language) at least tries to tie back to 2013’s film, it does come across as little more than a design meant to sell merchandise and video game DLC. A single sentence is meant to explain and justify its existence for Goku, while Vegeta fans may be left scratching their heads wondering if they missed a movie or special episode. On the other hand, Freeza’s new “Golden” form somehow works with its simplicity. A throwaway line seemingly meant to mock the original Super Saiyan transformation justifies its name, while Goku and Vegeta calmly noting its drawback shows who’s really in charge the entire time. 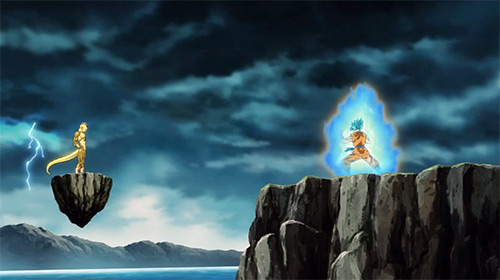 You could be forgiven for assuming Tadayoshi Yamamuro has experience with directing: Resurrection ‘F’ hits all the notes of a classic Dragon Ball Z film while having a visual flair all its own, even distinct from 2013’s Battle of Gods.

Colors are vibrant and diverse with above-average animation to round out the package. While the fight scenes — particularly the skirmishes against Freeza’s army — are fluid and impressive, we are also subjected to plenty of scenes with yapping mouths atop static background landscapes, along with the occasional (awful) CGI insertion. It’s more consistent than Battle of Gods, but with fewer high points. 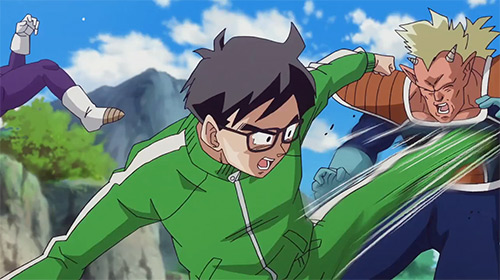 Norihito Sumitomo returns as the film’s musical composer, having recently contributed to Battle of Gods and the Majin Boo arc of Dragon Ball Kai (along with the on-going Dragon Ball Super TV series). As with his prior work, it simply exists: it neither benefits nor detracts from the film.

Serving as the inspiration for the film in the first place, Maximum the Hormone’s “F” receives its rightful inclusion as a “battle song” (used first as a vocal version during Freeza’s restoration, then again as an instrumental during his battle with Goku). That being said, it does not feel at home in either placement.

Momoiro Clover Z contributes “Pledge of ‘Z'” as the closing theme to the film. The group’s influences from and friendships with major rock groups shine through, with crazy drum fills and heavy guitar work leading into chipper chorus sing-alongs. It is not nearly as out-of-place as one might think and serves as a fun wrap-up to the film. The group recorded their own English version of the song for the international release; as opposed to Battle of Gods which featured English songs even in the Japanese language track, hopefully we can receive both language versions in the Resurrection ‘F’ home release. 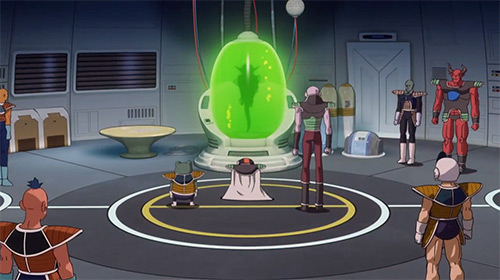 On the other hand, helping the film to sound like classic Dragon Ball is Hidenori Arai. Observant fans may have noticed a lack of established and consistent sound effects in Dragon Ball Super; Arai brings all the staple sounds to Resurrection ‘F’, including mechanical Freeza walking and landing from the sky with a fart-like noise. We wouldn’t want it any other way.

Resurrection ‘F’ excels due to its writing and character interaction, which obviously hits high notes courtesy of Masako Nozawa (Son Goku, et al.), Ryō Horikawa (Vegeta), and Ryūsei Nakao (Freeza) in Japanese. The cast have played these roles for years and know them inside and out; a chance for Goku and Freeza to quip at each other anew (as opposed to recycled dialog in Dragon Ball Kai, for example) is something all fans can enjoy.

This thankfully comes across in FUNimation’s English dub, with Chris Ayres delivering a performance that can be summed up in one word: Freeza. This is the Freeza that has always existed in the manga and courtesy of Nakao in Japanese. This is the Freeza that English dub fans have always deserved. While his work in Dragon Ball Kai set the stage, Ayres justifies even this crusty shell of a Japanese version fan shedding a tear of joy. Prepare yourself for Freeza’s mental breakdown toward the end of the film. 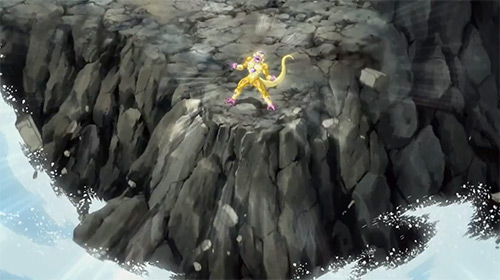 The rest of the cast holds up as well. Todd Haberkorn joins as Jaco, delivering just the right amount of absurdity and cockiness from the patrolman as Natsuki Hanae. Jason Douglas and Ian Sinclair reprise their roles as Beerus and Whis, respectively, channeling the same tone as Kōichi Yamadera and Masakazu Morita. While Sean Schemmel’s “serious” Goku is still not as short and direct as perhaps it could be, his sly and chipper side channels the same Goku we know and love from Nozawa, and plays nicely alongside both Ayres and Christopher Sabat as Vegeta. Monica Rial is another unexpected star as she battles wits with Freeza and pleads with Whis for protection.

The English adaptation also remains faithful to the original Japanese script, a la the company’s work on Dragon Ball Kai and Battle of Gods. A couple punch-ups appear here and there (things like “You’re ‘go’ for Krillin!”), but otherwise deliver the exact same tone and message as the Japanese version. All of the fan-favorite lines are adapted accurately, with the surrounding conversation right in line.

Whereas Battle of Gods felt like an intentional celebratory reunion and simultaneous grab at new fans, Resurrection ‘F’ is squarely aimed at existing Dragon Ball fans. The standalone, shōnen movie formula is in full effect and will almost certainly keep all but the most devoted fans away and slightly bored.

Is it too absurd to simply say, “Fans of _______ will surely enjoy _______!”…? It is. I know, trust me. Acknowledging a hack statement doesn’t make it any less of a hack statement, but it’s true. Akira Toriyama delivers a script that fully understands its characters alongside engaging choreography and direction from Tadayoshi Yamamuro. We get a worthwhile rematch between Goku and Freeza. Some of our favorite characters are back, and even the old turtle sage gets a chance to fight again. Sure, it has no bearing on the larger story, but we’re OK with that (again) every once in a while, right? 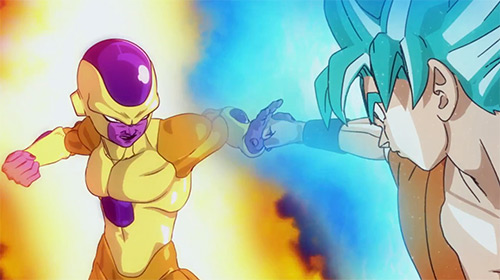 Perhaps the biggest concern for devoted fans will be the film’s upcoming “replacement” in Dragon Ball Super. Resurrection ‘F’ already feels like a series of episodes strung together, and may even work better in that format. There are enough holes in the story that could be fun to explore with an expanded runtime (e.g., Freeza’s training, how Vegeta came to reach his new form, etc.), and an extended edition of the film seems unlikely with Super‘s adaptation on the horizon.

Still, it’s great to see Freeza again (not as a ghost warrior, and not as an Odd Couple bit of comedy relief). Resurrection ‘F’ manages to stand on its own as a solid, one-off story and a fun time with the Dragon Ball gang.

Reviews
Connect With Us
Support Us
Your support for Kanzenshuu is what keeps us going. You can help by donating to us directly, or by shopping online at certain retailers through our affiliate links below. Every bit counts and helps contribute to our server fees and bringing you new site content, reviews, and contest items.