Takayoshi Tanimoto was announced as the new performer for the opening theme to the then-upcoming “refreshed” version of the Dragon Ball Z TV series, Dragon Ball Kai, in early March 2009. While fans recently had a single exception in the form of Ayumi Hamasaki for Dragon Ball Evolution, Hironobu Kageyama had up until this point still been the performer of all DBZ-related songs, including new music for as recent a release as Infinite World on the PlayStation 2.

How were fans going to react to someone else’s voice singing Dragon Ball Z music…?

The review of this CD was made possible by a generous donation from dracostarhome. If you are interested in contributing to the site, please visit our “Donate” page.

My familiarity with Takayoshi Tanimoto was essentially zilch. Upon first hearing the name, I did as many fans probably did that day and plopped it into Google and Anime News Network to see what his catalogue would be. Despite having no ties to Hironobu Kageyama or JAM Project, Tanimoto had relevant experience doing music for shows like Konjiki no Gash Bell!! and even sentai programs like Jūken Sentai Gekiranger.

Despite this, I still had a difficult time coming to grips with the fact that a new musical voice was going to be the first impression I would have of this “new” series. Hironobu Kageyama defines the music of Dragon Ball Z, and for a fan of so many years… this would not be easy.

I decided not to listen to any of Tanimoto’s previous music for fear of dismissing the upcoming opening theme, “Dragon Soul”, before I had a chance to actually hear it. My first listen would be when the show first premiered on Japanese television (watched live over the Internet), hopefully riding the wave of excitement.

My initial impressions from 05 April 2009 and the first episode of Dragon Ball Kai remain mostly the same now with a couple months of familiarity with the tune, and also with the full-length version on CD. While it will never hold a candle to “We Gotta Power”, nevermind “CHA-LA HEAD-CHA-LA”, Tanimoto does a surprisingly respectable job of filling Kageyama’s shoes and bringing Dragon Ball Z to a whole new audience.

Before dipping back into the music, let’s examine the CD single release, itself. There are two versions released (a regular and “Limited Edition” version), though the differences are negligible. Retailing for only ¥100 more than the regular version at ¥1300, the “Limited Edition” version contains a special card to be used in the Dragon Battlers arcade game, and an extra slip that surrounds the back of the case promoting this card and its game. 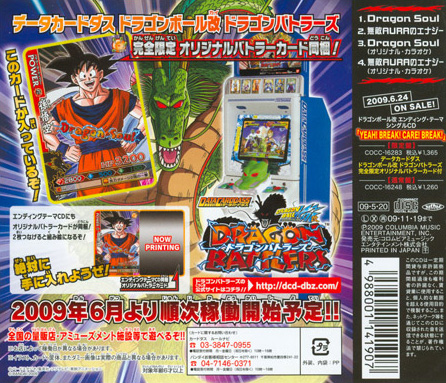 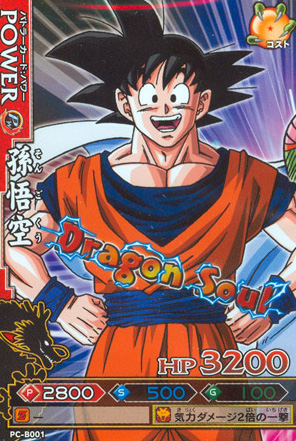 The cover image is the standard Dragon Ball Kai promotional image being used in a variety of locations, such as the series’ official website. It is fairly representative of the series, and seems like a logical choice for an image. 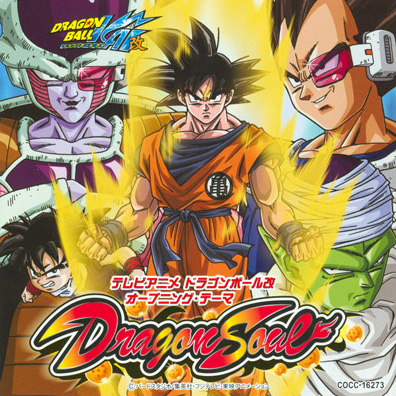 The normal back cover features a stylized, golden Shenlong on a bright, red background. As opposed to some other recent CDs, the text is actually legible here. The “Dragon Soul” logo is repeated along with the CD’s track listing. 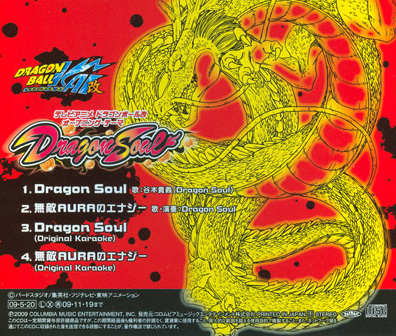 The insert contains lyrics to both of the songs on the CD single. Unlike the back cover, however, the text inside can be difficult to read due to its small size.

The first-run pressing of the CD was delivered with a special bonus: a poster. The base image is the same as the cover art for the CD, but the poster also has plugs for the next CD single (the closing theme, “Yeah! Break! Care! Break!“) and the air-time for Dragon Ball Kai, itself, on Japanese television. 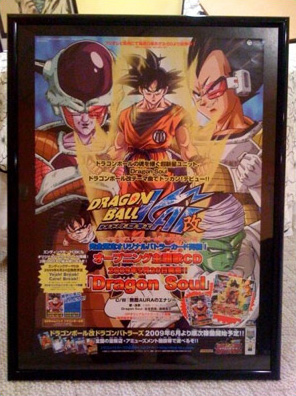 The opening to the song reminds me very much of a theme song for any other children’s show; it is upbeat, clearly not taking itself too seriously, and has a fun tone to it… but it does not necessarily take any risks to set itself apart. Overall, that is “Dragon Soul” in a nutshell.

Takayoshi Tanimoto’s vocals fit the style of the song well. The lyrics are somewhat clearly enunciated, making it easy to follow along. There are times where it feels like a slight growl or roll over syllables would put a little more heart into it (such as the breakdown immediately before the first standard chorus), but since it is otherwise well on-key and powerfully sung, it does not detract too much from the performance.

The guitar work is pretty standard throughout most the song, getting few chances to really stand out. One of the only cases where you hear it shining through are on transitional moments in the song, such as on the “makenaī” just before the two-minute mark. Even ignoring somewhat-recent guitar work from Steve Lukather in the Budokai video game theme songs, we always had a moment for a little guitar solo in theme songs, such as in “We Gotta Power”. Thankfully, “Dragon Soul” follows this same pattern, and the guitar breaks out of its former monotony and wails away for a short time before the chorus reprise kicks in near the end.

While I consider the guitar solo element a good holdover from the olden days of anime (and specifically, DBZ) music, one element that always bugged me was the requisite key-change for one final chorus at the end of a song. It is an entirely arbitrary prolonging of the song, and does not add anything of benefit. Instead of a key change, a final chorus with added instrumentation, fuller backing-vocals, or any other number of other ways to emphasize the music and its finality would be better than this.

“Dragon Soul” is a good song. It is not break-out fantastic, but it is certainly not bad. It does more than just exist, which is really all I could have asked for with a “new” theme song to a revision of an older show. It will never replace “CHA-LA HEAD-CHA-LA” in my heart, but it was certainly a worthy effort. It almost feels as if it belongs to a “dub” of the series (which, in a way, <ī>Kai somewhat is), and so “Dragon Soul” sits up there with something like Italy’s “What’s My Destiny?” more so than the original music… and you know what? That’s not so bad a place to be.

We really had no idea what to expect out of a b-side from this CD single release. We knew it was not going to be the closing theme to the series, “Yeah! Break! Care! Break!”, since it had already been announced to have its own, individual, forthcoming CD single. We were unaware of any insert songs in Dragon Ball Kai, so it was clear that a standard image song would rear its (ugly?) head.

What we ended up with, as expected, was a proficient image song. Takayoshi Tanimoto goes further into what may be classified as a standard “shōnen sound” with “Muteki AURA no Enaji”, including a perhaps-intentional note- and structural-similarity of its chorus to JAM Project’s “SKILL”. Everything you would expect from a song dripping with shōnen spirit is here – pawā (power), yume (dreams), ashita (tomorrow), etc.

The opening double-bass-drums set up the speed of the song quite well; it finishes out under three-and-a-half minutes before you know what hit you. Within this time span we get clear lyrics, just-kinda-there backing instrumentation, and (of course) the classic key-change for a final chorus

“Muteki AURA no Enaji” is a solid but forgettable song. By the next month after the CD single release, it was impossible for me to recall the general tune.

One thing I was happy to confirm with the karaoke version of “Dragon Soul” was the lack of double-tracking on Takayoshi Tanimoto’s vocals (for the most part). There are the occasional self-harmonies right before a chorus, but overall, his delivery is genuine and pure… and therefore missing in the karaoke version, which is perfectly fine. In this case, it acts more as an “instrumental” than a “karaoke” version, though the genuine backing vocals are still present.

Since Tanimoto’s vocals are really the central focus of the song, there is not much to comment on with the karaoke version. The lack of backing instrumentation is more prevalent when it is all you are listening to. It is certainly an appropriate inclusion of the CD, but there is no value added with it.

There is slightly more of Takayoshi Tanimoto backing his own vocals in this particular song, though it does seem to fit with the style of the song more-so than it would in “Dragon Soul”. The synth instrumentation is brought out a little more without the verses on top of them, which you will probably take back to the vocal version and acknowledge more than you would have before.

Being a forgettable song in its proper format, the karaoke version is more of the same. Unless the song strikes you in some fanboy way, you are not going to get much mileage out of its karaoke version.

Essentially being your first impression of Dragon Ball Kai, the theme song is either going to grab you or it is not. At the same time, even if you dislike the song, it will probably infect you in some way and remain in your head for years to come. It may be a good idea to pick up the CD single for “Dragon Soul” just so you can play the song and get the darn thing out of your head from time to time. At the end of the day, though, it is a solid song that is probably worthy of picking up. At a base price of ¥1200 yen, though, it is more than we are used to paying for the amount of material we typically get (especially in this day and age of budged-priced re-issues of Dragon Ball Z music). If you are a huge fan of the song, do not hesitate to pick it up. If you only mostly like the song, it may be a better idea to toss the CD single in with another order to make the most of shipping costs.

For another look at this CD single with samples from each song, check out Episode #0177 of our podcast

Dragon Soul may be available at the following online retailers: