The Freeza’s Force series is a line of three-inch figures that make up the near-entirety of Freeza’s army. The figures have been released in small batches at a time, usually with at least some amount of relevance and connection within individual lines (for example, all Ginyu members). There are four series of five figures each for a total of twenty figures, plus two variations on Freeza’s spaceship (a regular version, and a “Special Color” version).

As the series of figures dug deeper into the trenches from Freeza himself down to Kewi down to Appule (and hilariously down further to even un-named characters), it became a series that I could no longer ignore.

The review of these figures was made possible by your referral purchases on Play-Asia. If you are interested in contributing to the site, please visit our “Donate” page.

As detailed in my review of the Super Vegetto “Dragon Hero” figure, while I have always (very casually) collected figures from all sorts of different lines, I would never consider myself an “expert” in the area. I try to keep up with what the latest lines are and what high-priced products I should be drooling over for the next six months, but as you can imagine and are probably familiar with yourself, it can be incredibly difficult to stay on top of things.

I particularly enjoy the gashapon-style of figures — the sub-$10 (usually ~$5) types that come in little boxes where you may or may not even know which character is inside — due to both the thrill of the surprise, and the fun in arranging them all together.

The Freeza’s Force line is not a standard gashapon line, though. Each box clearly indicates which figure you are purchasing, while at the same time being in that lower price range that makes it accessible to just about everyone.

Each of the four series of figures come in a box that is hued in a slightly different way (such as blue or yellow), which is glued shut at the top. The front of each box has a complete image of the figure superimposed over top an image of Freeza. Along the bottom, the character’s name is listed underneath the specific line within “Freeza’s Force” that it belongs to, along with its individual number. The Freeza’s Force line, like most recent merchandise, is branded with the Dragon Ball Kai name. 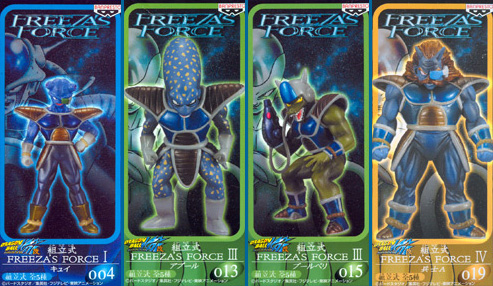 Inside each box, a few small parts of each figure are separated into segmented plastic wrappings. 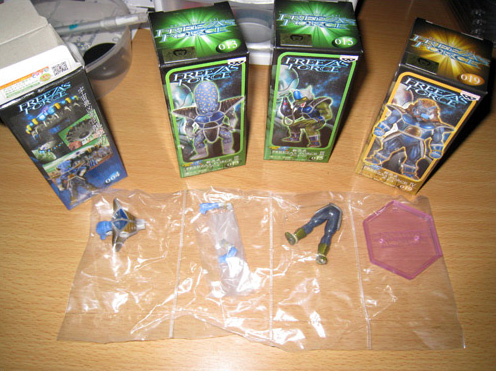 Your shipping and packaging type may vary depending on how and where you pick up a Freeza’s Force series figure.

Depending on the figure, there may be a varying number of pieces to fit together. In the case of Kewi, his two arms fit into his torso, which itself then stacks on top of his legs. The completed figures have little holes on the bottom of each foot that slide into the tabs on the purple base. 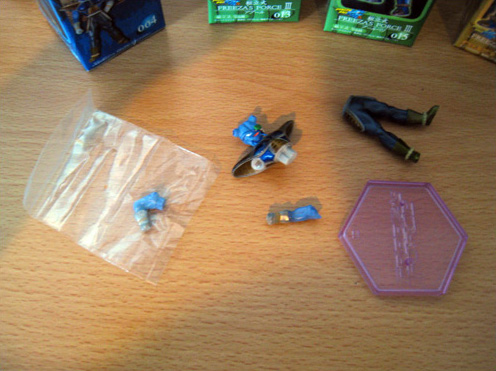 Play-Asia’s promotional images (Appule seen below) are a fairly good representation of their “real life” appearances: 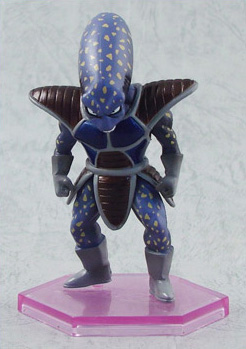 As you can probably tell from the “real-life” photos, the figures are somewhat reflective. There is nothing dull about them — they will liven up the desk space for sure. 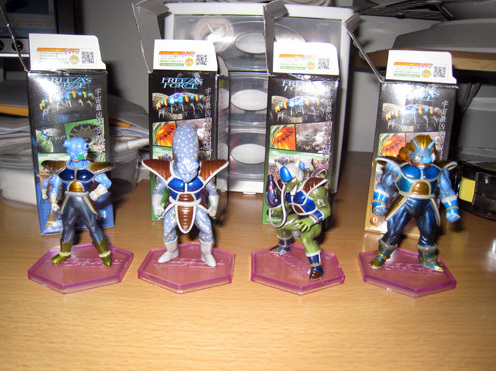 While extremely light, these are very solid PVC figures. Unlike the larger Dragon Hero series we recently reviewed, these figures feel dense. Feel free to slam them into each other as you regress to a six-year-old playing with action figures — you will not cause much damage to them.

>Each of the Freeza’s Force figures are about three inches tall — I say “about” three inches because they do slightly vary from character to character. While Appule stands exactly three inches tall, Buleberi is hunched over to about 2.5 inches tall, while “Soldier A” stands at about 3.5 inches. The width varies depending on the character and their stance, though they do not extend past the width of the two-inch base.

There is no articulation with the Freeza’s Force figures. Once plugged together, the characters stand on their base with no room for any movement. 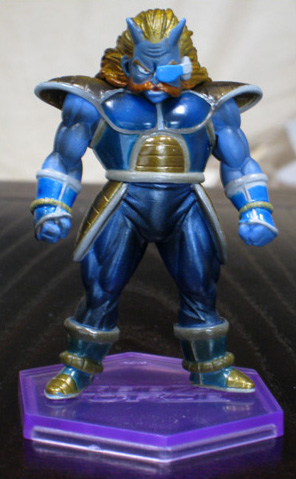 The figures certainly look best from a distance, though they are not remarkably ugly up close. You will see some folded and bleeding paint colors if you hold them up to your face for ridiculous scrutiny, but overall these figures look fantastic for the price.

Although this line certainly scrapes the bottom of the barrel with characters like Appule and even “Soldier A”, both of these characters actually appeared in Dragon Ball Z: Sparking! METEOR for the PlayStation 2 and Wii as playable characters. Where are the notable-nameless such as Oren…?

For the price (somewhere around $5-6), these figures are well worth it for the slightly-“hardcore” fan — obscure characters with moderate detail are always a fun romp. The same price range typically gets you much smaller figures, so a guaranteed character that looks pretty spiffy and stacks nicely at the base with all of his companions makes for a particularly cool arrangement.

The Freeza’s Force figures are currently out of print.