It was not terribly surprising to see a new artist brought on board to perform the main theme for Dragon Ball Z: Battle of Gods. Hironobu Kageyama had always been the main musical voice of the franchise, but an attempt to hit both the older fabase with nostalgia as well as — and perhaps more importantly — a newer one likely necessitated some fresh blood on the production side, too.

FLOW seemed like a good choice. The band was established, talented, and had credibility with the anime crowd for their work on series like Naruto. Things got more interesting when it was announced they would not only be performing a cover of the Dragon Ball Z classic “CHA-LA HEAD-CHA-LA” for the movie, but also an original composition that would be used as an insert song within the movie.

Those who obtained the disc during its first pressing are treated to actual Dragon Ball artwork, while later pressings will have the band (that being FLOW) portrayed with Toriyama-style artwork. As a fan more of the franchise than the band, it was nice to get in while the iron was hot. As with the 20th Century-SONGS BEST release, the character designs all feel just a little off-model. Gohan, in particular, gets the biggest shaft with a strange nose placement and hair that should probably be just a tad bit more puffed-out; there is this strange mix of thick individual hairs yet it all somehow feels as if it is thinning out. Piccolo appears to have been remembered at the last second and hastily placed in a background layer. There is nothing particularly terrible about the cover art, but the whole thing just feels a little “off” and a bit phoned-in. 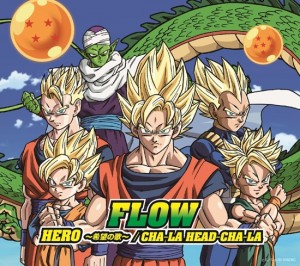 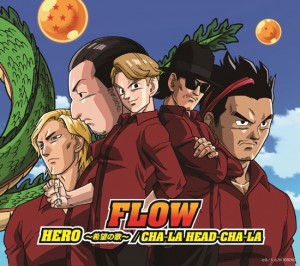 The first pressing of the CD also comes as a digipak case rather than a traditional jewel case. It is a decent stock of cardboard, and the entire package comes in a plastic wrapper with a golden sticker promoting FLOW’s various upcoming releases. 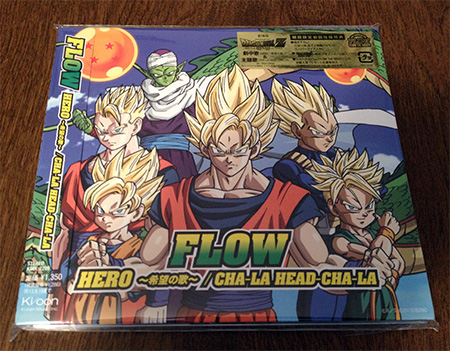 The digipak opens up to reveal the disc inside, along with a slotted front cover that contains a few pamphlets promoting even more FLOW material (such as upcoming concerts and appearances), a black-and-white line art drawing of the CD single’s front cover, and a Dragon Ball Heroes card featuring a variation on the CD single’s cover art. 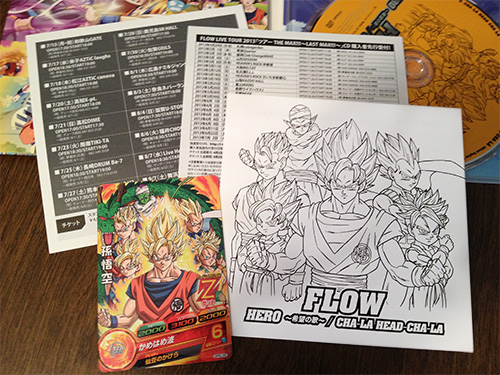 Expectations for the songs were set early on thanks to a Japanese radio preview of the “CHA-LA HEAD-CHA-LA” cover. Does the end result live up to those expectations?

It feels strange reviewing the songs in order from the CD arrangement because we all heard “CHA-LA HEAD-CHA-LA” first, and that in turn shaped our thoughts about “Hero”. Perhaps that was for the best, though.

While “CHA-LA HEAD-CHA-LA” feels like it relies on synthesizers and electronic modulation, “Hero” puts the guitars and raw energy to the forefront above everything else. FLOW prides themselves on “speed” and “energy” in their songs, but it is “Hero” that takes the cake here and may be why the CD single leads with it.

Make no mistake: it is a very “clean” production through-and-through with deliberate quick fades and edits in the mastering, but the intent and enthusiasm comes through in spades. If Hironobu Kageyama is not going to be involved with a particular new song for the franchise, this is what it should sound like to evoke those old feelings and yet still bring it into whatever modern flavor this era and its fans demand.

Speaking of DBZ music nostalgia, the song — thankfully! — gets a nice little guitar solo around the two-minute mark, exactly where fans of older songs like “We Gotta Power” would expect one. It comes in on the short side, but is a nice little touch.

The song rides a nice wave of authentic performances mixed with production values, but one aspect that could have brought even more life to it would have been a deeper bass choice. One of the best examples from the “modern” era of music is the amazing bass in “Super Survivor” (the opening theme to the PlayStation 2 and Nintendo Wii game, Sparking! METEOR). Were “Hero” to get that little bit of extra oomph behind it a la “Super Survivor”, we might have had a true classic on our hands rather than just a great surprise. It is a song that approaches greatness, but gets too scared to just go for it and falls a little short in the end.

FLOW’s aim was to bring their signature sense of speed and energy to the classic tune, “CHA-LA HEAD-CHA-LA“, the first opening theme to the Dragon Ball Z TV series (used between episodes 1-199). They partially succeeded.

As a very casual fan of the band’s work, my first thoughts go to songs like “GO!!!” from the Naruto TV series. There was certainly speed and energy back then, but there was also a heavy emphasis on actual guitars and drums. The band’s cover of “CHA-LA HEAD-CHA-LA” has this, but it becomes overshadowed by the vocal performance modulation and the “twinkly” synth noises in the background. The opening of the second verse gets a wonderfully funky guitar backing the vocals, but it gets swiped away by the rest of the intrusive effects far too quickly.

The whole song feels “safe”. Little bits of extra instrumentation and heavy vocal modulation all seem to be there just for the sake of adding “stuff” to the mix rather than letting the song speak for itself. Were the performance scaled back a tiny bit to just that — a performance — it would probably feel so much more honest and more fleshed-out than it is with all the extra doodads tossed on top of it.

The thing is, even with all of these “negative” points, the song really grows on you. We have had “speed” remixes of the song before, we have had cutesy covers, and we have had all sorts of different jazzy arrangements, so to have a little bit of all of these thrown together into one competent version from a respectable band really isn’t a bad thing at all! Repeat listens even bring more and more out of the song that are hidden away during early listens, so give it a chance. It’s worth the time.

The original version of “Rising Dragon” appeared as the b-side on the “GO!!!” (fourth opening theme to the Naruto TV series) CD single in 2004. It appears to be carried over as a remix here solely based on the word “Dragon” being in its title. In its original incarnation, the much heavier sound fit well for the band at the time, but this updated version with increased electronic noises does at least partially feel at home with the surrounding tracks.

That also means it is still a little bit “out of time” here on the new CD single. With FLOW’s sense of speed being one of the only carryovers from this earlier time (pushing the actual instrumentation into the background), it comes across as nothing more than a filler track before hitting the instrumentals of the more important songs.

It’s almost like each subsequent official English version of the song has to have increasingly incomprehensible lyrics. You’ll be able to pick out a few key phrases (such as the “dinosaur” and “ice”, the “roller coaster”, and “no time to worry”) which at least give the impression that the song is following along with an accurate-enough adaptation, but the rest might as well be gibberish. Some of the original Japanese (“henohenokappa” and “pachi-pachi”) are inexplicably left in, which sure doesn’t help when your ears are already straining to pick out just one language.

It’s a fun little novelty, but when as a non-native speaker you are able to understand the Japanese version more than the English version, there is a little bit of a problem.

That being said, having something more than the obligatory filler middle track (see: “Rising Dragon”) and instrumental/karaoke versions is a welcome addition, and one you might at least revisit for a few good chuckles.

Dragon Ball music superfans should create a playlist order of the English versions by Gino Padilla / Age of Wonder, Highland, Hironobu Kageyama, and wrap it up with the FLOW version. Alternatively, reverse the order but drink heavily throughout your listening session so that your comprehension level versus Engrish delivery flatlines. Fun for the whole family!

Taking the vocals away always give the backing guitars a chance to shine. More so than this in “Hero”, however, are the effects in the choruses. The robotic harmonies are completely obscured by the main vocals in the normal version of the song, so it was a complete shock to hear them at all in the instrumental version. Perhaps the fact that they are so complementary that they are virtually indistinguishable from normal harmonies proves how successful a technique it was?

FLOW’s cover of “CHA-LA HEAD-CHA-LA” felt like a scaled back production in the normal version of the song, so it was no surprise to hear very little extra work happening when the vocals are stripped away. Whereas “Hero” has a bit of the harmony kept in the instrumental version, the backing vocals are completely stripped away over in the main theme’s instrumental, acting at least as a testament to the band’s honest performance in that regard.

We get a lot of cover songs for the franchise, but they are mostly relegated to low-budget compilations by unknown artists; it is not often that we get quality covers. Personal preferences over musical styles aside, there is no denying that a lot of love and effort went into FLOW’s version of “CHA-LA HEAD-CHA-LA”, even if it does feel a little “safe” compared to their previous work. The addition of a strong insert song in “Hero ~Song of Hope~” turns this into a no-brainer for fans of the series.

Go ahead and grab the CD single without much hesitation. The context of how “Hero ~Song of Hope~” is used in Battle of Gods is not super-important, as it comes across as a wonderfully earnest song very much representative of what Dragon Ball truly is (complete with, admittedly, pretty trite lyrics). A fun cover of the first theme song plus a few extras on the disc — and all at a pretty good price! — makes for an easy purchase decision. Not even the Engrish can drag it down!

FLOW’s “HERO ~Song of Hope~ / CHA-LA HEAD-CHA-LA” CD Single may be available at the following retailers: