Takayoshi Tanimoto was announced as the new performer for the opening and ending themes to the then-upcoming “refreshed” version of the Dragon Ball Z TV series, Dragon Ball Kai, in early March 2009. While fans recently had a single exception in the form of Ayumi Hamasaki for Dragon Ball Evolution, Hironobu Kageyama had up until this point still been the performer of all DBZ-related songs, including new music for as recent a release as Infinite World on the PlayStation 2.

How were fans going to react to someone else’s voice singing DB music…? Furthermore, after Kai episode 17 revealed that “Over the Star” is actually an insert song, does that affect the value of the CD in any way?

The review of this CD was made possible by a generous donation from Elliot. If you are interested in contributing to the site, please visit our “Donate” page.

For a good portion of this review’s introduction, you may as well just read my review of the “Dragon Soul” CD single. I had no familiarity with Takayoshi Tanimoto, and was still finding it difficult to accept the fact that a new voice was going to be so closely associated with the images of DBZ.

I, at the time, had decided not to listen to any of Tanimoto’s previous music for fear of dismissing his upcoming work in Kai outright before giving it a fair shot. My first listen would be when the show first premiered on Japanese television (watched live over the Internet), hopefully riding the wave of excitement.

My initial impressions from 05 April 2009 and the first episode of Dragon Ball Kai are slightly different from how I feel about the song, now. I remember riding that wave of excitement and finding the song an appropriate and upbeat conclusion to the new version of the TV series. With only a quick viewing, though, it was difficult to truly form a solid opinion

Before dipping back into the music, let’s examine the CD single release, itself. There are two versions released (a regular and “Limited Edition” version), though the differences are negligible. Retailing for only ¥100 more than the regular version at ¥1300, the “Limited Edition” version contains a special card to be used in the Dragon Battlers arcade game, and an extra slip that surrounds the back of the case promoting this card and its game. 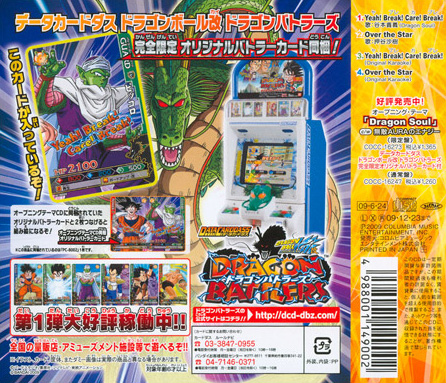 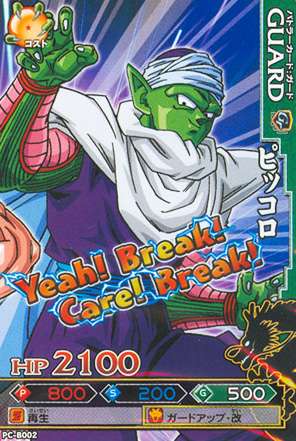 The cover image reflects the carefree nature of the song, with a smiling Goku, Gohan, and Kuririn taking the center stage, with a stoic Piccolo staring off into the distance behind them. Kinto-Un even makes an appearance, serving as the background for the Kai main logo in the upper-right. While the artwork choice is certainly appropriate, it does feel like it is missing something. There is a lack of detail in all of the characters’ faces, and the overall feeling is just “flat”. The song title does a good job of breaking out of the image with a nice splash, however. 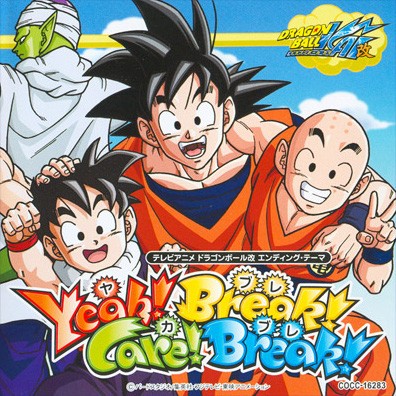 The back cover is a semi-continuation from the front cover, showcasing Tenshinhan, Chiaotzu, Pu’er, Yamcha, and Bulma. Chiaotzu even has the same crazy-colored-in-eyes as seen in the actual animation for the ending theme. Everything is much more legible on this back cover than it was for the Dragon Soul CD single, which was a welcome change. 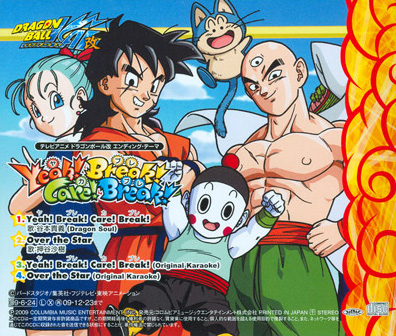 While not quite as unreadable as the Dragon Soul lyrics, the Yeah! Break! Care! Break! lyrics also suffer from the single-color layout. The sprinkling of Dragon Balls is a nice touch, but it is otherwise an incredibly bare-bones inside-cover; there are no additional pages.

The highlight of the cover/insert is probably the fact that it folds out into a full-scale image of the front and back covers. No strange, red clouds get in the way of the group shot.

This brings us to “Yeah! Break! Care! Break!” being a (stretch of a) play on ヤブレカブレ yabure kabure, which roughly means “utter desperation”. While that may play into quite a few scenarios throughout the DBZ series, does it make sense in the context of this song and its performance? Read on.

The opening of the song, which is different from the broadcast version, could not possibly come across as any more generic of a para-para-styled dance song. I was immediately taken aback by it, but this part is so short that it does not really affect the overall impression of the song.

The auto-tuned dual-vocals kick into high gear almost immediately. I personally cannot stand this vocal effect, so with a weak opening in terms of both instrumentality and vocal delivery, the song had a lot of catching-up to do in my mind. Thankfully, the general verse delivery does not abuse this effect, and even the choruses tone in down and only abuse it on certain lines.

Takayoshi Tanimoto’s vocals fit the style of the song just as well as in “Dragon Soul”, despite being an entirely different type of song. In fact, this type of music suits him better than the opening theme does. The lyrics continue to be (mostly) clearly enunciated, making it easy to follow along. Unfortunately, there is not much else to say about the delivery. It’s just there. He’s singing the song. Not once did I ever stop and think that a particular line was especially powerful, sing-along catchy, or even remotely interesting. Do not misunderstand — Tanimoto’s performance is not bad… it just does little more than exist.

Unfortunately, that is my overall feeling about the song as a whole. It does everything perfectly adequately, or to quote Oolong from an old fansub of DBZ Movie 7, it certainly does its “moderate best”. Nothing stands out; the backing music, the vocals, the lyrics… yep, it’s a song. What else can you really say about it?

I do not dislike the song. In fact, I think it works wonderfully as the minute-and-a-half version broadcast at the end of an actual episode of Kai. Pushing the four-minute mark as a complete version, though? It is very close to overstaying its welcome. Personally, it seems to me as if the song is in a state of “utter desperation” to remain relevant.

With “Dragon Soul” getting an image song as its b-side, we anticipated the same from the ending theme’s CD single. In fact, that is exactly what we thought we got… until episode 17 of Kai aired with “Over the Star” as an insert song. With that in mind, we can take the song on two levels: how does it work as a stand-alone song, and how does its inclusion in the series affect one’s perception of it?

As a stand-alone song, it actually ends up being one of my favorite image songs in recent years. Everything from the random extra songs on the Super Survivor CD to the Inazuma Challenger CD have been fairly forgettable to me; “Over the Star” brings me back to the YUKA and KŪKO days of beautiful image songs from the various “Hit Song Collection” releases in the 1990s. Sako Oshitani does an admirable job of delivering those soft vocals with a heartfelt emotion behind them.

Oshitani and the music do each other justice and get out of each other’s way when necessary. Neither is overpowering, and the gorgeous musical breakdown near the middle gives the song room to breath. While we get the terrible cliché key-change near the end for one final chorus, it somehow feels appropriate here.

As an image song, “Over the Star” works incredibly well. The pacing up to the scene is slightly interrupted by a commercial break, but it recovers beautifully and slowly makes its way into the song as the heroes recover the bodies of their fallen comrades. It is actually quite powerful, and one of the few instances where Kai maybe… just maybe… does something better than the original broadcast version.

Unlike “Muteki AURA no Enaji” from the opening theme’s CD single, “Over the Star” genuinely stuck with me and was a song I returned to a few times. It is tough to say whether or not I will return to it over the next few years, but its status as an actual insert song certainly helps its chances.

Could it be possible that I prefer the karaoke version of the song over the original? Since I was having such a difficult time enjoying the vocal performance, it makes sense that I enjoy this version of the song over the original. It works quite well as an instrumental-only song (even with some of the backing vocals break in here and there). It would be great to work more versions of this song as an instrumental into the score of Kai.

Beyond that… there is not much to say about it. It is a karaoke version of a song that I only moderately like. Yay?

Track 4: “Over the Star” (Original Karaoke)

With a slower piano version of the song being a part of the actual Kai score, it makes sense that “Over the Star” is more versatile than the closing theme. It works amazingly as a vocal song, and also works perfectly as a karaoke version.

The acoustic guitar work gets a chance to shine a little more than it does in the vocal version. There are few backing vocals, proving Oshitani’s talent in the delivering the lyrics in the original vocal version, as well.

It is just a simple karaoke version of a song, but saying that alone is certainly selling it short.

It is always difficult to come up with a logical recommendation to purchase or not to purchase a CD single. In the grand scheme of merchandise, they are extremely cheap; on the other hand, ordering just one of them usually results in shipping that costs nearly as much as the item, itself.

From my perspective, I am glad I picked it up. While “Yeah! Break! Care! Break!” itself is certainly not one of my favorite songs and I do have many issues with it, I occasionally find myself popping it into a playlist of other Dragon Ball-related songs. In that respect, I can justify the purchase and its worth. When you toss an insert song into the mix, it helps firm up the decision even more.

As always if you are going to be ordering other stuff anyway, go ahead and toss this into the mix. With the upcoming Kai soundtrack (at least volume one) only having TV-sized versions of the opening and ending themes, this is your only place to get the full-length version for now.

For another look at this CD single with samples from each song, check out Episode #0181 of our podcast.

Yeah! Break! Care! Break! may be available at the following retailers: