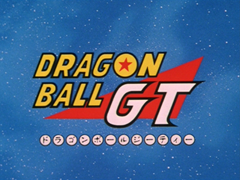 Usage: Dragon Ball GT Episodes 01-26
The first of the series’ opening animations draws its inspiration from the first story arc of the TV series, even though it was ultimately used for the majority of the series. The animation follows Goku, Trunks, and Pan’s various early adventures into space in search of the seven Black Star Dragon Balls which have been scattered across the universe.

Usage: Dragon Ball GT Episodes 27-64
The second opening animation used for the TV series was slightly modified version of the first TV series animation. The only changes occur at the end of the opening, with Baby appearing to attack as Goku transforms into Super Saiyan 4 and unleashes a Kamehameha. This new opening animation coincides with Baby’s appearance on Earth, as he begins to infect the Saiyans.

The use of “Bit by Bit, You’re Charming My Heart” as the ending theme in the 10th Anniversary Movie was the first time the theme was used outside of the Dragon Ball GT TV series. However, the ending animation for this movie was pretty straight-forward — the credits scroll up along the right, while still images of characters from the movie are shown in the background.

« Previous Opening
Theme Guide / Opening Themes
Next Opening »
Connect With Us
Support Us
Your support for Kanzenshuu is what keeps us going. You can help by donating to us directly, or by shopping online at certain retailers through our affiliate links below. Every bit counts and helps contribute to our server fees and bringing you new site content, reviews, and contest items.