After the original serialization of the Dragon Ball manga, the animation team moved onward to Dragon Ball GT. Since then, various other stories have been told as comics and animated features, while other “stories” have been “told” as little more than anecdotes via interviews and guide book inclusions.

The purpose of this tidbit-filled mini-guide is to break down some of these fascinating details as they relate to the ultimate fates of certain Dragon Ball characters. Many of these come from original author Akira Toriyama himself, while others are simply thoughts and ponderings from other producers and staff members.

Detailed explanations of character fates that tell a complete story, such as manga-based or animated features like Episode of Bardock, will not be included.

In one of the earliest guide books for the franchise — the Adventure Special from 1987 — Akira Toriyama is asked what happened to the nefarious Rabbit Gang once the moon is destroyed by Jackie Chun (during the 21st Tenka’ichi Budōkai). Toriyama simply responded:

In the same Q&A from the Adventure Special, Toriyama is asked what happened to Tsuru-Sen’nin, the crane hermit, after he was sent flying by Kame-Sen’nin’s Kamehameha. Toriyama responded:

He’s probably out in the desert or somewhere secretly awaiting his chance for revenge, I guess. 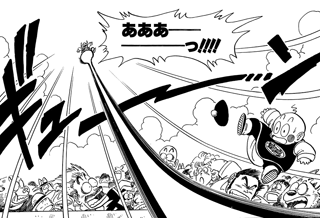 Much later on, the question of what happened to Tsuru-Sen’nin — this time alongside his brother Tao Pai-pai — is brought up again in 2004’s second kanzenban-based guide book, Dragon Ball Forever. Toriyama responded:

Ye~ah… they got mixed up in something or other and died, but they were bad people, so perhaps they weren’t restored to life…

Somewhat famously “forgotten” about (but not necessarily by who you think may have forgotten about her), poor Lunch never really seems to catch a break. Toriyama is asked about her in the same Q&A from Dragon Ball Forever, and specifically if she ever got to meet up with Tenshinhan again. Toriyama, in a rather noncommittal fashion, responded:

I wonder… Tenshinhan gave Lunch the cold shoulder, but she tenaciously persisted, and ultimately they were together! Couldn’t that be it? (laughs)

Continuing onward in the same Q&A from Dragon Ball Forever, Toriyama is asked if Yamcha was able to become happy. Toriyama responded, implying that Yamcha had perpetual bad luck with women:

Years later, as part of the hype-train build-up to the new film Dragon Ball Z: Battle of Gods, Fuji TV’s Mandō Kobayashi provided a series of questions to Akira Toriyama who responded in text for the 24 March 2013 episode. Kendō Kobayashi specifically asked for epilogue information about Yamcha, Tenshinhan, and Chiaotzu. For Yamcha, Toriyama responded:

Like you, KenKoba, he has the dilemma of loving women but not being good around them, so he is still wandering blindly in search of the ideal partner he won’t be nervous around. He’s even worked in a host club, but because of his nervousness, it didn’t go well and he was fired. His livelihood is mainly working together with Pu’er as a freelance bodyguard, but he occasionally goes to Tenshinhan’s to help with the farm, as well.

In the same response for Mandō Kobayashi, Toriyama provided the following story for Tenshinhan (and by extension Lunch), which pretty much keeps in line with what he hinted at — or at least seemed to hope for! — many years earlier in the Dragon Ball Forever Q&A:

Stoic Tenshinhan mainly does farming in addition to his training. He can split into multiple bodies and grow extra arms, so harvesting the crops goes quickly. He was found by Lunch, who fell in love with him at first sight and had been constantly pursuing his whereabouts, and even reluctantly lived together with her; but she wasn’t cut out for farming, and Tenshinhan has no interest in romance, so she left after just a few days. After that, it seems Lunch apparently stops in from time to time.

Wrapping up the trio of characters in his response for Mandō Kobayashi, Toriyama noted for Chiaotzu:

Naturally, he helps out with farming together with Tenshinhan, but his work utilizing his telekinetic powers has a reputation for its efficiency, and he is hired at an expensive rate by farmers nearby, so he apparently has a surprisingly large amount of money saved away.

Poor Lunch was further tossed aside in the manga when Toriyama erased her out of a cameo and instead replaced her with Artificial Human #17. In this scene, #17 is shown out and about with a shotgun. This scene is expanded upon in the TV adaptation with #17 “holding up” a couple guys, effectively making them raise their hands in the air to donate their energy to Son Goku’s Genki-Dama. 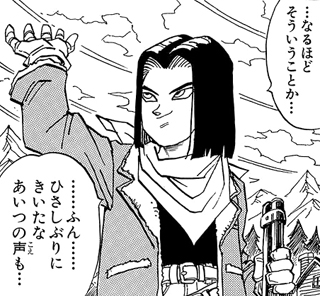 This “fate” was expanded upon many years later in a Q&A as a part of the “Full Color” release of the Cell arc manga in 2014. In the sixth Cell arc volume specifically, in addition to revealing the “real names” for both #17 and #18, Toriyama notes about #17:

He works in the wildlife preserve area of a gigantic royal nature park, as an outstanding guard who doesn’t hold back against poachers.

It’s an ideal job for #17, who loves to be on his own and isn’t big on cooperating with others; since he’s so good at his job, he takes in a high salary. He’s married to a zoologist; they have one child and two adopted children, and live happily in an isolated house inside the nature park.

He went and met #18 and Kuririn one time, but didn’t talk about what he’d been up to, maybe because he considers such a wholesome lifestyle embarrassing.

The first of Jump’s “Gold Selection” Dragon Ball Z Anime Special magazines was released in 1989, right as the Freeza arc was beginning its serialization in Weekly Shōnen Jump. The magazine featured a comic drawn by Akira Toriyama that detailed his involvement with the TV adaptation as well as the way in which he created the manga. 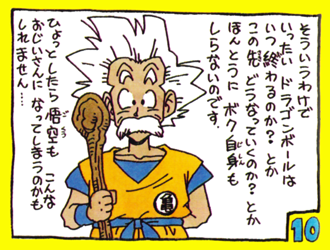 He discussed how he generally just drew whatever he wanted in Dragon Ball, saying:

Because of this, even I really don’t know just when the heck Dragon Ball will end, or what’s going to happen up ahead. Maybe I’ll even turn Goku into a geezer like this…

As Dragon Ball GT came to a close, a second and final volume of the Perfect File guide book series was released. In it, voice actress Masako Nozawa noted, regarding the recording of the final episode:

The scene where, after Goku finishes fighting, he rides on Shenlong, and says, “Shenlong’s back sure is warm…”. That’s because riding on Shenlong means that Goku’s going to leave this world, and go to the world of the gods…. I was glad that they didn’t write it plainly that he died, though…. I feel that Goku probably went to Shenlong’s place, and is training again. 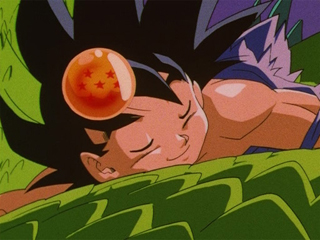 The matter of what exactly happens to Goku — or, more appropriately — where he goes, in the subject of a larger discussion which is outlined on its own page here in our “Tidbits” section.

As a part of the official timeline for the now-defunct Korean MMO Dragon Ball Online, the story noted that in AGE 801 (which would place it 17 years after AGE 784 where the original manga ends with the 28th Tenka’ichi Budōkai and Goku’s departure with Oob):

Realizing his death is imminent, Goku, who wanted to settle their rivalry, left the Earth with Vegeta. Years later, a supernova explosion was detected; perhaps caused by Son Goku and Vegeta’s battle.