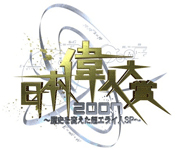 It is a beautiful day in Japan, and a huge audience has gathered to witness “The First Strongest Hero Fighting Tournament”. Masaharu Miyake is ready to begin the tournament, but is waiting for a special guest to arrive, when all of a sudden Miyake spots something off in the distance. Son Goku appears riding on Kinto-Un and he jumps off, landing in the arena. After a quick jab and a kick, he is ready to take on all his strong opponents. Miyake tells Goku that he has been brought in to commentate, not fight. Goku is disappointed, but decides that is fine with him, as long as there are strong people in the tournament.

Musashibo Benkei enters the ring, and Goku cannot believe how big he is. His opponent will be Himiko, queen of The Yama Kingdom. The match begins and Benkei attacks first, with his “1,000 Sword Snatch Slash”. He hurls the 1,000 swords at Himiko, who counters with her “1,000 Servants”. The servants fend off the 1,000 swords, but Benkei sends the servants flying with his “Rock Crack: Strong Arm Slap”. Himiko is defenseless, and Benkei shoots her with a beam, knocking her unconscious. Miyake declares Benkei the winner of the first match.

Shōtoku Taishi enters the ring and Goku notes that he is the guy on the Japanese money. The much younger Amakusa Shirō makes his way to the ring, and the match begins. Amakusa begins mocking Shōtoku-sama as a genius, telling him that he will win because he is smarter. He begins speaking in other languages, saying that only he can understand words he has never heard before, unlike Shōtoku-sama. Shōtoku’s ears suddenly become very large, which allows him to listen to peoples’ conversations from around the world and understand them.

The two face off again, but this time with a battle of might, rather than whit. Amakusa uses his Kaijō Sōkō to run on the sea as if it was land, but Shōtoku uses Kūchū Hikō to fly and catch up with him on the water. Shōtoku lands on top of Amakusa, and drowns him in the sea. Miyake declares Shōtoku the winner of the second match.

Goku cannot believe how strong all of the contestants are, and thinks that Piccolo and Vegeta would probably have a tough time fighting them. Miyake asks Goku about the Dragon Ball DVDs coming out this month, but Goku had forgotten about that. He grabs the microphone and gives a quick plug for the Dragon Ball DVD individual discs. “Please buy them!”

Musashibo Benkei and Shōtoku Taishi, the winners of the first two matches, enter the ring. Benkei pulls out a naginata and begins swinging it at Shōtoku but cannot manage to land a blow. Goku is impressed at how fast Shōtoku-sama is moving to dodge Benkei’s attacks. Shōtoku is glad he is impressed, and says he is using Shunkan Idō (teleportation). Benkei senses where Shōtoku will appear again and hits a rock in that direction, which hits him as he re-appears. Benkei takes the opportunity to use his “Rock Breaking Hip Drop”, and lands right on top of Shōtoku.

Benkei gets up and they check to see if Shōtoku is unconscious, but then Goku hears something. The noise gets louder, and everyone realizes that it is Shōtoku laughing. Benkei does not know what is going on, since Shōtoku’s body is not even moving. Shōtoku-sama appears, having used his “Spirit Ball Evasion” to evade Benkei’s hip drop attack. Benkei cannot believe it and he tries to hit Shōtoku, but instead gets hit in the shin himself. Benkei starts hopping around in pain, then suddenly stops moving. Benkei dies standing up, and Shōtoku is declared the champion.

Miyake-san is a sports announcer for the Fuji Television Network. He is typically a commentator for such sports as baseball, martial arts, Formula One, and volleyball.

Son Goku returns to Fuji TV as a guest commentator for the 2007 Japan Hero Awards. He was under the impression that he would be competing, but is more than willing to assume his role as a commentator high above the ring on Kinto-Un. Halfway through the broadcast, Goku takes the opportunity to plug the sale of the “Dragon Ball DVD Individual Discs“.

Himiko (卑弥呼)
Himiko was the female ruler of an early pre-Japan political region known as Wa, which was believed to have existed either in the Yamato region or northern Kyushu of modern-day Japan. Many Japanese texts omit her from their history, but she is mentioned in both Chinese and Korean histories. The first historical record of Himiko are found in a Chinese classic text, the “Records of Three Kingdoms”, which provides details of the relations between Queen Himiko and the Cao Wei Kingdom, and Himiko’s rise to the throne.

Shōtoku Taishi (聖徳太子)
Shōtoku Taishi was a Japanese ruler, who is largely credited with the introduction of Buddhism and the Chinese-style political and legal organization to Japan. His legendary wisdom and far-sightedness, as well as peaceful foreign policy with Japan’s neighbors has kept him in high esteem. As reference in the special program, his likeness can be found on Japanese ¥10,000 banknotes, the highest denomination banknote.

Amakusa Shirō (天草四郎)
Amakusa Shirō was a leader of the Shimabara Rebellion, a failed uprising of mostly-Christian peasants against the Tokugawa Shogunate. Amakusa led the defense of Hara Castle, but died when it fell. His head was displayed on a pike in Nagasaki for a very long time afterward as a warning to any other potential Christian rebels.

The techniques and attacks used throughout this historical special are based on Japanese legend and mythology. The special refers to them as “superhuman moves”, which are outlined below:

Produced In Cooperation With

Tidbits
Connect With Us
Support Us
Your support for Kanzenshuu is what keeps us going. You can help by donating to us directly, or by shopping online at certain retailers through our affiliate links below. Every bit counts and helps contribute to our server fees and bringing you new site content, reviews, and contest items.