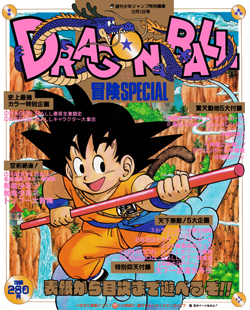 A Full-Coverage Q&A With Toriyama!!

Is That So?! The Dragon Balls

We asked “Tori-sa”, a.k.a. Akira Toriyama-sensei, a ton of questions about Dragon Ball, about himself, and about manga. Frankly, we probably went overboard! Will the secrets of Dragon Ball now be revealed?!

Birthplace: Aichi Prefecture.
Birthdate and Zodiac Sign: 05 April, Shōwa 30 [1955]. Aries.
Height, Weight, Blood Type: 174 cm, 68 kg, A.
School: Aichi Prefectural Okoshi Technical High School, Design Course
Family Composition: My father, my mother, my wife, my son, and me. Then I have a cat (named Koge), a dog, and two birds.
Hobbies: Motorbikes. Cars. Reading (magazines). Building models. Going around to different supermarkets.
Eyesight: 0.1 [20/200 or 6/60; just able to read the largest letters on the eye chart] in both eyes.
Favorite and Least Favorite Colors: I like yellow. I hate purple.
Favorite and Least Favorite Foods: I like pork cutlets and curry, so I guess cutlets with curry is my favorite. I hate pumpkin.
Favorite Sports: I play baseball and table tennis. I watch golf.
Favorite Professional Baseball Team: The Chūnichi Dragons, when they’re in good form.
Favorite and Least Favorite Animals: I hate rats/mice [the same word in Japanese], but I like all other animals.
Favorite Word: Raku [“comfort, ease”; this is incidentally the same kanji Yamcha wears, as discussed above]
Favorite Music: Anything as long as it’s not sung in Japanese.
Motorbike(s) you ride currently A CBR400F and a custom Silk Road [both made by Honda].
Number One Favorite Movie: Witness with John Book [a 1985 film in which Harrison Ford plays a character named “John Book”]
Favorite Animation: Nausicaä of the Valley of the Wind and Night on the Galactic Railroad.
Bad Habit: Picking my ears.
Someone You Respect: I occasionally respect myself.
Favorite and Least Favorite Subjects in School: I liked arts and crafts. There wasn’t any particular subject I disliked.
Your Good Points and Bad Points: A good aspect of me is that I’m not too particular about things. A bad aspect is that I’m indecisive.

Manga Corner
What manga artist is your favorite?
Rather than being my “favorite”, I think Katsuhiro Ōtomo is incredible.
What’s your number one favorite manga?
Astro Boy. There used to be this magazine called Shōnen, and I liked practically every manga that ran in it. Lately “Oishinbo” and “Bari-Bari Densetsu” have been interesting.
What kind of paper do you draw manga on?
Cheap, ordinary Kent paper.
What kind of pen do you always use?
A G-Pen. Made by Zebra.
If Goku and Arale fought, who do you think would win?
I guess Arale’s probably stronger.
What was your main impression the first time you met your editor, Torishima-san?
I wondered if it was really OK for him to come into work wearing that kind of clothing. I figured that a top editor at Shueisha would have to wear a suit.
What kind of person is Torishima-san?
He’s a guy who doesn’t hide anything. But this also means he’ll tell me whatever he wants to say. I think he suits me. People who hold things in are hard for me to read, so it wouldn’t be any good.
Do you think Torishima-san has his sights on world domination?2
He’s probably not aiming for world domination, but I’d say he’s definitely aiming to dominate something.
If you should become a manga artist in your next incarnation, what kind of editor would you like to have?
Someone who won’t reject my ideas would be nice.
What do you think Dr. Mashirito is doing now?
I think he’s still plotting something. Thinking up some way or other to rule the world even though he’s been reduced to a single bolt3.
Why did you become a manga artist?
At first for the money. I’d quit my job and didn’t have anything to do, and it just so happened that Jump was taking manga submissions, so I tried sending something in. After that it was determination.
At what age did you start drawing manga?
If it’s just doodling you’re talking about, then as far back as preschool. But it wasn’t until I applied to Jump that I first completed an actual work, when I was about 23….
What do you think is most needed to become a manga artist?
Frankly, I think you need good taste. There’s many parts of the job where effort alone can’t get you through. That’s why I think someone who tries hard but hasn’t got taste won’t get as far as someone who’s maybe not as skilled but has good taste.
When do you think up the compositions for your manga?
Typically I don’t think up anything at all, and Torishima-san will call and ask me if I’ve decided on the story yet. When he asks me that, something will pop up in my mind in a flash.
What would you do if your son Sasuke-kun said he wanted to become a manga artist in the future?
It’d probably bug me, but if that’s what he wanted I guess there’d be nothing I could do.
What sort of manga do you want to draw after this?
Let’s see… maybe a five-page serialized manga would be good.
The following translator notes are included for the benefit of the reader as supplemental information.
1 The Nansō Satomi Hakkenden is a 19th-century epic novel the author Kyokutei Bakin. It tells of the exploits of eight samurai half-brothers, all descended from a dog. Each of them was born with a crystal orb, which Toriyama is referencing here.

2 This is a reference to Dr. Mashirito, the villainous parody of Akira Toriyama’s first editor Kazuhiko Torishima created for Dr. Slump. Mashirito is obsessed with world domination.

3 After being defeated by Arale and co. numerous times over the course of Dr. Slump, Dr. Mashirito turns himself into a robot. But in a final battle he’s blasted to smithereens, reducing his body to a single nut and bolt.