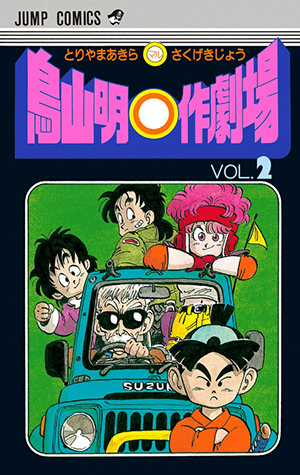 “This is How I Became a Cartoonist”

“This is How I Became a Cartoonist” Part 1
Back before I entered primary school, I liked to draw, even though I was a brat. I especially liked animals and vehicles, and I drew that sort of thing constantly. Then one day, I saw the animated Disney film One Hundred and One Dalmatians. It was so amazing. I practically flew out of my seat. Young Toriyama thought to himself, “It’d be nice if I could draw that well, too~”, and got even further into drawing.
“This is How I Became a Cartoonist” Part 2
Young Toriyama was still as much of a brat as ever after entering primary school. Every day he was naughty and played around until it got dark, and then at home, he did nothing but draw. One day, when he went to a female friend’s house (even then, he was only nice to girls), there were a lot of comic books lying around, which she said were her older brother’s. Once again, I practically hit the ceiling. To think that there were books like this. And then when I went to a house in the neighborhood that had a TV and watched it for the first time, I hit the ceiling. Every day was filled with excitement for Young Toriyama.
“This is How I Became a Cartoonist” Part 3
In spite of being so absorbed in comics when I was in primary school, for whatever reason, I stopped reading them that much once I started junior high. I think it’s probably because I got caught up in movies and TV. But I still liked drawing as much as ever, and my textbooks and notebooks were filled with doodles. Even so, it was an era that was full of energy; there were few kids who did stuff like go to cram school, and everybody played around outside until the sun set. But everyone grew up to be proper, fine adults.
“This is How I Became a Cartoonist” Part 4
Since I liked to draw, I entered a design-oriented high school. I liked to draw as much as ever, but I liked having fun even more. On the way home from school, I’d stop by toy stores, ramen shops, and department stores, go bowling, or play pool. At any rate, I never went straight home.

I almost never bothered to read comics, but I’d draw them every so often.

Then, as my graduation grew closer, came the diverging paths of college or work. Although my parents were against it, I chose work without hesitation. I was already sick of studying, and I was sure that with my drawings, I would get by in practice. I was such a cheeky brat.

“This is How I Became a Cartoonist” Part 5
I was one of the more talented ones at the design firm I joined, so I conducted my work pretty shrewdly. Except I wasn’t a morning person, so I was quite frequently late for work. On top of that, it was a fairly big company, they were fussy about the dress code, and I got chewed out quite often. In short, I had problems as a member of the workforce. In the end, I came to hate my job, and I quit after about two and a half years. But looking back on it now, I came to know at least a little bit of how the world works, so it wasn’t a waste. If one were to go straight from the student to the cartoonist, that sort of thing would be hard to understand, no matter what.
“This is How I Became a Cartoonist” Part 6
Having quit my job without any sort of plan, I had a problem. Even if I wanted to have fun, I had no money with which to do it. But then one day, I found an article about a comic contest in a comic book that was lying around at a café! I wanted that prize money, no matter what. So I set about drawing my first proper comic. Brimming with confidence, I sent it in, only for it to be left out of the winners’ circle altogether. Poof, no prize money. It was a shock to me, but it also ticked me off. Out of spite, I immediately drew another comic and sent it in. Except this one was rejected as well. But then the phone rang, and it was from an angel. “You’re still in rough shape, but you might get somewhere, so keep drawing and send it in.”

It was Torishima, from the editorial department.

And so, I kept sending them in with all my effort, and after a while, I finally made my debut! And with that in mind, I still owe a great debt to Torishima.