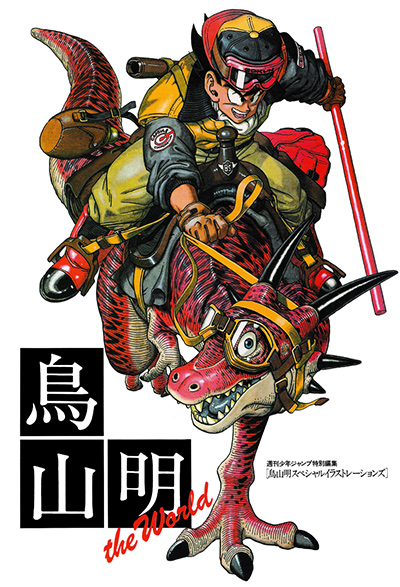 Akira Toriyama:
The father of characters receiving overwhelming support, such as Arale from Dr. Slump and Son Goku from Dragon Ball

Osamu Akimoto:
Currently serialized in Weekly Shōnen Jump with This is the Police Station in Front of Kameari Park in Katsushika Ward. The character of Kankichi Ryōtsu, a.k.a. Ryō-san, is intense.

Toriyama-san, Akimoto-san, what we’d really like to ask the two of you is the point of what sort of concept your characters come to be born from. Right now especially, with so many comics without strong characters, how were characters like Goku and Ryō-san born…?
Toriyama: Akimoto-san, how many years has your series been going on?

Toriyama: What sort of place did the character of Ryō-san come from?

Akimoto: It really wasn’t something I tried to create; it was a competition entry, so I didn’t have an editor, and I just drew whatever I wanted. I didn’t give any thought to things like making the characters stand out. It wasn’t until four or five years after I started working on it that there was talk about the characters standing out, etc. etc.

Toriyama: So, you didn’t set out at first to write a story about a weird policeman….

Akimoto: Right. Rather, I just thought I’d bring out this un-policemanlike policeman. After that, one-shots and such that I created giving real thought to the characters often ended up being failures. On the contrary, when I just put something out there, they’d unexpectedly just start hitting their stride of their own accord. It’s all happenstance, really.

Toriyama: Arale entirely just happened to come together, too, in my case.

Akimoto: There’s something pretty difficult about deliberately trying to come up with characters. So there’s aspect comes out where you just create it as you write. All you need is one thing, as with a character like Rambo[*1], who’s strong under the worst circumstances. And then, as you’re doing it, the character of Rambo comes out, and it’s like he starts to stand up on his own.

What about the supporting characters?
Akimoto: I suppose you could say that they have to be as separate from the main character as possible, or rather, contrasting characters are the easiest to get to move. Ryō is strong and and heavy-handed, so someone who’s weaker-willed, or someone good-natured…. But that’s because I’ve brought out a lot of characters up to now. Coming up with various costumes, or completely different motifs, as Toriyama-san does, would really expand the horizons, though. Because in real life, that’s the only thing you can come out with.

Toriyama: Recently, I’ve oddly being doing things more on the story side than the gags; I suppose you could say I’ve gotten into a bind, or rather, it’s become a comic of escalation, so in a way it’s pretty tough. In my case, when it comes to the enemies of the protagonist, I have to make them a different type from the previous villains. But it’s hard. I can’t come up with anything completely new.

Akimoto: When it comes to the protagonist’s rival, on the other hand, the concepts you can make are unlimited, so that might be hard too. In my case, I sort of have them move together with the main character, so as long as I have the protagonist, I can make it work.

Toriyama: Ryō-san is extremely idiosyncratic, or rather, he has his own flavor, so I think it’s nice that you have this one pillar supporting the whole thing. On that point, Goku is the type who wouldn’t talk if there were a lot of people around, so if I put out too strong a character, he could get upstaged. So I try to write him to be as much of a lone-wolf sort as possible.

So do you draw a lot of sketches, then, when you’re coming out with a new character?
Toriyama: I think them up to an extent in my head, then draw sketches of the ones I like, but no matter what I do they end up looking pretty similar. Although in terms of art style, I think I have a sort of quirk that’s a bit different from other people.
Speaking of art style, Toriyama-san, in your case, both the characters and the vehicles are deformed in proportions, and that is incredibly attractive. Is that a calculated move on your part, then?
Toriyama: No, or rather, I like the deformed style, and it’s tough to draw something in its original form while looking at resource materials, so I do it that way, or I come up with it myself. You must have it rough, Akimoto-san.

Akimoto: No, because I just do it that way. In the end, with deformed art, if you have no idea how to do it, even a car might just become this thing with four wheels, but with you, Toriyama-san, you like that sort of mechanical stuff, so I get the sense that it just naturally comes easily to you. I think it’s because you draw them with this easy and free concept, so it’s not forced, and it feels like it could really move.

Toriyama: It’s important that it be something you like. Even if they draw the same things, a difference will come out between someone who likes what they’re drawing, versus someone who hates it, or someone who has no interest.

Toriyama-san, you apparently had an interest in Disney animation as a child, and traced the drawings every day. What about you, Akimoto-san?
Akimoto: The one I drew because I liked it— it’s old, but it’s this character called “Hinomaru-kun“.[*2] Maybe you don’t know it.

Akimoto: I think kids get into it through rounded drawings, or rather, ones with a gentle feeling about them. I think that’s also why Fujio Fujiko-san2 will always be loved.

Toriyama: And on the other hand, I really don’t know how kids who got into it through gekiga3 would end up.

Lastly, if you have any advice on the point of characters for those who would like to start drawing comics in the future….
Toriyama: It depends on what kind of work you want to write. If you’re doing gags, I think it’s important to have characters who are as strong-willed and impactful as possible. There are probably also people who want to draw more subdued contents as well.

Akimoto: Depending on the genre, there are different types of characters that are suitable, and there’s a balance between the work that person wants to draw and their drawing ability. Really, the most expedient thing is to draw something like the characters you yourself like from comics that are already out there, and as you go along imitating, it sort of starts to become your own thing….

Toriyama: I think first it starts with doing caricatures, though. Rather than deliberately trying to draw something, use something you yourself like and want to draw, and I think the characters that come out of that will really have their own individuality.

*1 Rambo: The protagonist of the 1982 American movie Rambo. A former Green Beret returned from Vietnam, whose anger boils over at his unjust treatment. One of Sylvester Stallone’s signature roles.
*2 Hinomaru-kun: By Akira Ōtomo. The main character of the comic Hinomaru-kun, which ran from April 1958 to December 1963 in Shueisha’s Hinomaru. A rambunctious adventure-boy and inventor.
*3 Astro Boy: The protagonist of Osamu Tezuka’s incredibly famous comic Astro Boy. A robot with 100,000 horsepower, who fights for world peace.

The following translator notes are included for the benefit of the reader as supplemental information and were not originally published in the book.
1 1976

2 The pseudonymous duo behind Doraemon, made up of Moto’o Abiko, a.k.a. Fujio Fujiko A, and Hiroshi Fujimoto, a.k.a. Fujio F. Fujiko
3 A genre of Japanese comics that distinguished itself with a more detailed, angular style and dramatic, film-influenced framing, in contrast to the simpler and rounder style of the day.