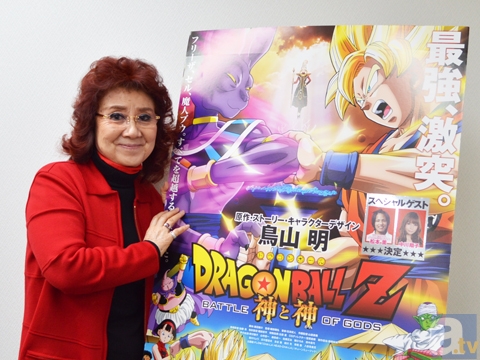 The legendary masterpiece Dragon Ball, which has attracted people across generations and borders since its serialization in Weekly Shōnen Jump began in 1984, returns to the screen for the first time in 17 years with an original new story! Masako Nozawa-san, who plays the lead, shared with us the situation in the studio and her thoughts about the new work.

■ Even after the series ended, she has lived the last 17 years with Goku

How was it playing Goku for the first time in 17 years, since the final movie back in 1996?
It didn’t feel like it had been that long. Even after the series ended, I’ve played Goku in games and such, so I’ve constantly lived my life with Goku. But, when I heard that this time would be a theatrical release, I thought, “All right!” It’s been a long time since I was able to meet up with everyone at the theater.
It feels like you are always living with Goku, Nozawa-san. Was there anything different about playing Goku in the film?
Playing him is the same in both games and movies. Goku is Goku. But, in people being able to see him on the big screen at the theater, I did feel a special significance. First of all, the size shown on the screen is different, you know? At the theater, there is an absolute size that the studio just can’t compete with.
I imagine you met with everyone in the cast for the first time in a while; out of the things you talked about, was there anything that left an impression?
It was split between [cast] members I’m able to meet with often, and those, not so much, and those who I hadn’t seen in a while said things like “Mako-san, long time no see!” The majority of the cast are those who I see often, so we just chatted normally. When Goku comes up in conversation, he feels less like a character, and more like just another person.
Was there anyone you were glad to be performing together with?
The ones that left the deepest impression were the trio of Shu, Mai, and Pilaf. They hardly appear at all [in the series], so it had been a while since I’d seen them.
What sort of things did you talk about?
We’d just chat normally, but we don’t share secrets much. When we enter the studio, we’re completely into our roles. Recording is often done separately, so this time, I didn’t get to see Mai. There are even voice-actors that I didn’t get to meet all the way to the end.
Yamadera-san played Beerus, God of Destruction, as a character with a playful spirit; what did you think of that?
Yama-chan‘s Beerus is very good. He’s wrapped up with me a lot of the time, so I really wanted to record together with him, but our schedules just wouldn’t match up, so I recorded first. I’ve worked together with Yama-chan on a variety of other works, so I recorded while imagining, “this line would probably come out like this”. I hear Yama-chan recorded while listening to my voice as well; before seeing the test screening, I was a bit nervous about it, but it was spot-on, so I was satisfied.
Nozawa-san, what sort of work is Dragon Ball to you?
Within me, it feels as though it’s just normally the same world as my own. I can’t think of it separately. It feels as though Goku is living together with me. Of course, there is the world of Masako Nozawa as an individual, as well, but it’s a world I can enter without feeling out of place. With the Dragon Ball family, even after it ended, there are always been other works [I see them with], and since we’ve made a family bond, it doesn’t have any special feeling. It’s just very normally, like they are living near to me. Within myself, I can’t think of it on its own, separate from me.1

What did you think when you heard this movie’s title?
Something like “Battle of Gods” was different from what I’d imagined. When I read the script, I was surprised: “Whaa? So it’s like that?” I thought, “you mean there’s a God of Destruction?” But once I saw the character, it was a perfect fit. You can’t see him as an enemy. He’s a god who’s not godlike. A god who’s absentminded, mischievous, and lovable. To Goku, I think he’s a good opponent, who he immediately takes a liking to. When it comes to Beerus, [Goku]’d probably be able to call him without an honorific, like, “Hey, Beerus!” But he’d use an honorific with Whis, and call him “Whis-san“. In Goku’s mind, they’d have that sort of position [relative to him].
Among the many highlights, what are the parts that you would particularly like people to look out for, Nozawa-san?
Well, I’d really like to say, “the whole thing”. As for my own highlights, I’d like you to pay attention to the family of the Toriyama World. There are top-notch cast members slipped in to even the background chatter, so it’s fun to try and find them. Each of them are there in the chatter, playing their own roles, [so you can] say, “Ah! Here’s so-and-so!” Normally, you can’t have that sort of thing.

I think that there are many people who watched the series in real-time when they were children, who are now adults with families of their own. Please give a message to those people.
I’d like you to come as three generations of parents and children! I’d like you to bring your grandmothers, grandfathers, children, and babies, too. I think babies probably won’t understand whatever it is they’re watching, but the memory of having received some kind of shock remains, right? So if you have a baby, I’d like for you to bring it with you.
The story had a lot of foreshadowing in it; please tell us what you are expecting from Dragon Ball from here on out, after this story.
After this battle ends, Goku says how he felt in his own way, so I believe he’ll be training again. Goku is always pushing himself higher. He has no ambitions to become greatest on Earth, or to conquer it; he’s just someone who feels happiness in becoming stronger. Also, he’ll probably stand up against a new, strong foe. I want to keep pushing myself higher, as well. I’d like to keep on living so that Goku and I can make it into the Guinness Book together.

Let’s go see Goku’s exploits in Dragon Ball Z: Battle of Gods, which both children and adults can enjoy, with the whole family!

The following translator notes are included for the benefit of the reader as supplemental information.
1 Nozawa appears to be having trouble getting the point across here with jumbled phrasings.
English Translation: SaiyaJedi
Back to Previous Page