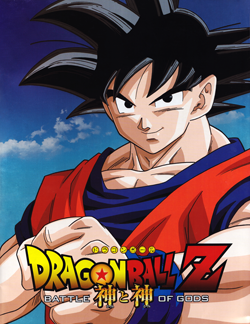 Apparently, it’s been 17 whole years since the last animated Dragon Ball movie! To be able to have a new work made after so many years and months have passed, I have to thank all the people who have given their support. For all the animation up to now, I’ve basically just left everything up [to the staff], so this is my first try at being involved starting from the story’s creation. At any rate, it was quite a long time ago that I drew Dragon Ball, so I had to start by working to remember it. I pulled out the comics [i.e., the tankōbon] of my own work, which it’s fair to say I never look at; and as I flipped through it, even though I’ve gotten older, as you’d expect of the original creator, I was quickly able to recapture the feeling from back then. The keywords this time, “God of Destruction Beerus” and “Super Saiyan God”, were suggestions from the scriptwriter, but they were good ideas for presenting a crisis for the main characters, who had grown so strong that they’d reached a point where there was nothing higher. I borrowed these ideas, and after first deciding on Beerus’ character design and background, I tried thinking up an original story, imagining it as though [the manga’s] serialization had continued. The God of Destruction Beerus, who I drew the design for myself (something I don’t usually do), is a terrifying opponent so overwhelmingly strong that he surpasses the dimension of the previous enemies. But it’s my trademark to not let things get too dark. At the very least, I’m satisfied that it’s been finished up as a very entertaining piece of work.

By the way, the battle scenes in the second half are particularly overwhelming! I was moved because the presentation exceeded my expectations. While I had expected, “It probably won’t be any good,” it was greatly different from a certain country’s live-action movie, which really was no good. Just as you’d expect, Japan’s animation is superb! Everyone on the staff, you really did a great job!!