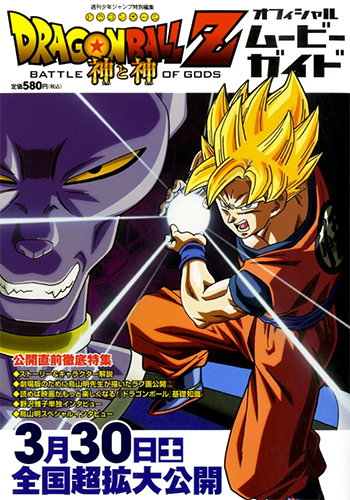 Creator Akira Toriyama-sensei participated in all aspects of Dragon Ball Z: Battle of Gods, with story and character design. Toriyama-sensei has left nothing out, telling of how the movie came to be and his struggles with it, as well as the background information he came up with in his head!!

Staking his life on stupid lines with scenario supervision
First of all, please tell us the circumstances around your first hearing about the new movie.
I think it was around 2011? It all started when I came to Tokyo, and my first editor1, Torishima-san, suddenly handed me the scenario and said, “read this!”… I guess? At that time I had no idea what it was, and when I asked Torishima-san what the scenario was for, I heard for the first time about how it was going to be made into an animated movie. (laughs)
So the first movie in a long time was already off to a hot start. (laughs)
Yes. Originally, I was only supposed to check over the scenario, but ended up doing more and more of all this other work. (laughs)
Please tell us what lines and things you were particular about while supervising the scenario.
I was conscious of having content that children could understand, and not getting too serious. Also, this time there is a “god” as the subject, I thought I should make it light so it wouldn’t get religion-y. And also, I was careful not to give them difficult, abstract/conceptual dialogue. At first, when I was doing the supervision, there were times when I struggled because I couldn’t remember what sort of personality a character had. But once I finally remembered, the characterization would already be complete, so it became quite easy. Rather than being particular about the dialogue, I’m always staking my life on stupid lines. (laughs) Actually, I’ve shied away from moving people, since way back. Even during the serialization, there were times where I would deliberately avoid making things emotional. There are many other people who would make people cry, or move them, so I’d like to stick with works of entertainment to the end.
Are there any other areas you struggled with in supervising the scenario?
It was my first experience with writing the scenario, so what I understood the least was, I had no grasp of how much writing would translate to how much length [on screen]. I had thought that the anime staff would further expand on the script I’d supervised, but it seems the scenario was actually so long that it had to be cut down. The anime staff told me that, in the first storyboards, where they had already cut it down somewhat, it was still over 120 minutes long.
How was the experience of having the scenario you supervised become animation?
When coming up with things myself and drawing things myself, nothing will come of it that’s more than what I’d imagined, but if I entrust it to other people, it’s fun how something might come out that’s greater than what I’d imagined. While writing the scenario for the fight scenes, I’d thought about what sort of visuals they might become, but the fight scenes were far more enjoyable than my own imaginings. I’m the type of person who isn’t bothered one bit about other people changing his own work, so it’s better if other people work on it to make it more and more interesting, and in that sense, it would have been fine if the people on the anime staff had changed it even more.
Please tell us the origins of the title this time, “God and God”2.
It’s purely because two gods face off against each other. I didn’t think deeply about it.
Why did you set the story’s time frame after the defeat of Majin Boo?
It’s when all the members [of the cast] were at their strongest, so I thought it was just right. If it were at the time of the final chapter, Goku would be heading off somewhere with Oob, after all.
Is Bulma’s birthday party held every year?
Bulma only has a party when she wants to see everyone, so she doesn’t hold one every year. She herself isn’t the sort of person who would want to go out of her way to throw a birthday party.

The model for Beerus, God of Destruction, is his pet cat?! A god, yet a character with humanity

How did you conceive of the new characters, Beerus and Whis?
I simply wanted to go with designs that I hadn’t done before. I’d done plenty up to now that were just scary, after all. This time, there are breaks in that fear, or rather, I felt that he simply had to be a character where you could feel his humanity. Initially, nothing came to mind that was human, so I modeled him on the cat we keep as a pet. In addition to that, I’ve given his costume an ancient-Egyptian motif. I made him feel as though he doesn’t look strong at first glance. I think he should have a sense of being scary, but with gaps in it. Whis, I designed because I wanted to bring out a handsome-fella sort of character. [I thought] I should bring out a sense that he’s not your typical handsome fella, but has some peculiarities about him. The design ended up being one I like quite a bit.

As for why I wanted to bring out a set of two new characters, rather than just one, is because with two, you can introduce what sort of personality they have through their conversation, so you don’t have to rely on narration. I’ve also tried to bring out two [characters] at a time as much as possible in my other works, as well. When I first saw the visuals for the Oracle Fish, I felt that its size was even smaller than I had thought. I hadn’t made a size-comparison chart for the anime staff in advance, so I supposed it couldn’t be helped. But the result was that the smaller size actually suited the voice of Shōko Nakagawa-san, who voiced the Oracle Fish, so I think it was fine.

This time, we get to see quite a few new costumes for familiar characters; are there any points that you’re particular about?
I’m always changing costumes and hairstyles, so rather than being particular, there are times when I can’t recall what sort of hairstyle they had. (laughs) When I handed the roughs over to the anime staff, there were even characters I’d given the wrong hair color to. (laughs)

Battle scenes with better visuals than ever before

What did you think after seeing the voice-actors’ performance?
Everyone was wonderful, but Masako Nozawa-san’s performance was particularly wonderful. I feel a sense of relief that it’s the same Goku as ever.
Please tell us your thoughts when you saw the actual visuals.
It was really enjoyable! The fight scenes in particular were something that exceeded what I had imagined when I was writing the scenario. I’ve never seen them fighting with that kind of power in animation before. It’s developed into a battle that the members of the anime staff really put a lot of ingenious things into.
Please give us a few words for the readers who are looking forward to its opening in theaters.
It’s the first movie that I’ve been involved with starting from creating the story. The members of the anime staff have also given their all. Please enjoy the first Dragon Ball in a long while!
The following translator notes are included for the benefit of the reader as supplemental information.
1 Akira Toriyama had three editors over the course of Dragon Ball’s serialization in Weekly Shōnen Jump. His first editor was Kazuhiko Torishima, who was also the man at Jump who first discovered Toriyama, and who served as his editor for all of Dr. Slump up until the end of the 23rd Tenka’ichi Budōkai in Dragon Ball. Toriyama’s second editor was Yū Kondō, who took over during the Saiyan arc and lasted up until when Cell reached his perfect form. His third editor was Fuyuto Takeda, who took over when perfect Cell appeared and lasted until Dragon Ball’s conclusion.

2 The movie is given two names even in Japan: a Japanese title of 神と神 (Kami to Kami; “God and God”) and an English title of “Battle of Gods”.