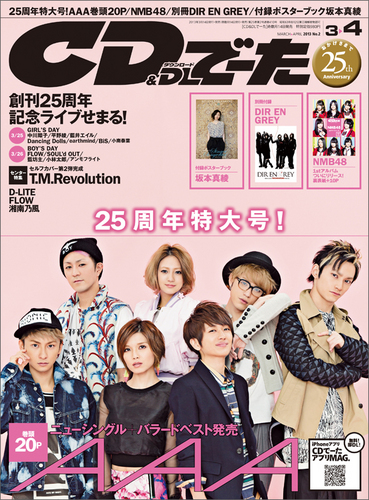 FLOW
The feeling of being there at a concert, twin vocals, and fan-interaction. That is FLOW’s “MAX!!!”

Can I just go ahead and say it? I think it’s an absolute masterpiece.
TAKE: Thank you very much.
Since it’s a work commemorating your tenth anniversary, we’d thought you might go the route of a big, conceptual effort. But it’s actually quite relaxed, and a lot of fun to listen to.
KOHSHI: Yes, it certainly is.
First of all, what sort of concept did you start out making it with?
TAKE: The title was there from the beginning, so we had the goal of it being an album that embodied the theme of all the things we’ve done over the past year. So, as the earliest project in the theme of FLOW THE MAX!!!, we had the concert, “Charging in THE MAX!!!”.
Right, right. The one where you performed albums that had already come out.
TAKE: At Shibuya O-nest, where we first had the opportunity to do a solo show, we played straight through five albums over five days; that was good. We didn’t get serious about making the album until after that, but being steeped in all our past songs, we were able to make new ones, and [we felt] we were able to connect the dots. The project that we did off one idea (laughs) became connected to a [new] work, as well.
Ah, I see.
TAKE: So, what we paid the most attention to in making the songs was a concert-like feeling of “being there”. And also, since we feel our twin vocals are the biggest strength in terms of FLOW’s originality, I think we paid more attention than ever to making use of those two voices in writing the songs. There’s back-and-forth and harmony, as well as “music done by six people,” with choruses for our sixth member, the audience, which was our biggest theme. [We felt], “that’s what FLOW THE MAX!!! is about, right?”
I’ll ask everyone this; first, GOT’S-san. Were you able to give your MAX?
GOT’S: I think I was able to give my max. Originally, when we were choosing the songs for this album, TAKE started by thinking about, “this song should have this sort of theme”.

TAKE: That’s right. We gave a theme of “MAX” to each and every song. For example, with “On my way”, it’s “MAX speed”. There was that sort of background theme for each song. We thought, since it’s the tenth anniversary, it would be great if we could embody that by making ten songs, and giving each one a MAX theme, wouldn’t it?

GOT’S: At first, we intended to decide on ten songs, but we started to feel that “we want to do more on this theme”, so in the end, it became 14 songs.

TAKE: As we were going, “that one, that one”, the number of songs increased. (laughs) In the middle of it, we had an encounter with Dragon Ball Z: Battle of Gods, and we ended up making a single for “HERO: Song of Hope” and “CHA-LA HEAD-CHA-LA”, so [we thought], “let’s just throw them all in!”

GOT’S: “That’s also ‘MAX’, so why not?” (laughs) I think that, over the past ten years, FLOW has had a variety of different songs. I think a band that’s this different might be rare, and I believe this is a good album that contains all of what we’ve done up to now, what we want to do now, and what new things we’d like to do in the future. I’m satisfied with it.

IWASAKI: After “Charging in THE MAX!!!”, which was all about ‘playing through five albums’, we also did “Cover THE MAX!!!”, where we did only cover songs, and going from there into making this album, in my mind, I think it was incredibly good timing. If you think of ten years as a cycle, I think we’ve probably made one full revolution. So we thought, if so, then next, we’ll go up by one, and start out running the second lap. Rather than making an awesome album to commemorate our tenth anniversary, it’s an album that we’ve made with the image of having shifted into offense, looking towards our next step.

KEIGO: We’ve come to adopt the words “FLOW THE MAX!!!” as our slogan for the entire year, and I think we’ve been able to carry our tenth year in a good direction. Since it’s a slogan we adopted in order to celebrate ten years with everyone, there was no weird sort of pressure, and we were able to make good on that potential, so maybe it’s connected to that result? To the question, “what sort of band is FLOW”, which we’ve been asked many times, right now, we can bring out this, FLOW THE MAX!!!. While it’s basically us having fun, each song has its own emotional expression, and I think this is an album where that really shows.

KOHSHI: It has this overly-ambitious title of FLOW THE MAX!!!, but on the contrary, we made it effortlessly. MICROCOSM and BLACK & WHITE were albums where we wanted to convey a message, so we seriously put our backs into it, but FLOW THE MAX!!! has a truly relaxed feel to it, and while it may not be that “flexibility triumphs over strength”1, I think it was good how we were able to make it by just cutting loose. Though if it gets a good response, we might think, “maybe not making an effort is the way to go.” (laughs)

They certainly are quite serious. Particularly MICROCOSM.
KOHSHI: Although I think it’s because we had those, that we were able to make this album. I think there are people who like albums like MICROCOSM, and I think there also people who like albums with a lot of elements of entertainment, like FLOW THE MAX!!!. You could say that, in the end, all music is entertainment, and that perhaps there was a period where we worked too hard to try and somehow give it meaning. (laughs) But this time was incredibly relaxed.
[Did you write] the lyrics with that sort of feeling too?
KOHSHI: Yes, we did. Without getting too worked up, we just sort of wrote what we wanted to write according to the flow. The title is FLOW THE MAX!!!, so there’s no particularly all-encompassing concept. I think people should be able to see the sort of feeling that the concerts are fun, and, “It’s our tenth anniversary, yeah!”
In the lyrics, there’s something I thought even more strongly [than before]. I’m not saying this because you have a song from Dragon Ball Z, but I thought that the famous thesis in past shōnen manga magazines, “friendship, effort, victory”, is right at the heart of FLOW. That no matter how the music changes, the message is always positive and passionate.
TAKE: It’s because we’re [a part of] that generation. (laughs) They’re eternal themes: friendship, courage, dreams, and such.

KEIGO: Part of it’s that we grew up taking in all that sort of thing; and now we’re around 35 years old, and it’s a special year, being our tenth anniversary, so with there being various things in our private lives, as well, I think that probably naturally comes right out.

TAKE: It’s an unchanging theme, but there aren’t many people pushing it forward. I’d be happy if we could act as a mouthpiece for it.

TAKE: But for our 11th year, we’ll have to go with something above MAX. …If you have a catchy word for it, please let us know. (laughs)

KEIGO: We’re taking suggestions. (laughs) Like, “How about FLOW THE [BLANK] for the 11th year onwards?” (laughs)

1. HERO: Song of Hope
“This is “Dragon Ball Z, MAX!!!”. We were shown the storyboards for the movie, and wrote it by expanding that image. It came out as a song with really unchanging themes, that expresses the things we’ve carried since ten years ago in a new form, and I’d like this one to become our trademark song going forward. (TAKE)
14. CHA-LA HEAD-CHA-LA
“It’s because we’re all part of the Dragon Ball generation. Well, IWA-chan alone is part of the Arale-chan generation.2 (laughs) It feels like we got a reward for what we’ve done these past 10 years.” (TAKE)

“I always sing it at karaoke; in my mind, it’s my best one. I was truly glad to have the privilege of covering it this time.” (KOHSHI)

The following translator notes are included for the benefit of the reader as supplemental information.
1 A quote from the Chinese classic, The Three Strategies of Huang Shigong.
2 Drummer Hiroshi Iwasaki is slightly older than the other band members, and would therefore also remember the Dr. Slump manga and TV adaptation, Akira Toriyama’s hit series before creating Dragon Ball.
English Translation: SaiyaJedi
« Previous Page
Translations Archive