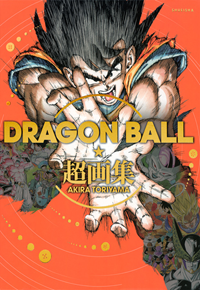 Now that it’s 2013, he reflects for us on his illustrations from the start of Dragon Ball’s serialization up to now.

The Boyhood Era, when Goku was Little
From the beginning of the manga’s serialization in 1984, was there anything you took care with, or had the image of, “I’ll draw it like this”, when drawing characters like young Goku and Bulma?
Dr. Slump was a (supposedly) stylish gag manga, so at the time, I was quite particular with the art when I drew it, but the Dragon Ball manga is an action manga. The most important thing is the sense of speed, so I didn’t really want to draw any illustrations that were overly elaborate. To the point that you could even say I didn’t have much interest in the art. Especially with things like color illustrations, putting aside whether they were good or bad, I believe I was always putting in more man-hours drawing Dr. Slump. I deliberately made even the main character Goku plain, doing things like giving him a simple style of eyes like a minor character, thinking that I’d put my all into his dialogue and movements. (Although contrary to my earnestness, it wasn’t popular at all at the beginning….) For that reason, I even told my editor, Kazuhiko Torishima-san, things like, “let me draw as few color manuscripts as possible for this manga”.

Even now, Dragon Ball isn’t much fun as a motif to draw illustrations for, but as a result, I think I was probably able to really loosen up and concentrate on the plot developments and action.

The middle of the serialization, where Goku became a young man

From 1987, Goku grew into a young man in the original manga; with the main character’s proportions changing so greatly, did it have an effect on doing illustrations?
If I left Goku with the same proportions as when he was a child, there would always be things difficult to show in depicting the fights, so I started wanting to make him grow by a lot. It was at a time when [Dragon Ball’s] popularity had [only just] started to stabilize, and manga where the main character’s appearance changed drastically were rare, so people like my editor were quite opposed to it. But, thanks to his getting taller, I came to be able to draw illustrations such as him sitting astride a motorbike.
How did you decide on the coloring of costumes, such as the main characters’ [clothes] and the Kamesen-school dōgi?
For the colors of the dōgi, the motif is naturally the color of the robes [worn by] Chinese monks, such as the Shaolin. The fact that it became red in the anime was always something I was a bit dissatisfied with.

The reason there are a lot of characters with strange colors, such as Piccolo Daimaō, Freeza, Cell, and Majin Boo, is simply because varying the colors made it easier to grasp their individual differences.

From 1994 onward, there are many works drawn on colored paper. In what way did this technique come about?
This technique of drawing on colored paper is a method often [used] in the world of design, so it’s not particularly rare. I believe I also used it often back during Dr. Slump.

There’s color in the base paper, which brings out a sense of unity in the coloring.

From 1995, you participated in the anime Dragon Ball GT as well. When drawing the Goku, Pan, and Trunks of the future1, was there anything that you decided, or paid attention to with regards to the designs?
It was right after the serialization ended, so I don’t recall drawing the designs for GT with all that much enthusiasm. I did my best and drew the design images that were requested of me, but this method of using colored paper has comparatively few merits for the trouble; perhaps it was so it’d look like I’d colored it in properly?

The digitally-colored new illustrations for the DB Kanzenban

Starting around 1999, you gradually shifted over to digital production. Tell us the story of when you began drawing digitally.
It all started around the end of Dragon Ball’s serialization, when I received from the toy-maker Bandai, of all people, what was then an expensive PC.2 I had them teach me all sorts of things about how to use it. I was incredibly grateful for this tool, as I had gotten a bit fed-up with drawing illustrations. At that time, if not for the PC, I think I might have completely lost interest in drawing. I don’t have to be constantly prepping and washing out coloring implements, after all. Anyway, Bandai did a lot of other things for me, as well, so I am truly grateful to them.
What sort of differences / gaps emerged between drawing by hand and [working] digitally?
Even calling it digital, I generally only used it to color in my manuscripts. I’d draw things using a pen, the same as I had before, then scan them in and color them with the PC — like that.
Have things like your use of color changed since you went digital? In the Kanzenban, you drew with what seems to be gradations in the use of shading. In your most recent illustrations, your use of shading has changed yet again; do you change it based on where it’s going to be published?
I don’t especially feel as though my use of color has changed, but the greatest merit of digital is that you can reapply [the colors]. More than anything else, I was grateful for the ability to change it until I got colors I was happy with, because it was often the case that I’d paint it in, and be shocked! at it being not quite there. The reason the way I do my coloring varies quite a bit is because I use [color] differently by case, depending on the request.

A new impression with Neko Majin

Starting in 2001, you also drew Neko Majin. Have you altered your drawing style in digital illustrations and manga?
The manga Neko Majin, I didn’t draw digitally. I drew it on manuscript paper, the same way I had before. In Neko Majin, I used, not my usual G-Pen3, but a felt-tip pen called “Pigma”, which I can use to draw in a variety of different widths. I don’t have any assistants, so after that, I’d digitize the finished manuscripts and do just the blacking and tone work via the PC. The only time I also do the linework digitally with a graphics tablet is when I’m drawing game design images or [standalone] illustrations. When it comes to manga, I still can’t bring out [a sense of] force in the lines at my skill level, so it would actually take longer [to do it digitally], but I’d like to give it a shot next time. In this way, I’ve tried out a variety of techniques since way back, but my style of drawing still isn’t set. It always feels like trial and error, but as for me, I believe that if I get complacent, it’ll be “the end” for my illustrations.

Visuals for the latest movie, with all the main characters appearing

In 2013, you drew a new illustration of the characters for the new movie4; how did you feel about drawing so many characters after such a long time?
As always, I didn’t like drawing the illustration [itself] (laughs), but sketching out the new characters’ designs, along with everyone’s clothing and hairstyles, was fun.
The following translator notes are included for the benefit of the reader as supplemental information.
1 Along with certain other elements, Toriyama had drawn the initial character designs for Goku, Pan, and Trunks in the TV-only Dragon Ball GT series.
2 Toriyama had mentioned in his interview from Daizenshuu 7’s Shenlong Times that this was a Macintosh computer, but did not say there at the time who got it for him.
3 A kind of metal pen nib which allows for very fine line work; probably the same “Zebra pen-nib” he mentions in the Son Goku Densetsu interview. It’s high-quality, but can be messy, as it involves dipping the pen in the ink, and Toriyama obviously did not relish the work involved in setting up beforehand and cleaning up afterwards.
4 This drawing was included both in the Chōgashū as well as the May 2013 issue of V-Jump (where it was presented as a B2 sized large poster).
English Translation: SaiyaJedi
« Previous Page
Translations Archive