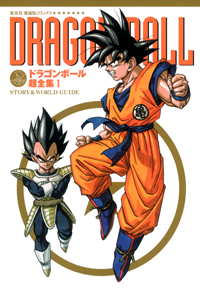 We hit up Akira Toriyama directly to interview him about a wide range of questions about Dragon Ball, such as the unknown private face of Goku & co. and the setup of the realm of the gods! We’ll close in on never-before revealed truths about the world of Dragon Ball, one question at a time!!

At times when there are no battles, or on days off, what sorts of things do the warriors do?
Goku, Vegeta, and Piccolo train; Gohan studies; Bulma does [scientific] research; Satan makes appearances at events; and Kame-Sen’nin watches videos.
There are a lot of mealtime scenes shown in Dragon Ball, but who’s the best cook?
The best ones at cooking are Gyūmaō and Yamcha, probably? For some reason, they have that sort of image.
Scenes involving Goku’s home life appeared in the manga, but what are things like at home with Kuririn or Bulma?
Kuririn’s family is an exceptionally ordinary household, but #18 is scary when she gets angry, so Kuririn goes out of his way a little bit for her. Bulma’s family has had a laissez-faire attitude for generations, but Bulma has complete control over things as a rule.
In the world of Dragon Ball, there are Earthlings in a variety of forms, such as animal-type characters. People such as the King and the director of the Tenka’ichi Budōkai were dogs; is there anything you do consciously when creating animal-type characters?
As for why I draw animal-type characters so often, I do of course like animals, but basically, it’s because it’s easy to do a greater number of variations. Dogs in particular have an image of being more loyal and purer than humans, so I make good use of them.
Are there any characters that were actually modeled on someone?
In terms of [character] models, I suppose “Beerus”, the God of Destruction, was modeled on the 14-year-old cat currently living with us. It’s called a Cornish Rex; it’s a bit of a rare breed. I’m getting off-topic here, but the other day, in spite of developing a serious illness, and the vet declaring it didn’t have long to live, it miraculously got better on its own, and the vet said it might be some kind of demon. Karin-sama is modeled after the cat we had before that.1 Apart from that, nothing else comes to mind. Basically, I almost never make someone [i.e., a particular person] into a model [for a character]. There may be characters that were influenced by something, but not anything specific.

It seems that there are quite a few kinds of Neko Majin2; do they all have the cheerful disposition and the strength of the main Neko Majin characters?
Many Neko Majin have a cheerful personality, but among them, there are also pessimistic ones, as well as quiet, intellectual Neko Majin. It’s probably all right to think of “strong” the standard power of the Neko Majin race. This is normal for them, from the start.
Are the Neko Majin a race originally from Earth?
Naturally, they are a race that has been on Earth since before humans. Among them, there are apparently even those who have been alive since that time. They are frighteningly long-lived, but as they are capricious, they never quite increase in number.
The aliens who appeared in Neko Majin and the aliens who appeared in Abale-chan look alike; are they the same aliens?
They do look alike, but they are different aliens. Or rather, the aliens I draw generally have this sort of design. At the time, I enjoyed drawing Neko Majin, so when aliens appeared in Abale-chan, I didn’t even intend to come up with a new design. (laughs)

What are the requirements for becoming strong?
There are physical limits to the strength of the body itself, so in order to overcome that barrier, it’s necessary to increase your “ki”. Normally, the more you increase your ki, the harder it is to control, so ki control is also important.
In the film Dragon Ball Z: Battle of Gods, coming out in March 2013, a new god, the “God of Destruction”, appears. In this [book], Kaiō-sama and Kaiōshin-sama are described as “Gods of Creation”, but do they have the power to create things like planets?
Rather than Kaiōshin-sama making planets, he is able to provide the impetus for them to be born. Also, he will sometimes divide up one planet and increase the number of planets. He will even do things like create life-forms, or transplant them from another planet, but his basic job is to watch over the numerous planets. Because the number of planets is so very large, the four Kaiō-sama help him out as well. They intervene if it appears that the world’s balance will crumble, but normally, they merely act in an advisory role for new life-forms, and don’t get involved. In order to provide a balance to the constantly increasing number of planets, the God of Destruction destroys [them], but he does not act on Kaiōshin’s orders; he destroys according to his own individual judgment. Except, he is capricious, so he will destroy even an important world without a second thought, or when he finds it bothersome, let someone else act as an agent of destruction.
The following translator notes are included for the benefit of the reader as supplemental information.
1 Toriyama is referring to Koge, the stray black cat Toriyama picked up one day, causing his assistant so much grief. He had mentioned on the title page of Chapter 150 that he drew Karin based on Koge’s sleeping face. Toriyama’s depiction of Koge herself, however, is basically identical to the black cat often found perched on Dr. Brief’s shoulder.
2 A series of eight chapters in total, published individually and later collected into a kanzenban release, starring various magical cats. Dragon Ball characters make regular cameos in the five Neko Majin Z chapters therein.
English Translation: SaiyaJedi
« Previous Page
Translations Archive