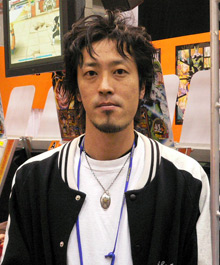 When I was in junior high- and high school, I eagerly read my favorite Dragon Ball every week in Shōnen Jump, and thought, “Toriyama-sensei‘s amazing; I wanna meet him.”

In prep school, and at university, while playing Street Fighter II with a friend at the video arcade instead of studying, I thought, “The person who made this is amazing; I wanna meet him.”

Ten years later…
To think that I’d be working together with all these people!!
Life is funny like that.
I made an amazing game together with some amazing people.

It’s different from the Dragon Ball Z games and fighting games up to now, so it appears to have unique movement, but once you get your hands on it, it’s surprisingly simple, so it’s a game that I can truly say with some confidence that it’s FUN!!! if I do say so myself.

Everyone, please play it a lot, and get stronger!! 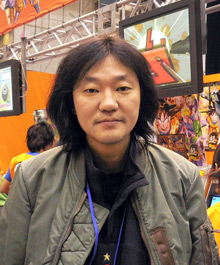 I remembered this just recently: it’s from about 20 years ago, when I had just joined my previous company1. My boss, O2, negotiated with Torishima-san of Shueisha, who was [Dragon Ball‘s] editor at the time, about making a game….

I couldn’t make one at that time, but I was able to make it a reality 20 years later. I had loved Akira Toriyama-san‘s art ever since that time, I’m really glad to be able to make [this game].

On this happy occasion, I was also glad to be able to work with Akira Nishitani of ARIKA for the first time in a long while. As always, he’s a man with a temper. The bright sparkling game elements this time are almost all his work.

I think we’ve managed to a make a game you can play again and again, so by all means, please try playing it! 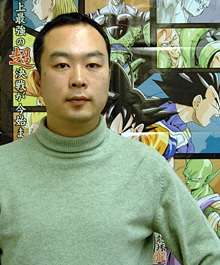 I made a fighting game for the first time in a long while.
Sure enough, when you’re making a new system, it’s pretty difficult.

At any rate, it was a string of trial-and-error. The idea itself for homing attacks was there from the beginning, but handling it was difficult, and the adjustments were really tough going. However, the many tweaks were worth it, and I managed to get a unique enjoyable element of this game, which is a weak dash leading into a weak homing attack launching into the air, so I’m satisfied.

Well, there’s still a mountain of other things I would rather have tweaked more, more, more.

It may be a bit difficult to understand how to play at first, but it is absolutely an enjoyable game, so everyone, please try playing it.
I particularly recommend buying the cards and playing.

The following translator notes are included for the benefit of the reader as supplemental information.
1 Funamizu had previously worked for Capcom on various Street Fighter and Vs. games
2 Presumably Yoshiki Okamoto
English Translation: SaiyaJedi
« Previous Page
Translations Archive