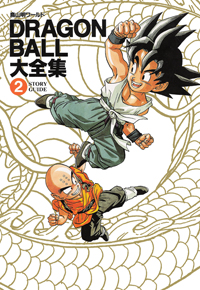 2nd Round — The Unpredictable Story

Why did the story of Dragon Ball begin? How was this fantastical story made? The answers from Akira Toriyama are here. You will know all about Dragon Ball’s birth and development…

Since this volume is a story guide, I thought that I’d ask you about things relating to Dragon Ball’s story. First of all, why did you begin the story of Dragon Ball?
I had just ended “Dr. Slump”, and for the time being I was thinking about what I should do for my next serialized work. I had many meetings with my editor at the time, Torishima-san. As it happened, at that time I loved Jacky Chan’s movies and had seen “Drunken Master” dozens of times. Since I liked that sort of thing, Torishima-san advised me to try and make a kung-fu shōnen manga, so I drew a one-shot called “Dragon Boy”. That got an incredibly positive response from the readers, so I decided to go that route for my next serialized work.
So from there you began to think of your new serialized work in earnest?
Since “Dr. Slump” had been in a Western scenery, I decided to change that impression and make my new work have a Chinese scenery. And if I was going to give it a Chinese feel, I thought I would make the story based on “Journey to the West”. “Journey to the West” after all is absurd and has adventurous elements, so I guess I decided to make a slightly modernized “Journey to the West”. I thought it would be easy if that story served as the basis, since all I would have to do would be to arrange things. (laughs)
It seems that initially you were going to have Goku be an actual monkey. (see p.90)
Yeah, to have it be completely like “Journey to the West”. This wasn’t very innovative, so I decided to have the protagonist be a human, and made him an ordinary boy. But I wanted him to have some kind of distinguishing characteristic.

The protagonist in “Dragon Boy” had wings, so I wanted a distinguishing characteristic in that sense, where you could tell it was him just by looking. So I gave Goku a tail. So even if he was hidden behind a rock, if you could still see his tail you’d know that it was Goku.

From there I added the Dragon Balls, and if you gathered all seven your wish was granted. I thought that if the characters went searching for these, they could go through a journey like in “Journey to the West”.

And so when it was still new in serialization, before the Tenka’ichi Budōkai began, the series had a considerable “Journey to the West” feeling to it.
Bulma was Tripitaka, Oolong was Zhu Bajie, and Yamcha was Sha Wujing. I initially thought that I’d end it after they finished collecting the Dragon Balls.
And then the Tenka’ichi Budōkai began. But why did you do that sort of a development?
Up until the Tenka’ichi Budōkai began, the series hadn’t been all that popular. That’s what Torishima-san had told me. “Your protagonist is rather plain. That’s why it’s not popular.”, he said. Personally, since I was doing a fighting story for this series, I had intentionally made the protagonist’s clothing excessively plain. So this annoyed me, but then I figured it out. “Well, let’s increase its popularity” I thought. When I had designed Goku’s character, the words that best represented him were “I want to become strong”. So I thought I’d bring that to the front. Even during “Dr. Slump”, the tournament-like events such as the Penguin Village Gran Prix or the Mini-Event had been amazingly popular. So I’d simply make the story into a tournament format. From there the Tenka’ichi Budōkai was born. I temporarily withdrew the other characters besides Goku, brought back Kame-Sen’nin, and added Kuririn as a new character. From there it got popular before I knew it.
Still, unlike regular protagonists, Goku certainly didn’t win the championship.
Yep. It took him until his third try to finally win. Everyone around me was saying “I’m sure Goku will win in the end.” Even though I had wanted him to win, but since I’m perverse, when they said that to me I went “Like I’d let him win!” (laughs)
The Tenka’ichi Budōkai was the first turning point. And then the Red Ribbon Army appeared.
The Red Ribbon Army was the same as the Tenka’ichi Budōkai, it just wasn’t in a tournament format. At that time, there was a game for the Famicom called “Spartan X”1 which I often played. Strong enemies came at you real quick and you beat them up. It was even based on a kung-fu movie. Playing that showed me the visuals for a different scheme than the tournament. That’s where Muscle Tower came from.
And then at last Demon King Piccolo appeared.
With all the villains up to that point, there was always something likable about them. So Demon King Piccolo was born from me trying to create a truly bad guy. That period was the most interesting to draw.
From there, the enemy characters rapidly began to escalate.
Having become the strongest on the Earth, Goku and co. had also beat the Saiyans who came from outside of Earth and then they went out into the universe. I came up with Freeza around the time of the Bubble2, and the land shark was the worst person of all. So I made him the #1 land shark in the universe. But merely escalating the enemies was a pain, so I brought out the Ginyu Special-Squad. My son really loved sentai3 stuff, and I always watched it with him. Well, I brought that in. It’s put out by Toei, same as the Dragon Ball Z anime. (laughs)
The next to appear where the Artificial Humans and Cell.
Since they had become the strongest in even the universe, they next had to surpass time. So with that I did time-travel stuff, but it was really rough. Time paradox, is it? I quickly got bogged down.

I basically only thought of what I was doing for that week. Even I didn’t know what was going to happen the next week. I’d draw the story like this, but I’d always discuss it with my editor to see what I should do for next week. (laughs)

And then the Cell arc ended. Did you think that everyone felt you would put Gohan into the leading role?
I intended to put Gohan into the leading role. It didn’t work out. I felt that compared to Goku, he was ultimately not suited for the part.
Incidentally, who is your favorite character?
Yeah, I guess I like Piccolo the most after all. Out of all the enemies, Demon King Piccolo is the one I like most, and even after that I like Piccolo the most. I like Piccolo about the same as I like Goku. With Vegeta, well, I don’t like him all that much, but he was extremely helpful to have around. For the recent stuff, it was fun drawing Satan. When I first brought him out, I didn’t think that I would end up making Satan that important of a character. I thought he’d just be a one-shot character.

Satan is like that, but thinking up worthless gags is more enjoyable than doing the fight scenes. (laughs)

That all really took off with Gotenks. There are legends that your editor Takeda-san would crack up each week when he saw the storyboards in the editing department. (laughs)
I suppose I am a gag-manga artist after all. (laughs)

But then after all, I’m always thinking of how there are a lot of guys on our side, but only one enemy. If you think about it, isn’t it unfair? (laughs) They can just gang up on him. (laughs)

So it’s like Goku’s line at the end of the battle with Majin Boo.
That’s right. He said “You did well all on your own”. I suppose that Goku’s motive was that no matter what kind of enemy there was, he wanted to fight them one-on-one.
Looking over the entire work, Goku always wished for that. Today has been a very valuable conversation, so thank you very much.

The following translator notes are included for the benefit of the reader as supplemental information and were not originally published in the daizenshuu.
1“Spartan X” is the Japanese name for a Jacky Chan movie known in America as “Wheels on Meals”. It was adapted into an arcade game which was also known as “Spartan X” in Japan, but was called “Kung-Fu Master” in America. This was ported to several home systems, including the Nintendo Famicom. The elements of the game that inspired Muscle Tower were actually taken from the Bruce Lee movie “Game of Death”, where Lee’s character and four companions must fight their way up a five-story pagoda.

2The “Bubble” refers to Japan’s economic bubble from 1986 to 1990, which was a period of unrestrained financial speculation. Most of the speculation was on real estate: buying up pieces of land in the hopes of selling it for a good price. While for awhile real estate prices soared, in 1990 the bubble burst and Japan entered a period of economic depression. Freeza’s business of attacking planets in order to sell them for a good price is similar to the practices of a land speculator. Freeza made his debut in Dragon Ball sometime between late 1989 to early 1990, towards the end of the Bubble.

3Sentai (or “Super Sentai“) refers to a genre of Japanese children’s television programs that feature teams of costumed superheroes battling monsters. These shows are produced by Toei, owner of Toei Animation, the animation studio responsible for Dragon Ball, Dragon Ball Z, and Dragon Ball GT. Footage from Japanese sentai shows were edited, dubbed, and combined with new footage of American actors to create the Power Rangers. Sentai shows typically feature teams of five costumed heroes, each one a different color, who fight using elaborate poses that originated in Kabuki theater. The connection to the Ginyu Special-Squad should be rather obvious. The Great Saiyaman also shows a strong sentai influence.