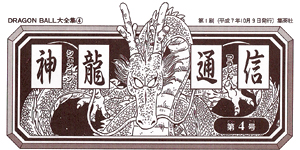 Emi Tōnosu (Third Place in the Tenka’ichi Test) — Tōnosu’s favorite character is the Trunks who came from future.

Hokoto Masumoto (Second Place in the Tenka’ichi Test) — Masumoto’s favorite character for the first half of the story is Tao Pai-pai, and for the second half Vegeta.

Three representatives of the fans who love Dragon Ball more than anything talk with one another.
For this time’s round table, we’ve assembled three people who could be called fans among fans. Because they’re fellow fanatics, an extremely deep conversation will unfold!

This time, we’ve gathered those who got the top results in the “Tenka’ichi Test”, a Dragon Ball knowledge competition. The 1st place winner, Yumika Ōya-san, couldn’t be here, so she left us her comments. In her place, the passionate Dragon Ball fan “Dragon Suzuki”, Suzuki-san of Bandai, is participating. So then, introduce yourselves, and tell us a scene from the 10 years of Dragon Ball that has stayed in your heart.
Suzuki: I’m Suzuki, and I make Dragon Ball-related video games at Bandai. A scene I intensely remember is during the battle with Ma Junior, when you think Goku has won, and then with a “ZUGYUUH” a beam pierces through his chest. At the time, I was in my second or third year in university, and I bought Jump because I would always read Dragon Ball while standing in the store. With that chapter only, when I read it I felt sick, and threw up in the supermarket’s toilet. That was the first time a manga made me feel that way.

Tōnosu: I’m Tōnosu, and I came in 3rd place in the Tenka’ichi Test. An enduring image for me is when Kuririn smashed No. 18’s shutdown controller. After that, I guess it’d be when Trunks was killed, and Vegeta went after Cell in a frenzy. Seeing those scenes, I thought that Dragon Ball was somehow extremely human, and I came to like it even more.

Masumoto: I’m Masumoto, who came in third place in the Tenka’ichi Test. What I like is the period when they’re being trained by Kame-sen’nin. While they’re training by swimming 10 laps across a lake, Kame-sen’nin says, “For some reason there are sharks in this lake. Watch out!” That’s a very Toriyama touch.

Masumoto: The Dragon Ball characters are fairy tale-like at first, but they rapidly become realistic. The easiest thing to see this in is the way their muscles are drawn. From the time Freeza first appeared, the muscles began to be drawn accurately. Around when Goku and Freeza had their showdown, the way the biceps and deltoids were connected became faithful to the real thing.

Suzuki: Yeah, the anatomy up until then is amazing. However, the drawing style really did change.

Tōnosu: I read it simply because it was funny and didn’t think about difficult things like that, but I cried when the characters died…

Suzuki: Dragon Ball made me cry lots of times as well, even though I was a college student or a company man. Let’s see, how many times did I cry…? Counting, I guess it’d be 5 or 6 times.

So then, let me ask you about when Dragon Ball was heading into its final chapter.
Suzuki: Because of my job, I found out a little early that it was ending. But the final chapter was good. The title page has the same composition as the cover to the first tankōbon. The sepia-toned scene of Bulma and Goku meeting for the first time was also deeply moving. I bought around 8 copies of Jump from when the last chapter came out, and stored them in my house.

Masumoto: A few chapters before the final chapter, there was a part where Upa appeared, and I thought “Is it already over?” But from the start of the Boo arc, I thought “surely it will end with this”. I want Toriyama-sensei to take a restful vacation, play with his children, and then begin a new serialization when he feels like it.

Tōnosu: I feel that Toriyama-sensei must really be tired after 10 years. Right now, my meager hope is that he will draw another manga with fantastic characters.

Thank you very much for today.

Robo-Toriyama:
Like I said last time, I’ve decided to pass on “Me These Days”. I mean, come on, I don’t have anything special to write about!
With that in mind, this time, I’ll seriously introduce the main tools I use when drawing Dragon Ball!
Try using it as a reference and drawing your own!

It’s “I Love Dragon Ball”, where very well-known people explain their love of Dragon Ball. For the fourth one, it’s Momoko Sakura-sensei, creator of the extremely popular manga Chibi Maruko-chan. 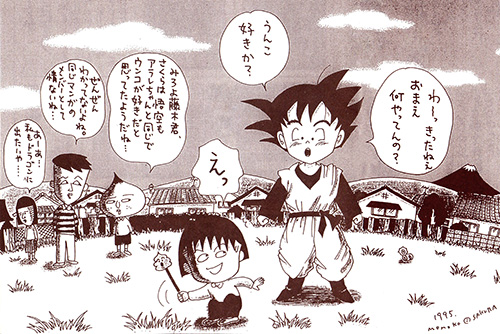 Son Goku: Ugh, gross. What’re you doin’? You like poop?

Fujiki: She just doesn’t get it. I’m ashamed to be in the same comic as her.

Noguchi: Aww, I wanted to appear in Dragon Ball, too…